Seven Things Darth Vader Can Teach Us About Depression 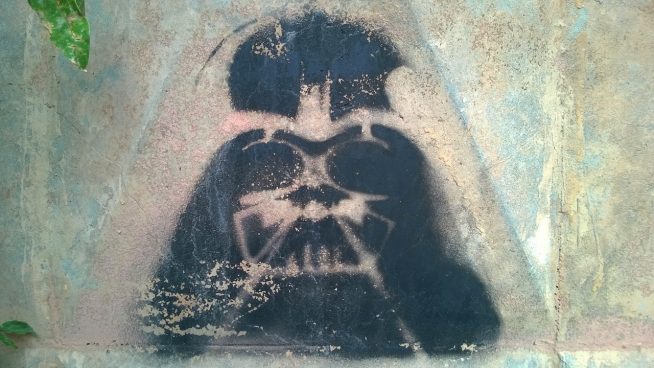 Men aren’t very good at accepting the truth about depression. Many men don’t even believe that it exists, considering it to be a fiction created by weak minded fools that, in reality, just need to get a grip of themselves. After all, we all have bad days but real men get on with it, right?

I find their lack of faith disturbing.

As a man (last time I checked) that has battled depression, I don’t have the luxury of doubting the existence of the dark side. I want more men to acknowledge its existence, so that they might recognise its presence should it descend upon them, or a friend, or a family member. Should its dark cloak wrap itself around them, I want men to feel able to seek help, unencumbered by the fear of judgement and the mortal risk to their perceptions of their masculinity.

There’s only so far that the anonymous voice of an average Teesside bloke can travel. So, in my efforts to reach as many men across the galaxy as possible, I’m enlisting a little help from everybody’s favourite Dark Lord of the Sith. And if I can’t persuade men of the reality of the dark side, then perhaps he will.

Here then are a few lessons that Darth Vader can teach us about depression.

1. You don’t know the power of the dark side

You want to get out of bed. Get a shower. Have something to eat. Play with the kids. Hell, you even want to go to work. But you can’t. It takes every single ounce of your will to complete even the simplest of tasks. This is very difficult to comprehend unless you have found yourself in the grip of the dark side. And that’s fine, experience is our greatest teacher and it can be hard to believe in something that is so alien to our own reality.

‘Kid, I’ve flown from one side of this galaxy to the other. I’ve seen a lot of strange stuff, but I’ve never seen anything to make me believe there’s one all-powerful force controlling everything. There’s no mystical energy field that controls my destiny.’ (Han Solo)

But as Han Solo discovered, just because you haven’t seen it, it doesn’t mean it isn’t there.

2. Its grip chokes, but is invisible

Depression grips tight, choking you. It often strangles your power of speech, both in the sense of your physical ability to speak, and in your willingness to release the words that will invite the stigma that can greet them. Despite its power, this grip is invisible. And yet, despite the lack of obvious physical signs, we can see its effects, alerting us to its presence in our lives and the lives of those around us. Only with awareness comes such vision.

3. Take off your mask

It is only when we feel that we are in a world that cares for us, that really sees us and that recognises that we are in  the grip of a power beyond ourselves, that we can remove the mask that we wear to enable us to function. Only when we can admit to the struggles inside – both to ourselves and those that can help us – can the mask be removed, enabling us to face the truths of the illness that it hides.

Just as Darth Vader’s suit of armour keeps him alive, so we must find and cloak ourselves in the armour that will protect us and keep us well. Sometimes, it will keep us alive. Mindfulness, meditation anti-depressants, exercise, good nutrition, counselling, CBT, friendships, spiritual and religious beliefs – everybody’s suit of armour contains different parts. The good news is that there are plenty of parts with which we can construct our armour, we just need to find the pieces that fit us best.

5. You are unwise to lower your defences

Our armour isn’t just for when we are ill. Getting well takes us to the light side, but we must retain what we have learned about our illness and ourselves, and wear our armour daily, if we are to prevent the dark side from rising again.

6. There is still good in you

Luke Skywalker never gave up on Dad. Despite all of the evidence to the contrary – blowing up planets, encasing his best friend in carbonite, chopping off his hand, raging tyranny across the galaxy, that kind of thing – he never stopped believing that there was good in him. One of the greatest gifts that you can give to a friend or family member that is suffering with depression is being there for them and believing in them, especially when they don’t believe in themselves. With that simple act, you may even save their life.

Luke was right about him wasn’t he? He was right. If you’re suffering with depression, remember that. Despite being cloaked in black for so many years, despite the dark side having appeared to have consumed him completely, the light was always there. Somewhere deep inside, it never left him. When consumed by the darkness of depression we lose ourselves completely in its shadow. No matter how dark it gets, never forget that the light is still in there. YOU are still in there.

May the force be with you.

Matthew Williams is an author, blogger, speaker and coach. He lives in the North East of England with his two young children. He is passionate about positive change and turning life’s challenges into lessons for creating a better future. He hopes that by writing about his own experiences he will be able to inspire others to make positive changes in their lives. His first book, Something Changed: Stumbling Through Divorce, Dating and Depression, is available now.