The Year I Spent Growing My Business Was the Scariest, Most Isolating, and Best Thing I’ve Ever Done 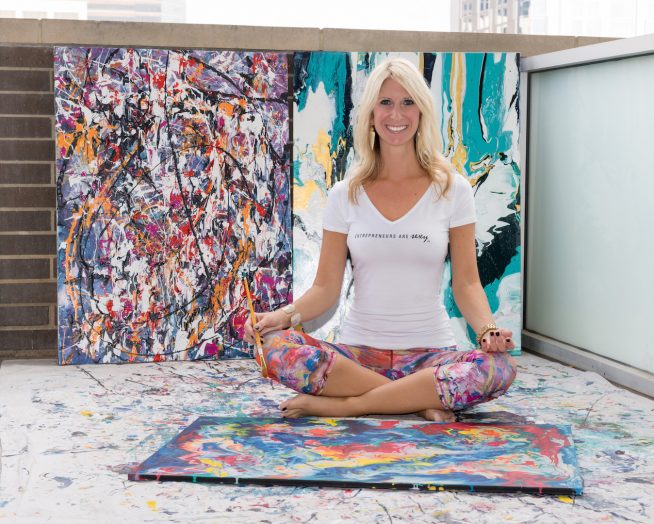 If there’s one thing I’ve learned from spending years talking to women about their goals, hopes, and dreams as a professional coach, it’s that we all dream about quitting our jobs and starting our own businesses. There’s a certain kind of romanticism surrounding the idea of being your own boss: working out of cool coffee shops, exchanging ideas with other liberated entrepreneurs, and getting to decide what to do rather than being told.

A little over year ago, I had a crazy idea for a new business venture. I have my coaching business, and I had been an artist for a few years, producing abstract paintings that women especially seemed to connect with. I visited a costume gallery on a trip to Florence, and that was the first time it occurred to me: Clothes can be works of art too. Upon my return to the States, I couldn’t get the gallery out of my head. Then I thought: What if I started a yoga pants brand, and printed my artwork on the pants? Like the costumes, my pants would be wearable art.

Thus, my brand, Beauty and the Mess, was born.

Or at least, I wish it was that easy. In reality, that spark of an idea set off a year’s worth of soul searching, researching, and much of the time, feeling way out of my depth. It’s one thing to think, “Gee, wouldn’t it be great to put my paintings on pants?” It’s another thing to research manufacturers, learn about tech packs, offshore shipping, and spend months trying to get information and advice from anyone who would listen.

Learning so much about a process I was completely unfamiliar with required a serious growing period. I began many days with a to-do list filled with things I had never done before and had no idea how to tackle. I ended up shutting myself off from friends and family to focus, spending hours upon hours working from the coffee shop near my house. I even remember one night, after doing coaching sessions at the Texas Women’s Conference, I left early to go back to work at my coffee shop, rather than staying to network like I normally would. The coffee shop became my cocoon.

The funny thing was, that over the course of several months of my coffee shop shut-in, I began to make friends with the other regulars. I soon found that several of them were also entrepreneurs. They became my cheering squad and sounding board, providing advice when I needed guidance and buying me cookies when I needed encouragement.

This was one of the first lessons I learned about building a business: no matter who you are, you need help. More importantly, you need to find the key people who can provide it.

For me, that meant meeting Mike, who founded a boxer company. He was the first person to tell me, “Robin, you can do this,” when I explained my wild idea to start a yoga pants company. He gave me vital insights into how clothing manufacturing works.

Then there was Chelsea, who helped me sketch out my designs.

Then there was Ingrid, who introduced me to the company that would ultimately become my manufacturer. Though I was a little small potatoes for them—they are used to working with much larger brands who want garments made in units of thousands, not hundreds—they took me on. It ultimately ended up working for the best: in exchange for working with me, I provided feedback to create a platform for them to engage with first-time designers. Not only am I able to get my pants made, but I’m able to pave the way for more entrepreneurs to begin manufacturing.

Then there was Meredith, who helped design and launch my website, so that I could begin creating a platform to market and sell the pants; Jared, who took my beautiful marketing photos; and Lyn, who taught me how tell my story and describe my brand.

The team around me helped tremendously, and opened doors that could’ve taken years for me to break through on my own. Still, the learning curve was steep. There were many times where I felt afraid and unsure, such as all the times I went back and forth with the manufacturer over the sample fabric swatches, which had come out looking nothing like my original painting. But even when I was going through the ninth iteration of the print, I had my coffee shop support team there to tell me to try for a tenth.

They kept me moving forward. The other thing that kept me progressing was my sense of purpose. Which brings me to lesson number two: when starting a business, know your “why.” I knew why I was trying to launch a yoga pants brand—the tagline of Beauty and the Mess is “passion over perfection,” a message I want to share with as many women as possible. Whenever I felt overwhelmed by the number of things I didn’t know, I remembered my mission.

The last thing I learned throughout the year was that you just have to keep going. I had no idea what I was doing most of the time, but I knew that if I kept taking one small step forward every day, eventually I would get somewhere. And after twelve months of trial and error, I finally received a box in the mail from my manufacturer. Inside: my pants, printed exactly as I’d envisioned them.

Throughout the course of the year I realized that launching a business is so much more than having a good idea, or even a good work ethic.

Launching a business requires passion and teamwork—and the guts to keep moving, even when you don’t know how. @RobinEmmerich (Click to Tweet!)

My pants are now on sale on my website and on Amazon (which, by the way, was a learning curve of its own), and I’m really proud and grateful every time someone buys a pair.

Even though the year was hard and scary, spending a year on a new, unfamiliar venture was honestly the best thing I’ve ever done. And even if I don’t continue making yoga pants forever, the lessons I learned on the way to building my business are going to stick with me always.

What’s a business idea you’ve always dreamt of starting, but are scared you’ll fail? Let me be the first one to say: you can do it. Just find the passion, the team, and the wherewithal to make it happen.

Robin Emmerich has spent close to a decade coaching some of the most successful women in business. Even with their considerable success, the common denominator is that as much as they seemed to be cruising through life on the outside, they were melting on the inside. It’s why Robin just launched Beauty and the Mess—an athleisure brand creating a sisterhood who understands that life is messy and difficult and challenging, but together, can find the strength to prioritize passion over perfection and fearlessly seek beauty in their everyday lives. She currently offers the CIJourney online course, based on the famed Stanford Masters Degree Course, ‘Creativity in Business,’ individual coaching and worldwide retreats. Connect with Robin at robinemmerich.com on Instagram, or beautyandthemess.com.