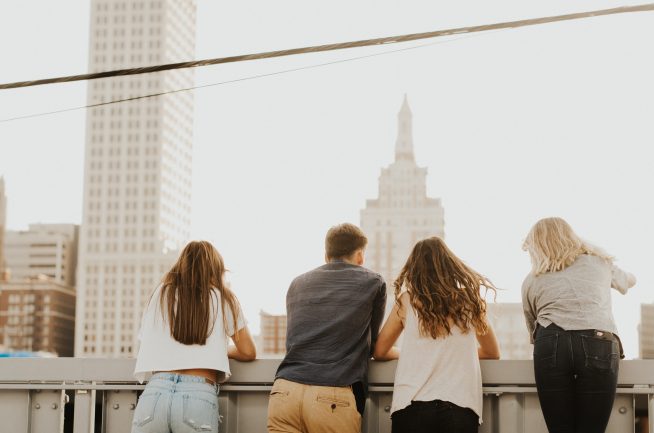 Shared households are becoming an increasingly substantial component of modern society. The Pew Research Center recently published a study that states one-third of young adults live with another adult who is not their college roommate or significant other.

While the trend first became noticeable in the aftermath of the Great Recession, it has only continued to become a commonplace part of our society. Not only are there plenty of millennial-aged roomates, the research points to the reality that children are moving back with their parents, and surprisingly, that parents are also moving in with their adult children. More than 57 percent of homes have multiple generations living in them.

Indeed, after I graduated from college my college roommate and I made the choice to remain roommates. A couple of years after we had graduated, his girlfriend moved into our home as well. While they shared bedroom space, everything else from the bathroom to the living area was communal.

Over the course of the next several years, I would come to learn a lot about what was required when adults, especially those who care about dependability and communication, all live together.

There are plenty of benefits that come with having roommates, especially if those roommates are individuals who make a habit of loving and affirming you. However, even for those of us fortunate enough to live with some of the people we best get along with, it can be a challenge.

Creating and committing to healthy boundaries is an essential component to ensure that everyone has a clear picture of the appropriate expectations so that, at the end of every day, each individual is confident they have a living arrangement wherein they’ll feel respected and validated.

The challenges often occur because the physical overlaps with the emotional. So, if we do not feel our space is respected, then we often interpret that to mean we as individuals are not respected. A large amount of shared living space conflicts arise because roommates fail to see the significance of respecting each other’s literal boundaries.

Each person should know which spaces in the house belong to them, and where they do not have to worry about sharing things or having their belongings tampered with.

My friend’s girlfriend was far more prone to spreading out and was less likely to naturally contain her belongings. Early on, there were times when there wasn’t a single bit of space in the bathroom, other than the floor, to set my toiletries.

However, when I called attention to the problem, we worked together to find creative solutions that worked, even in our fairly small living quarters. Even if you’re sharing bedrooms and thus storage spaces, you can utilize those in way that ensures everyone’s items are kept separate.

Some life-changing small space hacks include:

Even if you’re sharing an open-living plan home, you can invest in portable dividers if the group as a whole agrees it would benefit everyone. Ultimately, this is so important because it enables everyone to maintain the space they need for privacy and downtime.

Creating guidelines that govern the shared living space means that everyone is on the same page and everyone knows what they can expect from those they share a home with. This should be done with the mentality that the end goal is to create unity.

Guidelines for Running the Home

Running a household, no matter the context of the relationships present, is a team effort. If individuals are going to thrive, than everyone needs to agree to maintain certain standards and work towards similar goals.

When it was just my friend from college and I, we sometimes generated conflict, not because one of us had malicious intent, but because we genuinely were not on the same page in terms of these goals and expectations, thus when his girlfriend moved in we knew we had to implement a few rules to ensure the peace. Those truly saved the relationship several times.

Paying bills: Agreeing on what this looks like should be non-negotiable. Everyone should know how much is due for what, and when.

Cleaning house: In community spaces, there needs to be a communal effort to maintain the cleanliness and organization of the home. This is not about who has more of an aptitude for cleanliness; it’s about everyone being ready and willing to respect others. As with the finances, everyone should know exactly what is expected of them.

These are the two primary areas where conflict can occur and disrupt the peace of a home.

If members of the house try to make this about ensuring that their personal preferences are met before anyone else’s, it will create division and conflict.

Schedules: Everyone should be willing to respect the schedules of their house mates. So for example, if someone has to work a swing shift, their ability to use the common area to get ready shouldn’t be hindered. If someone has to get up early, they shouldn’t be kept up by unnecessary noises late at night.

Having company over: When having people over it is important that everyone is comfortable with the guests, and that the guests understand the boundaries that apply. When they’re visiting, their host needs to make sure they abide by the guidelines.

I am an extrovert and have always loved having friends from near and far over. A lot. But, I quickly learned that for my introverted roomates, it wasn’t just that their preferences were different, sometimes the amount of company I had over at one time made them downright uncomfortable. I had to make an effort to make sure that they were always prepared, and that my guests understood how to respect my roomates’ space.

Property: At times, property is a grey area. This typically happens because housemates either share what they have, or make large purchases together. It, again, goes back to expectations. If someone is willing to share an item, they need to lay out in advance when they’re not okay sharing. If a purchase is made together, everyone needs to agree before buying the item, what will happen if the group does not continue to remain roommates. Will they sell the item? Will one person pay the other two to take full ownership?

The key to maintaining guidelines that pave the way for healthy boundaries is for all parties to go out of their way to communicate often and well.

Respond Well When Boundaries Are Broken

There’s value here in again outlining what will happen when a member of the household continually disregards the boundaries that have been agreed upon. If you’re going to go through the work of establishing what you all need to cohabitate in a healthy manner, then you also need establish what it will look like if those agreed upon guidelines aren’t met.

Are the boundaries fair? If someone continually fails to uphold their end of the bargain, it’s wise to initially treat them the way that you would like to be treated: give them the benefit of the doubt. Perhaps, things aren’t going well, not because a housemate is selfish or careless, but rather because they’re attempting to uphold something they can’t actually do.

I generated a reputation for failing to take the garbage and recycling to the street Monday nights. Often, Tuesday night would roll around and instead of empty bins, we would have to wait an entire week to have it taken. But, Mondays were always 10 hour work days for me, and I would come and immediately crash. Communicating that allowed me to switch a couple responsibilities, so that that stopped happening and everyone benefitted.

Is the problem stemming from a deeper issue? While this may not ultimately change the end result, it is always beneficial when dealing with other individuals to determine the root of their behavior. More times than not, a person acts badly for reasons that are more complicated than they initially appear.

If you’re living with someone who consistently makes late or insufficient rent payments, is it because they don’t think they’re responsible for their share? Or do they lack the funds because they can’t hold down a job?

What are your options?

While the way you respond to problems is dependant on each specific situation, it should be noted that maintaining boundaries and looking out for a struggling housemate can coexist. Even if things become so dire that you decide moving out is the best option for your well-being, you can still opt to exemplify the type of roommate we should all be.

If things aren’t going well, the first step should virtually always be to communicate. Ask questions that will help you find common ground, and understand the other’s perspective.

Attempt to create goals that will allow you to move back onto the same page.

And then you have to decide. If no changes are made, are you willing to live with the whatever the problem may be? If you’re not, it may be time to move on.

With the right approach, a multiple adult home can provide just the right amount of financial stability and emotional support. A willingness to give it a try can result in needs being met that couldn’t be met in any other living situation.

In my experience, this was true. My friend and his girlfriend — who also became one of my close friends — are still some of the most important people in my life. There were plenty of times we could have thrown in the towel, but we always sought to resolve conflict respectfully, and thus the situation not only granted good friendships, but also the ability to actually save some of what we were earning, early on in our careers.

However, it does require a willingness to compromise and embrace flexibility. It’s a situation best suited for those who have the capacity to constantly assess how their behavior and circumstances impacts those around them. And ultimately, those most likely to make it work are those who are willing and able to set healthy boundaries.

Devin Morrissey is a writer stationed in Boise, ID who crafts pieces about money management (for individuals and businesses) and personal health. When he’s not writing, he enjoys hiking, riding his bike through the dirt paths of the Boise foothills, and camping with his dog Scrummy.