Why a Bouquet of Flowers Broke My Heart 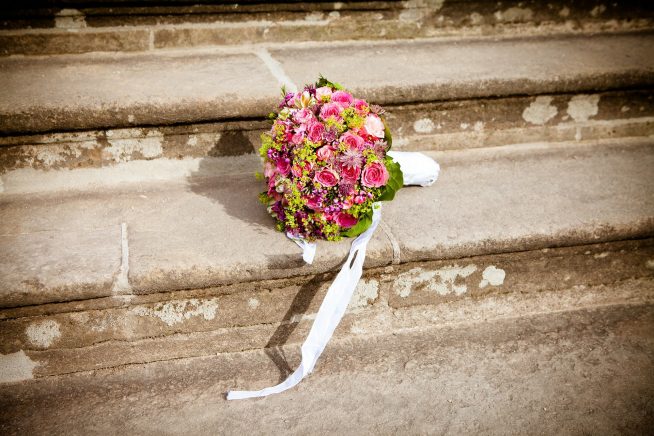 Today I heard a radio ad about flower deliveries through the letter box. This didn’t leave me with mixed but very clear feelings. You draw your own conclusions. But it reminded me of a recent flower delivery, which left me feeling aghast and disturbed.

A few weeks ago my mother ordered a hydrangea plant at her local florist for me as a surprise. This was to be arranged via an international flower delivery service.

The next day I found a hand-tied bouquet of blue-white hydrangeas outside my front door with a little card containing a greeting from my mother. There was no information regards which florist delivered it, and I don’t have any nearby where I live.

It was a big bundle of hydrangeas held together with robust fern. I cut the stems and found a vase just about big enough for this gift.

I cleared a special space for the flowers, so they had room to breathe and shine the warmth they were intended to bring into my home and heart.

My mother was surprised, when she heard about the bouquet. A bit of a waste of money, as the pot plant lasts longer and most of all, it has become a bit of a family tradition. She complained and was told a plant would be sent at no extra cost. So far so good!

After a few days some of the flower heads in the bouquet started to wilt. A bit too soon for my liking, but hey.

I untied the bouquet and noticed blue colour on the fern. At closer inspection I noticed what had not been so obvious from the start, that the blue hydrangeas were actually white by nature. I had been sent spray painted flowers.

Call me naive, call me out of touch. It had never occurred to me, that someone would want spray painted flowers or plants.

Having checked it out on the internet, it seems to be quite common, even among florists – spray painted flowers.

I am sorry – actually, no, I am not – no need to apologise. I am horrified. It goes against the grain. I felt viscerally unwell, when I discovered what had been done to these flowers. And it broke my heart.

Is it yet another example of us losing our sensitivity and respect for nature?

Or am I in danger of wanting to dictate my own standards?

Is what happened about making ‘easy’ money?

Did they not have real blue hydrangeas in that day, and did not want to lose business?

Has it become an unquestioned norm and an assumption, that spray painted flowers are acceptable?

Even leaving my moral outrage aside, what has happened is probably against the trade description act: as good money was exchanged for real and not fake blue-coloured flowers. If not, then should we not get asked at the point of purchase, whether spray painted flowers are acceptable?

To me spray painting flowers or plants is a sacrilege. It pains me.

I am a peace-and-harmony-loving person. I need it to maintain my own physical and emotional equilibrium.

Whether the paint on these flowers was toxic or not, it feels like a social toxicity that had entered my home.

And we should be given a choice. Yes?

What did I do?

What could I do? I could not possibly throw the flowers away. They are the innocent ones and deserve better.

I am aware that some of you may laugh at and dismiss what followed next. If so, then I urge you to spend more time noticing and appreciating plants in nature.

For me, gone are the childhood and even more recent adulthood days, when I pick meadow flowers. Now, I leave them where they are and belong.

I felt I needed to nurse the flowers and thank them. Because they had been treated in a way, that was not meant to be. And I know what that is like.

I took them in their vase outside and placed them on the outside table.

They needed to be in nature, with plenty of air and natural light.

I do the same with cut flowers I buy for my therapy room. When the time comes to replace them, I take them home and place them outside my boat.

It is an act of gratitude and nursing, for they have provided some comfort and solace, witnessed sadness and tears, as well as human resilience and growth.

Standing outside in nature (day and night) always seems to give them an extra lease of life.

Eventually, when the time came, I would have wanted the hydrangeas to find a place on the compost. But due to the paint I could not do that. Sadly, they ended up in the garbage.

Because someone had treated them and us just like that – garbage. But we deserve better.

The moral of the tale?

Whether you are a nature-lover and / or want to make sure your (I assume) hard earned money gets the products and services you pay for, then try and remember next time you order flowers:

Check they are what you have ordered and have not been tampered with.

Karin Sieger is a UK-based psychotherapist and writer specialising in personal transitions, endings, making peace and the emotional impact of cancer, for which Karin has been treated herself. She does her writing on her orange houseboat in London. Karin posts regularly on her website KarinSieger.com. You can sign up for her Newsletter, follow her on YouTube, Twitter and Facebook or connect via LinkedIn.