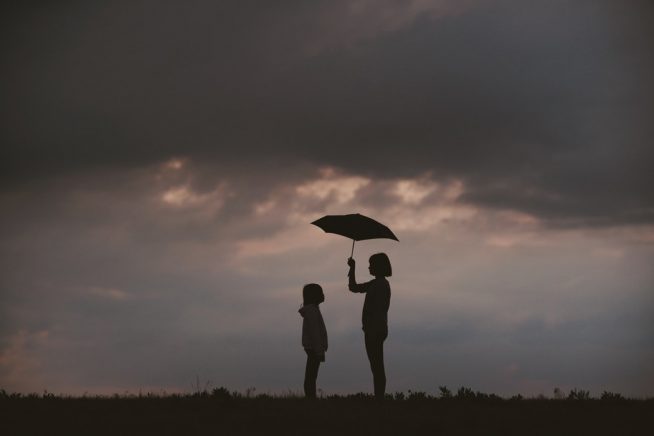 Part of teaching my kids empathy entails exposing them to the ugly, hopeless parts of life, and there’s no mama who wants to do that, but sometimes it meets us right in our path of an otherwise happy day.

We live in an apartment due to a recent divorce and not being able to afford our home on our own. We were once tucked away on a cul-de-sac far removed from having to interact with anyone (that fact alone makes me happy we’re not there anymore). Now we live on the third floor of an apartment building, coming in contact with people from all walks of life with all possibilities of obstacles, financial and otherwise.

The other day my kids and I were in the apartment together, and I asked my seven-year-old son to please come to the car to help me bring up the camping chairs we had used that weekend. On our way back up the stairs, we both walked past the apartment below us and stopped in our tracks at the yelling and swearing that was coming from the unit.

Now, don’t get me wrong, I am a yeller at times. I lose my temper and I say choice words to my kids when I reach my limit. No judgment from me on that. I get that parenting can drain the sanity from anyone.

What this mother was doing was not just a motherly scolding. She was screaming bloody murder, telling her kids to shut up over and over again as they cried, and she continually dropped the “f” bomb. I hear this on a weekly basis from that apartment, but this was the first time one of my children was hearing it. I realized my son and I were frozen, so I snapped out of it and hurried him along, slapping on a fake smile as my eyes filled with tears.

For a while we didn’t speak or even look at each other. We just cried and looked at the floor, the sounds of baseball bats cracking into baseballs across the street filling the air.

My 10-year-old daughter eventually came out to see what we were doing, and her eyes widened, wanting to know if we were okay.

We explained the yelling we heard, and how bad we felt for the little kids who live there. She asked me if they were the “annoying kids who say bad words” who were on the playground last week. I told her yes, it’s those kids, and yes, they’re probably annoying because they might not be getting tons of love at home.

I told her with honesty, “Man, it’s really hard to love people who are acting horribly, right?” I encouraged her to extend kindness and love to them, knowing in my heart that it’s not easy to see past people’s poor behavior, knowing something must have happened to sour them. That’s a tough lesson for my 42-year-old brain to swallow, let alone serve it to my own kids.

We all talked and felt sincerely bad for the kids, and we openly admitted we all felt hopeless and confused about what to do. I offered that we pray for all of them, especially the mom who is overwhelmed and defeated.

Offering such a hands-off solution made me internally cringe at my own suggestion, I have to admit, but empathy doesn’t always come with a clear, tangible solution of how to assist.

Empathy is often an open-ended, unresolved, uneasiness that sets up camp in our guts, and a good parent’s job is to invite this beast in to our children’s hearts, so they can be their best adult selves one day. @JaggedJourney1 (Click to Tweet!)

My first instinct was to go to the apartment and offer help to the mom to ease her stress, but I chickened out. I didn’t want to embarrass her and make her anger worse. Then I thought of writing a note explaining “Hey, I get it. Being a single mom is stressful—let me help!” or bringing cookies to her kids, but I talked myself out of those ideas too because it’s such a personal territory that I am not supposed to be treading on with a neighbor, but then again, maybe an offering hand and heart is just what this woman needs?

I openly explained the dilemma to my kids because I want them to see not everything is easily fixed, but that doesn’t mean we give up.

I want them to know I don’t always have the answer for things and for them to see my struggles with knowing what the right thing to do is. We all agreed the best thing for now is to keep surrounding that family in love and warmth in hopes of it lifting them up in some small way that might one day lead to a bigger way.

Empathy is a heavy feeling of wanting to help but often being paralyzed to inaction because of the answers not coming easily. Watering it down to something less frustrating and debilitating would be a disservice to my children and the active-participant role I’d like them to play in this world.

I am always preaching to my kids to stop being so selfish and to start caring about other people. As they sat on that porch, eyebrows furrowed as they wrestled with the hopeless feelings they were shouldering, I saw the empathy light flicker on. It’s a light that will serve them well if they keep their eyes open and face the hard things in life instead of running in the other direction towards isolated comfort, which, if I’m honest, is where my instinct initially tells me to push them towards.

Empathy means being vulnerable to the fact that we don’t have the answers and it frustrates us to the point of tears.

It means we have to be full of grace when others don’t act the way we’d hope them to act.

It means we feel small in the face of all the problems that are bigger than us that we’re not equipped to conquer by ourselves, and pushing our egos aside to truly see others, flaws and all.

Just like any parent, I’d love to shield them from the pain and struggles in the world, but part of my job as a mother is to pull back the curtain, show them the suffering and nudge their hearts to help in small ways that lack glittery heroism.

My hope is that someone who sees us on our worst day might have the same combination of grace, vulnerability and empathy to do the same for us because we’ll need it as well.

How have you or your children stumbled upon empathy?

Rebecca Rine is a writer, freelance newspaper contributor, and public radio on-air contributor in Dayton, Ohio. She is the founder of JaggedJourney.com, a website with a tagline of “Face the Poo”, meaning life is most rewarding when we lean into the road ahead with optimism and vulnerability.