The Exhilarating Peace of Freediving 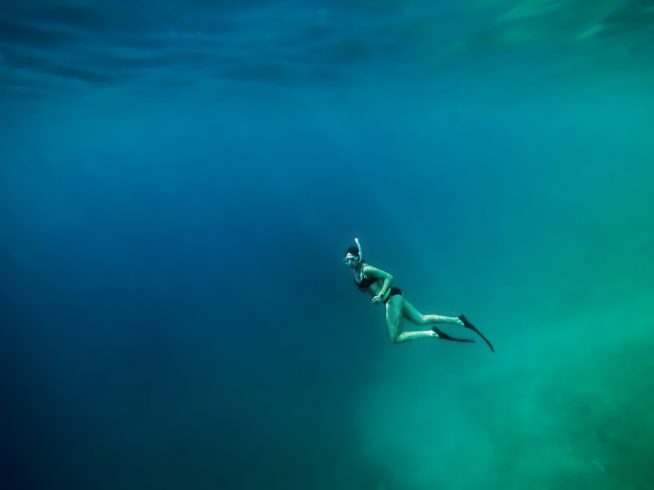 I’m one to think a lot at night. Probably why I don’t get enough sleep.

There’s just so much to think about. Even the most irrelevant things start to stress me out, like my future, my essay topic, what I am going do after high school, how I am going to live off of $4,000 a year. I only have three more years to figure my life out and I’m absolutely clueless about how I’m going to make it. The list goes on and on…

So you can only imagine how much sleep I lost when my parents shocked me with the news that we would be moving to Saudi Arabia. Of all places! It had to be the Middle East…

When I moved, I admit, I wasn’t happy about it.

My whole world had changed, and there was nothing I could do an about it, except complain.

My parents were excited about it. They were fascinated by the virtue and culture and statecraft of the region, but I was blind to see any goodness in it, except that we would be living right along the Red Sea.

I’ve always loved the ocean. The ocean covers 71 percent of Earth’s surface and contains 97 percent of the water found on Earth. That’s a pretty big deal.

In this huge mass of water, there are more than 2.2 million species, many of which are still unknown to humans. The ocean is an endlessly fascinating world.

One of the first weekends after moving to Saudi Arabia, I was bored, and my father took me to the beach along the Red Sea. The water was bluer than any other ocean I’d ever seen. The sand was so fine it was like dust.

On this particular day, we rented some snorkeling gear and snorkeled over the water.

This was my first time snorkeling and I loved it from the start, and so did my dad. From then on, we were able to go almost every weekend since it was only a 20-minute car drive away. We later learned how to scuba dive and eventually freediving became our thing.

Freediving, and even scuba diving, requires a lot of mental effort as well as physical challenges. I must conserve air between the first breath I take when I reach the surface until the last for decent while undergoing an amazing series of physical changes to survive the depths. I feel my lungs shrinking and the pressure in my ears increasing.

But what I love most about the ocean is not freediving. It’s how my stress gets taken away by the tide.

Standing at the shore’s edge of the Red Sea, I’m at every moment overtaken by the sensations of peace and happiness.

My breath is heavy, my skin and hair saturated in salt. I feel as if I am at one with the world and at peace with myself and all that is occurring… chaos included.

The world can be so loud sometimes that my head feels like a never-ending roller coaster of thoughts. It feels like someone locked me in a room surrounded with TV sets on maximum volume with no way to silence them.

I often need ways to shut it out. The ocean has always been my remedy for relieving tension, stress, and anxiety.

As soon as I begin to descend, my worries are lost.

My ears block out and everything suddenly goes quiet, as if the silence is listening.

And as I get deeper, the water gets colder, my heart slows down every depth I reach, and I’m distracted by the deep perplexing blueness enclosing on me.

Going further down, the waters become crowded with vivid fish and corals and succulents.

We all have our problems; we are all just trying to figure this out.

But life isn’t a sprint. It’s a long race and you’re not in it just to “win”.

I found a healthy way to escape by doing something I love in what felt like, for me, was the end of the world.

I realized that despite all the frustration, when you’re with the people you love and doing what you love, that’s all that matters. We don’t realize how important something is until it’s gone. We only stress about it so much that we miss all the good parts. Look for the good things.

Life is a beautiful gift so just enjoy every second of it.

It will change your life…for the better.

Daniela O’Connor is 14-year-old. Born in New York City, she is currently in 9th grade and boarding at Fryeburg Academy in Maine. Daughter of a US diplomat and a Brazilian mother, she experienced living in Brazil and KSA. She loves art, swimming, and diving.