Hand in Paw, Shoulder to Tail: Grieving for a Furry Friend for the First Time 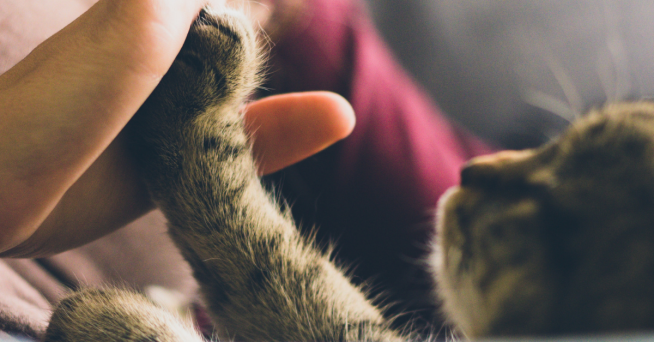 There is an overwhelming feeling of loneliness that accompanies the initial shock of losing your beloved pet companion. The path of grief gives loneliness an entirely new meaning. There are some experiences one must endure alone, and grief is among them, further exacerbating the pain. You long for the bond that you once shared with your pet, one which cannot be replaced by any other.

When I was 17, I met who was to become my miniature companion. He would remain at my side for the next 20 years. Scooter was a shorthaired black, male, tuxedo cat, given to me by my father and brother who noticed him following them around on a farm in upstate New York. I couldn’t settle on a name at first, so I cycled through a few before one stuck. Scooter is the name of the lead singer of a rock band and for some reason, he quickly took to the name. It was almost as if he chose his name as he had chosen me.

Scooter began to journey alongside me as I forged ahead through life’s milestones from every first to every last.

Hand in paw, shoulder to tail, by my side he remained as I studied and graduated from college, moved out of my adolescent home into my first apartment until current day. He was in my life when I met and married my first love. I echo the sentiments of Joel Barish in The Eternal Sunshine of the Spotless Mind in that I can’t remember anything without him.

Scooter was the umbilical cord from my youth which provided a sense of home away from home. We traveled to multiple cities and cross country from New York to California this year. Scooter witnessed my transition from that of a young girl to a woman.

My cat was my rabbit’s foot for every curve ball life threw my way.

Somehow his small presence provided me with a comfort I only now have begun to understand through one of life’s hardest lessons, which I’ve had to face this time without him.

After his passing, I rummaged through photo albums only to find sightings of my black mass of fur either huddled in a ball on my bed or just behind me in a corner. It was as if the world became one giant reminder of what I had lost.

The last day of your loved pet’s life can replay in your mind at first. You struggle in thinking what you could have done differently to somehow prevent the inevitable. Memories flash in your mind as if you have front row tickets to your movie screening except you are the only theatergoer.

I formed a smile that held together with the fragility of a poorly made shed of wooden sticks only to feel like a mannequin of my former self. A trip to the grocery store proved to be a challenge. I approached the register and avoided eye contact as one glance exchanged with kind eyes strikes the erratic urge to burst into tears and proclaim: “My cat died!” The deafening silence is louder than noise since he’s been gone.

My grief has become my never-ending story as time has proven more of its sporadic uncertainty than anything else. Finding my way out of grief is comparable to chasing the fireflies I ran after as a child, which were captured to watch the glow but only for a few brief seconds between folded hands, to hold the speck of light closer before it flickers away.

Just the same, this is what matters most, the beautiful moments with your pet that captivate and remain etched in memory.

Natasha Navarra is a Native New Yorker, writer, poet and newly published author residing in Southern California. She’s an avid pet lover and supporter of rescue organizations and animal-related causes. Her most recent work has been published in the Spring 2019 Issue of The Cat Magazine.