4 Differences between Bosses & Leaders (Which Are You?) 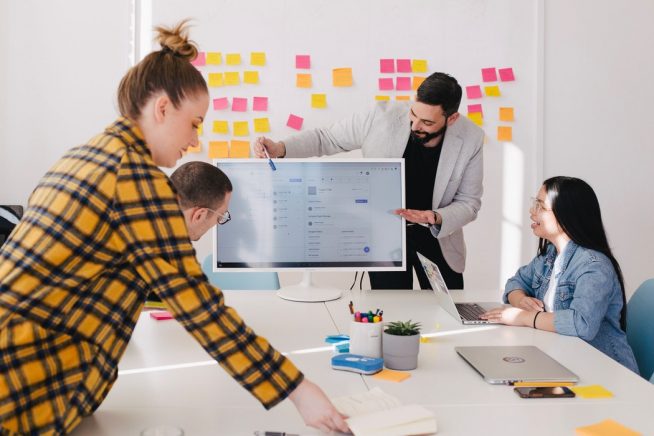 Consider this question: Are you a boss or are you a leader? Understanding the differences between bosses vs. leaders will help you become a better manager, business owner, teacher, trainer, coach, parent, even a better spouse.

To start off, when I say “boss,” I’m talking about the kind of manager whose leadership strategies are all about command and control.

Bosses want to be seen as the dominant force in the office and business and tend to “manage” their employees through intimidation and fear.

They have a very “top-down” way of doing things and think it’s more important to be in control of their team rather than to establish trust and inspiration.

Often, a boss’s management style is very rigid. There’s no nuance, no ability to see different sides of an issue.

The boss declares, “I’m in charge” and “I’ve decided this” and “I expect that” – without encouraging any input from their team. It’s the boss’s way or the highway.

Of course, big decisions need to be made all the time in business, and being decisive is necessary and important.

But when a boss insists on making all the decisions on his or her own, and never asks for ideas or feedback from the team, it makes employees feel undervalued, like they have no useful contributions to make. And that will make them feel discouraged and disconnected from the success of the organization.

Learning the four major differences between the two will make you an even more effective and respected leader.

Instead of making declarative statements of how things will be done, the leader asks for input and then provides a compelling vision that others are eager to get behind because they see their own ideas and input reflected in it. Leaders then give the team the tools, the confidence, and the support they need to do their best work.

As a result, they end up feeling more ownership and connection to the organization’s success.

2. They are Transparent and Open

Leaders are transparent and open. Bosses usually only tell employees things on a “need-to-know” basis. Information is power and bosses, often fueled by their own insecurities, will hoard and keep it to themselves.

They see information as currency, a commodity to be doled out to those who are worthy, and in return for other benefits.

It’s a short-sighted strategy and one that often breeds suspicion and distrust.

Transparency is a powerful leadership quality. That’s why leaders take a more open and honest approach to their management.

They understand that they don’t have all the answers. So they share what information they have and open it up for discussion because they know that sharing information and then seeking feedback and input from others invites new perspectives, new ways of thinking, and new solutions.

Leaders understand that people want to be valued. They want to know that their efforts, insights, and ideas are recognized and appreciated.

Leaders who practice open-book management (meaning that everyone has access to all the financial information- salaries, expenses, and profits) send a signal to their employees that they are an important member of the team, and that their contributions matter.

Not only that – they show that they’re open to and willing to consider multiple options and different approaches. What a powerful message to send!

Bosses tend to blame others when things go wrong. “It’s my staff who failed to get the job done, so it’s not my fault that it didn’t work out.”

On the flip side of that, bosses are also more likely to take credit for work that they didn’t do. “If it’s my staff that did the good work,” they rationalize, “then I deserve the credit for being in charge.”

The result of this kind of boss behavior is that it creates a culture of fear and uncertainty, in which employees know that the hammer will fall on them if the expected results are not produced. That’s no way to build loyalty, forge a positive work environment, or develop a team.

They take responsibility for everything that goes wrong and gives their team all the credit when things go right.

Leaders know that it’s their job to make sure the path is clear of obstacles so that the team can be successful. Leaders roll up their sleeves and get to work. They don’t just sit in an office, waiting for people to report to them. They make themselves available to solve problems, to offer support, or to jump in to help with the work.

4. Leaders Listen to Their Employees

Leaders listen to their employees and let them know that they’re being heard. Leaders care about the opinions and ideas of the people on their team. They encourage their team to express their thoughts without fear of criticism or judgment.

Not only that, leaders know that by listening actively to their team, they will be more likely to recognize patterns that emerge, address unspoken concerns that may exist, and provide the necessary clarity to help their team do their best work.

So, now that you know the difference between a boss and a leader, which one would you say you are? And what can you do to become an even more effective leader – in your office, your business, your profession, or even in your family?

Remember, the way you act and interact with others will determine whether you’re seen as a “boss” or a “leader.” @JackCanfield (Click to Tweet!)

I promise you that when you focus on being a true leader rather than an authoritarian boss, you will find it so much easier to earn respect and deliver better outcomes for your team and your organization.

Who are some of the leaders you have worked with, and what qualities did they have that made them such a great leader to work with? Take this free leadership quiz to uncover your inner leadership potential.

Image courtesy of You X Ventures.