The Courage to Look Inside at What Hurts 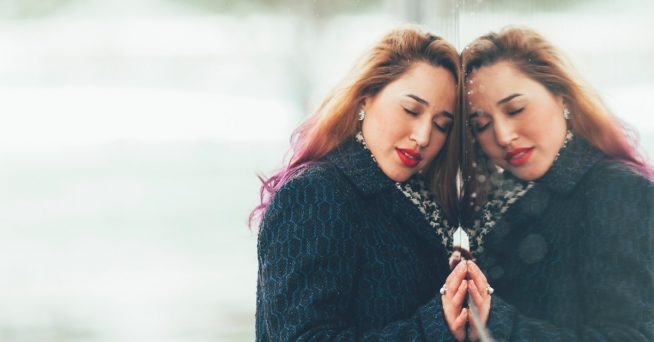 I used to think there was something bad and broken in me. Some damaged bits hidden deep down, out of my reach.

They spoke to me, whispering riddles and sending me on impossible quests. They mocked my failure when I came back empty-handed.

I thought I was their prisoner, and I plotted my escape. But how do you escape from a prison built inside you? How do you scale the wall that goes inward or run away from the words spoken in your own voice?

Then they must be haunting me, I thought, and I became consumed with casting them out. Years into this obsession, I looked in the mirror and found a hallow, shrunken figure standing in my place. A skeleton and a ghost myself.

These must be the secret truth of me, I decided. They must be locked away for the good of all. I held them in and covered them up with something more pleasing, all the while holding my breath and waiting for the moment I was found out. Surely anyone could see me for what I really was.

They must have been planted here by someone else, I said. And I busied myself with setting the rules that would ease the pain. I complained and blamed and still, they remained.

I might have thought they made me a monster were it not for the little exceptions.

I longed to bask in the glow of those other bits of me, so radiant and wonderful. I found them in the contrast of leaves on the sky. The first day of spring. A surge of music.

They felt so true and natural, but I was afraid to venture too far into their light. I couldn’t let myself trust in their expansiveness. Where are the demons, I’d wonder. Sleeping? Patrolling some other area?

I was certain of one thing, wherever they were, they’d catch me and pull me back.

It was in one of those moments of exception that I realized something:

It was then that I saw the truth of what running or hiding had accomplished. In fear, I believed they would bring me closer to the peace I sought. But they only held it perpetually out of my reach.

I decided to stop running.

The change happened gradually. In the broad daylight of these exceptions, I broke my own rules and inched closer. Closer. Closer.

I crept right up to the edge of where the light could reach and looked into the dark. I was afraid, but I was even more clear.

What I saw surprised me, but it didn’t scare me anymore.

Not demons, but dolls dressed up to appear larger and more threatening than they really were. They were the imaginary friends of a lost little girl.

“Who called you here?” I asked them.

Yes, I had been afraid, I remembered. I created these creatures to protect me, but once in place, they scared me too.

I watched their bodies relax as they nodded and let me pass. And I saw her look up at me with wild hair and round, frightened eyes.

All this time, I thought it was me with the impossible task, but it was them, the guardians and that little girl, asked over and over to treat with fear what could only be healed with courage.

It was when I found that courage in me to come closer and look that the real healing began. @ralph_leslie (Click to Tweet!)

I’m learning how to live again, as brave as I was that day. To notice when she’s called them back, and rise, courageous, to respond with love.

Leslie Ralph is a psychologist, writer, and artist who hopes to leave the world a little brighter than she found it.  Her people are creative, sensitive spirits who crave love and peace, inside and out. Leslie is the author of There, I Might Find Peace: Poetry and Prose, Mantras and Meditations for Peace, Love, and Strength. Download her free gift, a ritual for receiving, a daily ritual for bringing more love and light, clarity and confidence, meaning and connection to your life. You can follow Leslie on Facebook or Instagram.