Family Roles & How They Influence Your Relationships 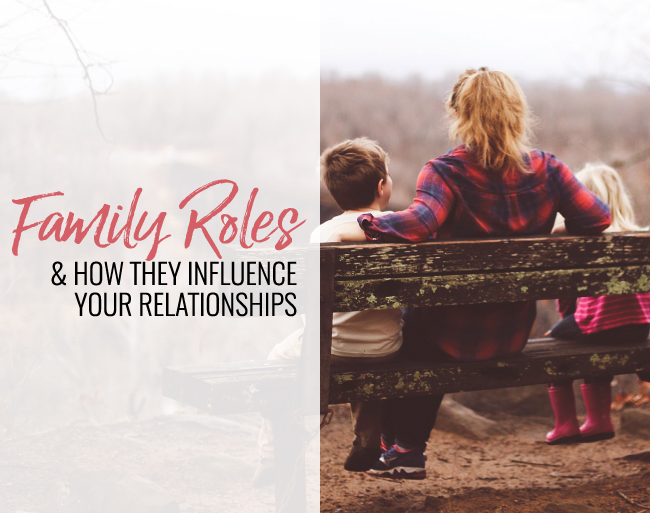 DO YOU KNOW WHAT ROLE YOU PLAY IN YOUR FAMILY?

All family systems have roles, and often times, they can be playing out unconsciously. The reason I want to shed some light on this for you is because so much of the time we grow up and we keep repeating the unhealthy behavioral patterns of our family of origin.

This is part two of my series on family systems, so if you missed last week’s episode, “What is a Dysfunctional Family?”, I recommend you watch the video on the eight most common dysfunctional traits and how to start to heal first.

This week, I’m diving into the six most common roles in a dysfunctional/addictive family system. Learning what your role was (or is), can really help you better understand yourself and empower you to make some positive changes in your life now…no matter what your family is like.

Last time, I asked you to imagine the family system like a living, breathing organism. It’s a system of separate, yet interdependent parts that make up a whole. In nature, the goal of a system is to be in homeostasis. Even in a dysfunctional system, there’s a balance to the dynamic, and it is achieved by everyone in the family playing their part or role.

The level of dysfunction within a family system impacts how stringently the roles are imposed and how compelled each member is to act out their assigned role.

There are six common family roles that were identified years ago by Sharon Wegscheider-Cruse in her book, Another Chance: Hope and Health for the Alcoholic Family. I can tell you as a psychotherapist for the last 22 years, these roles are extremely valid no matter the kind of dysfunction and I see them at play consistently in the work I do with the women in my practice, my courses, and groups.

Awareness of your specific role in your family system gives you the power to stop fulfilling that role. It was unconscious and adaptive at the time but now is not then. Many of us don’t realize we have a choice to put down those roles and to be self-determined in adulthood. Stopping the cycle and creating healthier relationships in your current life is your right.

The Addict or The Dependent

This is the person who’s acting out, whether that’s with their addiction or other dysfunctional behavior. They are self-loathing and struggling in their own isolation. A lot of the times they don’t talk about their issues or try to hide them. They might have an entirely separate life where they can be with others who share their addiction or behaviors.

This person is the center of an addictive system.

(In the video below, I share my personal experience growing up with my father who was a high-functioning alcoholic.)

The Enabler or The Caretaker

An important role that’s in every family system, the caretaker in a dysfunctional setting becomes the enabler. This person is making everything work for the Addict/Dependent. The Enabler is the queen (or the king) of denial. Their goal is to smooth everything over and just keep the ship running. They might convince themselves that the addictive behavior isn’t the problem and focus obsessively on everything else.

Often the Enabler is the spouse, but it can also be the oldest child.

This person is usually hardworking, overachieving, maybe even a perfectionist. Part of the function of the role is to bring respectability to the family through achievements. No matter how messed up or dysfunctional the system is, everyone can point to the hero child and say, “Yeah, but…so and so is amazing”. Can you see how that would then validate the entire family?

If this role is enacted for too long and continues into adulthood, the person might experience exhaustion, overgiving, the “disease to please”, resentment, the martyr complex or perfectionism.

This can also sometimes be referred to as “the acting out” child or family member. This person is the one who ends up getting blamed for everything whether they are to blame or not. Within the family dynamic, the Scapegoat is the one who is actually acting out the veiled frustration or hostility of the rest of the group.

Interesting to note is that the Scapegoat, because they are so used to being on the outside of the system, sometimes are the ones who actually end up breaking out of the role. They tend to be in the least amount of denial about what is going on, and often will seek out help once they break out of the system in adulthood.

This person is the family clown or the placater. The Mascot is someone who is trying to deflect the stress of the situation by supplying humor. They are the diffusers of the family.

Unfortunately, it’s quite common for the Mascot to end up having addiction issues themselves. There can be a lot of self-medicating within this role, thus, furthering the cycle of addiction.

Sometimes called “the invisible child”, this role is the family member is the adjuster. A lot of times this is the middle child. It’s characterized by being withdrawn, shy, not one to make any waves. Usually, the family thinks that this child is always “ok”, but in reality, someone in this role isn’t getting their needs met. There’s not a lot of attention put on them.

If someone fills the role of the invisible child within their family of origin system, they might grow up to put off making decisions, or have difficulty forming intimate relationships, because of the formative years spent hiding, but wanting.

I guarantee that if you came from a chaotic family system of any kind, you can identify with one of these roles, or parts of some of them. Keep in mind that these roles could be intergenerational. They are patterns that can be handed down from generations before us, just like addiction and dysfunction. There’s no blame here…remember the roles are unconsciously playing out.

I share in the video the ways to recognize and break out of these dysfunctional roles. I know because I did it. And so can you.

You have a choice. It takes raising your awareness in order to know and recognize the behaviors that are a result of the role you’ve been compelled to play in your family of origin. It is only when you become aware that you can then consciously make a choice to do something different. You don’t have to perpetuate these unhealthy roles.

Raising your awareness is the first step to transformation. I created a cheat sheet for you with some questions to guide you in identifying your role in your family system as well as some steps that you can take to break away from the dysfunctional “dance”. You can download it here now.

“We repeat what we do not repair.” – Christine Langley-Obaugh

I talk about this in more detail in my weekly video below (which you can also watch HERE).  I hope that you enjoyed this episode of the Terri Cole Show and if you did, please share it with your friends and family. If you’re a woman and you have not joined my free group on Facebook, The Real Love Revolution, get on in here! We’re having this conversation and many other conversations in that sacred group and would love for you to join us!

Thank you for listening, for watching, and for sharing and as always take care of you.