10 Steps to Avoid Giving Up 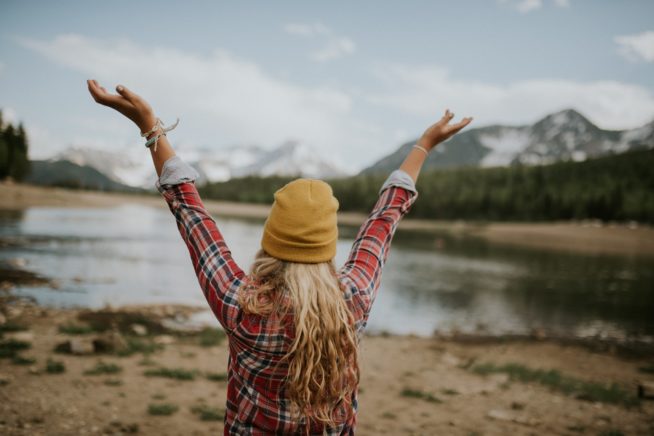 I want to disappear. I want to move into an old apartment building in a place where I would never talk to anyone.

I would order delivery for all three meals a day. I would learn to talk to my neighbors, who spoke every language but English.

I would learn their games and play them on the sidewalk and we would bet nickels and dimes and laugh and listen to the music coming out of an open car stereo from a car that no longer ran.

Sometimes, when I am feeling stuck and degraded, that’s how I feel. The sweetness of invisibility.

When I’m feeling stuck, I get sick. I want more out of life than what I have. I want a different job. I want to do what I love.

Then I’d get sick again.

That’s how it feels when I’m stuck. In a job. A career (maybe a career I spent ten years training for and 20 years doing). A relationship. An anything.

I wish I had more often told myself: the past is not the jail keeper of my future.

I think, “because I got a degree in X, I have to do Y.” Or because I’m living with A, this is it for life. Or because I wrote about J, then this is my life now.

I spoke with Matt Berry, and he was doing what I thought was a dream job, writing movies, but all he wanted to do was blog about fantasy sports for $100 a blog post.

Or maybe it was Jim Norton, who I grew up with, who was driving tractors and taking menial jobs when all he wanted to do was be a comedian. 20 years later he’s one of the most well-known comedians in the world.

Or Judy Blume, who was stuck with all of these stories in her head, but raising a family in a loveless marriage, not realizing she didn’t need permission to get those stories out into the world. Getting sicker and sicker.

Or maybe it’s you or me, desperately unhappy in a relationship or a job, knowing there is something else out there. That things have to change.

These are not 10 steps for you. Like a “10 Steps program.” These are the ten steps I finally learned to do for myself. To stop getting sick. To stop throwing up on dreams. To cure my stomach from daily pain.

I feel restless. I can’t get up. The only thing to do in this step is to notice it.

It’s like a whisper. Not from the “universe” but from your body. It physically won’t let you get out of bed.

It starts to eat at your insides. Your body will destroy you if you don’t reinvent. But you have to notice it first.

Most people feel this step at age 30 and never change and get slowly eaten alive.

They look for medicines but the medicines can’t be prescribed. They are so far over the counter you will die looking for them.

I notice. But I feel things are never going to change. I’m trapped. My parents/friends/lovers/bosses/ will never approve.

Or: I’ll go broke. Or it means I wasted an education. Or money… Or a mind. Or a love.

Start listing the things you love. What did you love as a child? What do you love doing now?

They are there. They are waiting for you. They were for me.

But the past is not the jail keeper.

He spent three years batting around ideas with his writing partner and high school friend David Levien before they finally wrote the movie “Rounders” and then “Ocean’s 13” and now the upcoming Showtime show “Billions” (watch trailer).

I still look for the clues every day. Every day is Reinvention Day.

If we don’t reinvent, we die.

Go to the bookstore and see what books take your breath away. What conversations do you stick with. What relationships in your life excite you and you wish could deepen.

People will start to look at you. They will say, “He is a trainwreck.”

They have said to me, “You are going to ruin your life.” Or, “You don’t have any idea what you are doing.”

That’s OK. They are not my jail keepers either. I am the jail keeper. I open up the prison every morning and turn the lights on.

I have failed at everything I have ever started. My first two or three attempts at business failed. 17 out of 20 businesses I’ve started have failed.

I’ve been divorced, and that was after a ton of failed relationships.

I failed at making a TV show. Or two. Or three.

I could go on and on but it’s boring.

If you love something, you know what the best in the world actually looks like.

I try to be the best in the world immediately but that’s me being an idiot again. I have to be miserable first and see how hard it is. How high I have to go.

It takes a long time.

So it becomes persistence then, that gets you over that hump.

5) BUT SHOULD YOU CONTINUE?

You might. Or you might not. I wrote four books in the early 90s. I failed. I stopped. I took a job at HBO instead and gave up.

Now I write whatever I want. But we’ll see. I’m writing something different now.

Something much more painful. Maybe one day I will be good. But I love trying to get better. I love being a trainwreck.

Don’t be jaded and give up. Don’t blame excuses. Don’t burn bridges.

Maybe you painted as a child. Come back, my honey.

I’m often upset in my relationships and in my writing and in my business stuff.

For me: being upset at myself is the beginning of how I challenge myself. Almost every day I push harder than I need to until it hurts.

Sometimes it hurts too much.

But I’ll always come back to the things I love.

In every area of my life I’ve had great mentors.

How do you get a mentor?

If you want one in person: give them ideas.

Don’t say, “how can I help you?” Because then that just gives them work. Why will they help you if you just gave them a homework assignment.

Tell them how you can make their lives better.

If you want virtual mentors (sometimes the best) read 200 books in your field of interest. Every 50 books is worth one mentor.

There are. A book about quantum mechanics is a book about painting butterflies. Everything is connected when you filter with what you love.

8) YOU BECOME YOUR OWN VOICE

The Beatles, Pink Floyd, the Rolling Stones, U2, the Wu-Tang Clan, sound like nothing that ever came before them.

They don’t sound 100% different. They took everything from the past, mimicked them for years, and then developed their own unique voice.

Many people (me) give up between mimicking and uniqueness. That’s the Mimicking Trap. Don’t fall for it.

Writing ten ideas a day about what you are interested in is one technique for having your own unique voice.

Non-stop failure is the secret to success.

I don’t mean failure p*rn (which I often engage in) – crying on the floor in despair.

Calling up the girl ten times and begging her to say “I love you” back. (Wait, did I just think that or did I write it?)

Only by failing, by understanding the failure and documenting it, by throwing it into the checkbox of “things to avoid” and “things that worked” can you succeed.

You WANT to fail as much as possible. And then pick the pieces up quickly and try again.

Even thoughts can fail. It’s important to label them also: “useful” / “not useful” as they happen.

It’s the speed of “trying again” that leads to success. Not the despair and anguish and narcissistic anxiety that it may never work again.

But one more element is most critical.

When I’m stuck, I reach out and there are friends to grab me. When I’m falling, they hold out their hand and pick me up.

This is god. A prayer disappears into the air. A request to a friend, saves you.

They don’t always know what is best for you. But they will comfort you and support you and you will be grateful for them and they for you.

Don’t gossip about them. Don’t try to teach them. Just be grateful for them. I think I owe my life today, even this past week, to my friends.

A reinvention might not be a radical change. You might not go from truck driver to pro basketball player.

You might just go from good person to better person.

From incompetent to competent.

From a good friend to a great friend.

From being a slave to being free.

From letting others choose when you should be happy, to figuring out how to choose yourself for happiness.

Every day all of the above. It’s a practice.

You might one day be an astronaut, and the next, a painter. That’s OK. It’s your sliver of life between two giant infinities. Fill that sliver with cake and gold.