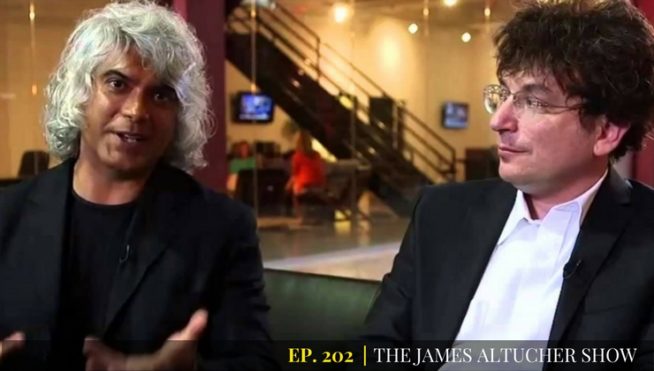 Kamal and I have been friends for over 10 years now. It’s one of the greatest things about the internet for me.

No matter what the criticisms, the internet has given me a family, close friends, great business partners. And, with Kamal, all of the above.

But he was gone. I couldn’t get ahold of him. I called Brandon. “Have you seen him?” Nothing.

I called Steve. Nothing.

I sent a bunch of messages. I didn’t know how to find him.

This happened once before.

In 2011, I was meeting Kamal Ravikant for the first time. I was in San Francisco.

I went to a party his brother, Naval, was holding. Kamal was supposed to be there.

At 4 in the afternoon? Naval shrugged. Kamal never showed up.

Two days later we met at my hotel right before I was going to the airport. “I’m so glad to meet,” he said and he was smiling. We spoke for awhile and then I left.

A few weeks later he told me he had been sick. “I was so sick, most days I couldn’t move.”

“What happened? How did you get better?”

He said, “I’ll tell you but it might not sound real. One day I could barely move. I was sick. I thought this is it. There’s noting to live for. I could barely get out of bed. But I crawled up to the mirror in my bathroom and I said to myself, ‘I love you.’

“How important it was to mean it. How I had to rewire my brain to love myself.

“And every day I got better. And better. And then even better than I was before I started this. I made a complete recovery.

I started to think selfishly. Kamal doesn’t seem to remember this part. “Can I write this down in a blog post?”

So he did. Later, he credited me for helping him come up with the idea of writing a book.

And I always tell him, “You did it! I wanted to just interview you.” But he doesn’t believe me. He says, “I never would have done this without you.”

Man, I had him fooled.

But he wrote the book. “Love Yourself Like Your Life Depends on It.”

And you can rewire your brain by constantly practicing, like you would exercise any muscle, to love yourself.

He wrote the book. He self-published it on Amazon. About a year before I wrote “Choose Yourself”.

“Love Yourself” was 8,000 words, about 1/8 the size of a book you would find in a bookstore. That’s the great thing about self-publishing. There are no rules. No word limits.

As of today, it’s brand new.

Here’s what happens when you self-publish a book that starts to have a lot of sales. Other publishers call and ask to publish the book.

“But,” one publisher told me who wanted to republish “Choose Yourself,” “you have to unpublish your version of the book and then a year later we’ll publish your book.”

“But why should I do that?” I said. “That doesn’t make sense. Let people buy the book so demand keeps building from word of mouth.”

Some people have a scarcity complex.

These publishers would think: If someone buys it now, then who will buy it later? But good books keep getting bought.

“Love Yourself” by Kamal, was that type of book. He was getting the offers from publishers but he kept saying no.

Until he went missing again.

Until something happened to him that would throw him off balance.

And the practices that worked for you before might begin to fail you. Maybe you have to learn new ways of doing things. Maybe you just have to get back to the basics and relearn how to do what worked.

So the next time a mainstream publisher approached him he said OK. He had something new to write about.

He took “Love Yourself Like You Life Depends on It” and wrote his new story. Wrote about the disease that inflicts all of us.

He had to re-find his practice. The practice that had worked for of all these years. If you don’t exercise a muscle, it goes away quickly. He had to find the practice that created the book, “Love Yourself.”

So he did it. And did it. And survived. And kept doing it. And he rewrote completely “Love Yourself Like Your Life Depends on It.”

He had always been worried that publishers wanted him to add fluff. But this time he had something to say. He added 50,000 words of his experiences over the prior years since the book originally came out.

He had been depressed, even suicidal. And he had to rebuild from scratch his practice. Because it’s so important that we never give up the practice that saves us and gives us life each day.

When Kamal’s first book came out many years ago, I wrote a post about it on the very day it came out. The first line was, “Kamal was missing.”

Now, having learned so many things over the years from my friend, having read this book and saw all the changes and saw how he dealt with his own ups and downs and transformed it into a new life for himself and how it’s content evolved into something so much better but still the same but so much much better and new, I get to write another post on the same day “Love Yourself Like Your Life Depends on It” comes out.

Today. “Love Yourself Like Your Depends on It,” comes out and. It’s great. It’s new. Fresh.

Kamal was missing. And then he was found.