How Trains Keep Me on Track 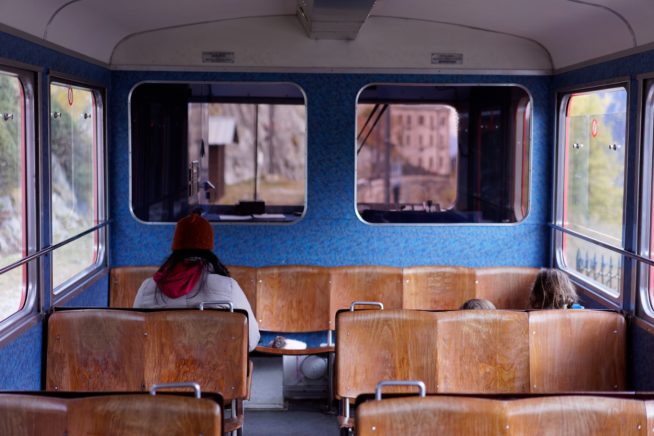 The long corridors, the slightly turbulent buggies and the magic of going somewhere while I sit back and relax. I can simply listen to music and watch the world pass by. I can stick my nose in a book and be miles away in a fictional world before I even realize I’m literally miles away.

It’s what I miss the most every time I come home. (Right after the incredibly cheap airfare available across Europe).

I’m a bit stranded without trains

I can borrow my mom’s car while she’s at work, but I hate that. Then I have to drop her off at school (she’s a teacher) and pick her up. It’s a strange feeling.

It’s like I’m her mom dropping her off at school while also reverting back into that adolescent dependency. Some weird state between a child and parent. It’s uncomfortable.

It might be important to mention I’m from the Southern States. The land of wide spaces and big trucks. If you don’t have a vehicle you basically have nothing. To explain to people how I manage to live without a vehicle is nearly impossible. Everyone thinks I’m nuts.

People are attached to their cars. My brother even prefers to nap in his truck sometimes. For him, that’s closer to home than most things. He feels safe.

Through the Tuscan hills by rail

My first time far away from home for a long time was during a semester of study abroad in Italy. Without a car, getting around was an obstacle.

To set the scene, I was living in a small town that was deep in the Tuscan hills. We lived in an old convent converted into dorms just a few steps from a stony medieval tower at the top of an ancient hill-town.

For miles, you could only see hills, other castle towers and waves of olive trees and vineyards winding and twisting away far beyond our view.

So for me, trains were essential. They were a part of the experience and adventure. They were opportunities to go to places.

Speeding, bumping, clacking, winding, and rickety. I had been warned they are disgusting and I should pack my own toilet paper and hand sanitizer.

From our isolated position, we only had a few options to escape. These rail wagons were by far the most reasonable. We could hop on one and be in Florence in an hour, meander over to other Tuscan hill towns or even cross borders into different countries.

And yes, maybe the train cars aren’t all spotless and shiny, but germs are mostly harmless. In fact, they might actually be good for us.

The rule of steel

The directors of our study abroad program held our hands through our first few train station encounters.

But they forgot an essential rule: get out and rough it alone.

I’ve even learned to manage my time better and accept when plans don’t go quite as expected.

You see, on trains, even when I’m lost I’m still grounded.

In realizing, “shouldn’t the water be on the other side” as I was leaving Rome for the first time or in looking up to a Polish controller attempting to convey through the language barrier that I was going the wrong way, I had to accept that it was out of my control.

It’s a hard thing to do the first time, but trains are going. And they are moving fast. They don’t stop when you realize you’re going the wrong way, they continue on to their destination. We are just along for the ride, bound to the journey.

So when something doesn’t go quite right, it’s better to accept the change and move forward instead of focusing on what you should have done. Instead of wasting energy, lean into the fact that you’re already going in a new direction. Accepting it is easier than focusing on the could have and should have and would have.

After all, it’s in difficulties and hard places that we grow.

Stick to the tracks

Maybe I’ve idealized the journey of train travel from reading about the Hogwarts Express over and over again or making an easy jump over to a literary metaphor, but really.

Those trains secure on their tracks take me somewhere both figuratively and literally.

I feel safe on the trains. Bound to a track, while my normal life habitually seems untethered and left to the wind.

That solidity in steel and wood is reassuring. Unsurprisingly there are considerably fewer train accidents than car accidents.

Additionally, the tracks run through towns linking them together. Spiderwebbing throughout a country or across borders to glue them together. From my numerous train rides, I’ve observed different cultural norms, heard incredible stories and found unexpected kindness.

Stepping across the threshold

Train stations are doorways. For me, they symbolize a change in the way I lived my own life. At the time it was first new and then not only normal but essential. And that first small-town station wasn’t even a beautiful one, it was just a plain Jane building.

These stations, however, have served as doorways for quite some time. A sort of home to commuters and a way station for the traveler.

In Florence and Rome, the train stations are much bigger. Chaotic and vast, it’s a bit of a trick to manage for first-timers. Then there are those that have withstood the test of time. Stones and steel stacked together as colonial monuments. And of course, there are modern sleek constructs with the latest technology.

Each one, simple or sprawling, is a point of entry inviting you to accept your journey. Are you ready to begin yours?

Kristen Klepac is a world traveler who has climbed mountains in Poland, explored the ruins of Pompeii and is currently on her way to settling down in and uncovering the wonders of France. Between diving into a good read, her love of music and learning French, she works as a freelance writer with Reservations.com specializing in travel writing and sharing her passion for travel, personal growth and wanderlust.