The Past Always Comes Back 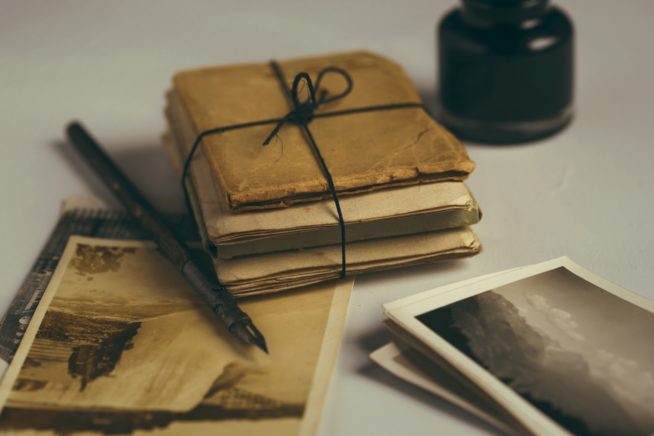 I was visiting my daughter in California to see her and my new grandson for a few days when I got a rude awakening. My past was coming to pay me a rude, unexpected visit in the form of ex-husband choices and life choices. Your karma can be so heavy it knocks you down. I will explain.

First I traveled across the country and arrived late, 1:30 PM east coast time. After a few hurried hours of sleep, I reacquainted with my somewhat estranged daughter and her new husband. I also met my new grandson, Jacob. He was not yet one month old and just the musty, fresh smell of his soft head was enough to melt me. I held him for the first time with care, and the warm memory of holding my daughter at this age made me feel nostalgic.

The first day was pleasant enough; patty cake, bottles and saying all the right things. My tired daughter tried to manage the same. The next day, I got up early and looked for a hair dryer in the cabinet close to the baby’s room. Instead I found a large white notebook with my name in capital lettering on the spine. I took it down and couldn’t imagine what this was all about. I was soon to find out.

As I scanned through the private letters and old documents, I realized this was a psychological report on my mental health prepared by my ex-husband of over 33 years. He had left us when my daughter was two weeks old. At the age of 23, they had reconnected but I knew little of the details. Most of the letters were from my daughter when she was in various stages of youth; usually asking for money she never received. Other letters were just her trying to reach out. All the letters were private, or so I thought. I didn’t read any of them closely. I couldn’t.

Then there was the psychological report. My ex-husband is a former third rate pilot who has been lucky enough not to work for a living most of his life. He was a trust fund baby who had kept his money to himself.  The pronouncement was “Borderline Personality Disorder,” the details of the condition highlighted in yellow marker like a high schooler would do in a biology textbook. I felt the room closing around me and slammed the thick notebook shut.

I was angry and stopped to consider. My daughter’s father had been a part of my daughter’s life for maybe one week of her first 23 years. Since they had reconnected, he had paid for European vacations and bought her a car. Had he been making up for the gross dereliction of the past when we had not heard from him for years at a time? I couldn’t know.

I tried to calm down, but finally reacted on gut instinct. I confronted her. I entered the baby sanctuary and asked her what the notebook was doing in her home (I didn’t ask why it existed in the first place). She clammed up, went cold and said she would talk to me later in the living room.

An hour later all three of us gathered around the living room of the apartment. I had already made alternate plans to join my husband in Mexico where he traveling and I told my daughter this. She was aghast. She stated she wanted me to stay but I felt uneasy and tense. They were both looking at me like this was my fault.

Then the strangest thing happened. I decided to stop, let it go and stay. My better nature prevailed. I became very still and saw through my daughter and the situation. My daughter was not trying to hurt me directly; she had just been clumsy in her behavior. My compassion for her stopped my knee jerk reaction to be defensive.

I realized I had no control over this situation and that there was a family drama here I didn’t want to be part of. No, I would never forget that the notebook existed, but this was her home, not mine. She had been evasive when I had asked her to remove it from her home so I had said my piece. I had no control of that either. I surrendered into a calm in the midst of chaos. It felt good.

I also realized that some of this was my past, all the mistakes I had made long ago, all the bad choices I had stumbled into and I had to face them head on. While I wasn’t the woman in the notebook, I was not free of my own foibles either. In my calm centered place I knew the “notebook” wasn’t a true representation of the past I had shared with my daughter or even close, it was someone else’s history, mangled and torn. The way my past is, the way all pasts are.

And I would just have to live with it.

Clover Mahoney has been writing for over 30 years, both fiction, non-fiction and poetry. She has had several publications first for poetry in journals such as The Southern Poetry Review and The Alabama Literary Review. She has also had non-fiction articles published in popular blogs. Clover is from the midwest, and has moved a lot, but now lives in NC where she teaches college English and writes. She is married and has a rescue mutt named Zoe.