Prejudices Oppress You – Stand up Against Them 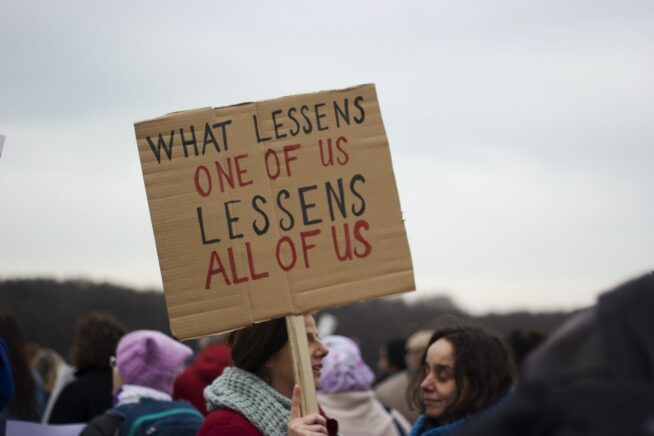 “We all have a tendency to think that the world must conform to our prejudices. The opposite view involves some effort of thought, and most people would die sooner than think — in fact they do so.” – Bertrand Russell

We all want to be fair, to judge every person impartially, and to live in a just, equal, heavenly world. Yet, we all feel scared when we find ourselves in a dark alley alone with one of the people we learned to fear. If you’re a woman, for example, that group can generally be men. Though you know most of them aren’t dangerous, in the darkness you recall every self-defense move you ever encountered, just in case.

We can’t help being prejudiced. Not only because our brain is structured that way in order to protect us, but also because it’s the easiest course of action. Even when there’s no danger to be found, we humans always prefer the easier way. It’s much harder to judge a person by learning to know him than by spotting a criterion that associates him with a group. That’s why grouping is so popular.

Focusing on one criterion and ignoring the whole picture is comfortable, no arguing about that.

But it’s not real.

Moreover, the price is hideous, as we all know just too well.

How We Undeliberately Victimize Ourselves

While everyone has stereotypes, inevitably everyone is also grouped into some collective with mortifying labels: “Women are emotional and can’t comprehend technology,” “Men are emotionless and can’t comprehend people,” “Left-wingers don’t care about their country,” “Right-wingers don’t care about their people.” And these are the more benevolent descriptions.

Every one of us knows how painful it is to be judged and treated unfairly, according to imaginary stereotypes of a group you’re supposed to belong to. How frustrating and humiliating it is when the individual you really are is invisible to people. You feel like you’re wearing the Emperor’s New Clothes, as everyone seems to see you and judge you due to clothes that don’t really exist.

Every woman, for example, underwent the sucking experience of not being taken seriously because of being a woman. Every man nowadays underwent the feeling that he’s regarded as a threat, and has to make an effort to prove he’s not like that.

The Problem With Stereotypes

Everyone found themselves misjudged because of prejudice, since stereotypes and prejudices are unreal. They never portray anyone correctly.

If you look at groups around you, grandmothers, for instance, or bosses, or reality fans. Which group’s stereotypes accurately describe the people it groups?

If you look at yourself and at your friends, who is described realistically by stereotypes?

However, it’s quite difficult to convince people that we’re not what they expect us to be.

Our imaginary pictures can be shattered when we get to know a person and see they’re not compatible with the stereotype. However, many people protect their made-up pictures by avoiding encounters with real people who can refute them.

We don’t behave so idiotically, obviously, but other people definitely do.

That way, these prejudiced people can always be right.

Or be wrong and feel right, which is almost as satisfying.

Who Deliberately Victimizes Us

Lamentably, the preservation of stereotypes is not always unintentional. Prejudices keep running around also because too many people use them, disadvantageously, in their pursuit of power.

Degrading others, for a start, is a very popular way to gain self-esteem. It’s not an effective way, essentially, because being cruel doesn’t make us proud of ourselves at the end of the day. Yet, bullies tend to ignore even their own emotions, and do what seemingly makes them look stronger.

Like other bullies, politicians all over the world use loathing to divide and rule. They aggravate stereotypes to create fear and hatred. Conveniently, hate and fear are such intense feelings that they tend to overcome other issues, and obtain these politicians support.

Even more conveniently, fear transfers the control to our primitive brain, that doesn’t bother to consider, so these politicians get power even when they have considerable faults.

Most of us don’t bully others, but feel safe and privileged seeing discriminated people oppressed. Compliance damages us both emotionally and practically, but then again, it’s the easiest course of action.

But hate and fear hurt us all, the haters and the hated alike. These harsh feelings put us into an emotional hell.

Moreover, hate prevents us from focusing on what really matters to us all, like saving our planet, or raising our children in peace.

So maybe we better make the effort of seeing people as they really are.

How To Free Ourselves

Deep down, we know that all of these superficial dividing criteria don’t matter anyway. As Anne Frank wrote,

“We all live with the objective of being happy; our lives are all different and yet the same.”

So we better remember that what all of us fundamentally want is happiness for ourselves and for our children. We all have the same goal.

We better remember that in reality, we’re all alike. Each of us is different, and all of us are the same, all of us are human, and no shallow dividing criterion can change that.

We better remember that our dividing prejudices are nothing but harmful lies.

Remembering it will free us from the restrictive stereotypes we have about others.

Furthermore, it will free us from the restrictive stereotypes we have about ourselves.

Our awareness, therefore, can progressively free our families, our societies, and eventually free the entire world.

Refuting one prejudice at a time.

Welcoming one person at a time.

Estee Horn comes from a long line of not-so-warty healing women. She uses their word-craft, as well as her MA in Eco-Psychology, to help people simplify life and be happier. Get her free life-changing checklist of 15 Habits That Guarantee You’re On The Road To Happiness.