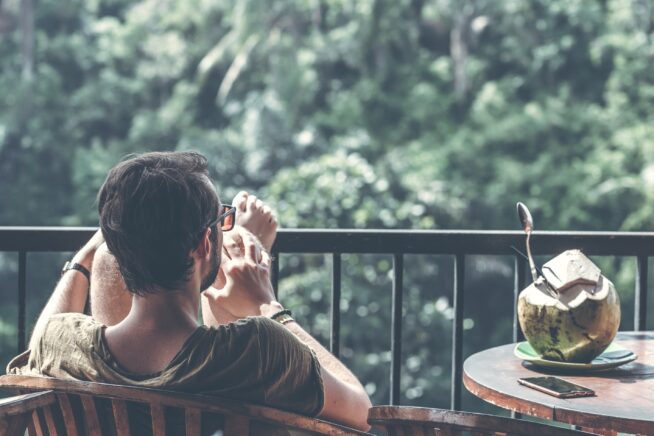 After a terrible accident, my life changed suddenly as only lives can. One moment, I was in Canada amidst a circle of loving friends and then the next, I was on the plane back to Mauritius to be with family and heal for an undetermined length of time. Soon after I landed, the Pandemic struck and the entire country was placed on lockdown.

They say “When it rains it pours,” or ‘never two without three,’ and whether one likes using adages or not, there was truth in this for me, I reflected glumly. First an accident that almost ended me. Then leaving my world behind for the relative unknown of being back in an existence in Mauritius I had left behind long ago as a teenager headed for Montreal and now nothing less than a global pandemic which forced an injured version of me and a million other people to stay in the confines of their homes.

I think it is an understatement to say that over the next few weeks, I felt morose decidedly more often than I would have wanted to be feeling.

A place to call my own

I sought solace on the balcony of my home, solace from my mind trying to relentlessly make sense of a world I no longer recognised, solace from the storm within and ironically given that I was outside, solace from the tempest without, afflicting the world. This balcony became my refuge for many hours every day.

There, on what has been nicknamed by many ‘one of the loveliest places on earth’, overlooking verdant, landscapes of tropical vegetation and rainforests empty of people who were all indoors, I began a journey of discovery, both within and without. Like most wonderful things, I found more than what I was expecting as I was not expecting it: in this case I found peace.

Peace came to me not in one big epiphany but rather in a less dramatic but surer, more solid way: bit by bit, lesson by lesson, the sum of the parts eventually becoming greater than the whole in a wonderful way.

I have always been gregarious and extroverted which was why the confinement was harsh for me. Yet, on that balcony, looking at mainly nature and as I said, one devoid of people who were all confined to their houses, I learnt to appreciate that important distinction between “Loneliness” and “Aloneness”: the former is destruction while the latter is creation, or creativity to be more exact.

In my aloneness and in the relative silence, I learnt to enjoy my own company, I started to write more, meditate more and I began to feel calmer, more resilient.

2. Present moment and all

Through losing myself in the sights and feelings while I gazed upon the world, I inadvertently trained myself in appreciating the present moment. Second by second, minute by minute, day by day, I learnt to appreciate life without thinking much of an uncertain tomorrow. Consequently, I grew less afraid of the Pandemic and more focused on living a good today.

After a hectic life abroad, I learnt to take pleasure in the small things and thus I began to enjoy life more largely: I gasped at and photographed a family of partridges, I gazed in childlike wonder at how the sun looked through the palm trees and I was enchanted by how sunset managed to look different every evening.

4. How interconnected we are

As I looked upon the world, as I saw the clouds above, saw the trees sway in the wind, marveled at a multitude of coloured birds flying and making up a perfectly shifting rainbow against a very blue ceiling, as I saw giant bats fly beneath the full moon, I started to sense how we really all are one.

The clouds are water vapour which we all contribute to or use, the trees and other lifeforms share the same oxygen and carbon dioxide brought by the wind and we are all made of each other, of the same matter which at some point will return to the world to build more creation.

I understood even more then why we all needed to preserve the world because preserving our planet really was about preserving us. The greater the planet, the greater the us and vice-versa. I resolved to keep this lesson in mind and do my part to help ensure that this pandemic caused by disrespecting everything that is, never happen again.

The sounds of nature, the sunshine caressing my face and what I fancied to be the trees smiling at me while they danced in tango with the wind all mended me both in spirit and in body. After what happened in Canada, I felt diminished in more ways than one but those days on the balcony in the worst of times, brought me closer to a vision of whom I could be and not just whom I could be once again but whom I could become. Hence, I promised myself to spend more time outdoors once all this was over.

I noticed how animals all came out during the lockdown. I saw birds I had never seen before flitting about, mongooses roamed both land and trees (who knew they could climb trees and that they were so cute) and all manner of things looked like they were celebrating.

Celebrating what I asked myself? The answer was painful but yet it held in it a promise: we humans could do better, be not a plague but a boon to our other animal brethren. At least, this is what I hoped for and resolved to support in the future.

7. We need each other

When the lockdown was lifted and people came out again, looking from up above, I was struck at how everyone celebrated each other’s company, friends and strangers alike. People cheerfully greeted anyone they met on their path, chatted (at a safe distance or not) and breathed in the collective energy of everyone.

I hoped then that people would remember how it felt to be away from others and to henceforth value humanity more because we do need others, we do need that ‘hello’, that smile even from quarters unknown.

Leaving Canada was one of the hardest things I had to do, an impossible choice I called it then. Prior to that, I always thought a new beginning deserved to be called that only if it was the renewal we wanted, we had designed. My stay in Mauritius thus did not seem cause for celebration as it was not what I had ever envisaged.

After finding the peace and resilience I needed on that balcony, I understood that there is another just as worthy type of new beginning, one that is perhaps not the one we wanted but the one we needed, the one I got. Moving forward, I intend to honour this new chapter by making the most of it, balconies and all.

Kevin Chitamun created “PicturePositive“, a global Facebook group dedicated to capturing moments of positivity in photography and sharing them so as to help people who may need hope and to show them that life is worth it. Kevin learnt through life experiences and through PicturePositive that kindness and positivity can change the world and now he tries to spread them everywhere he goes.