The Steps before the First Step 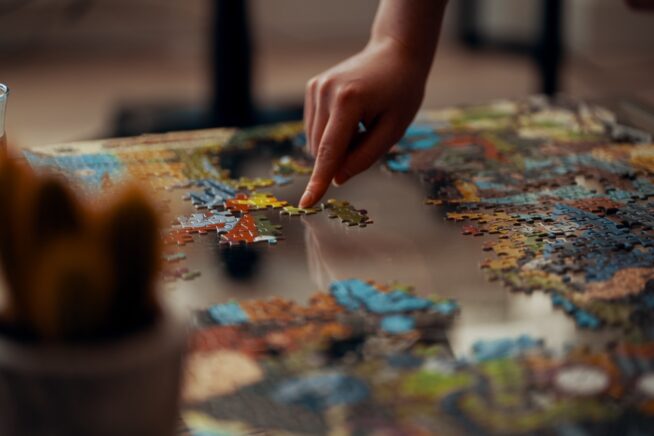 If you try to tackle a big project and end up getting stuck somewhere along the way, it might mean that some steps are missing.

Imagine trying to complete a difficult, 1,000-piece jigsaw puzzle. Even though it has a thousand pieces, finishing the puzzle requires to complete more than a thousand steps.

You need to spend time sorting, grouping, and looking for edge pieces. You also might have to undo some parts of your work as you go along—which adds more steps, since now you need to override previous tasks that you thought had been completed.

This is all logical enough, but a) it takes time, and b) if you haven’t ever done a large puzzle before, you might get frustrated. You might give up along the way, leaving your puzzle half-finished and sitting on the kitchen table for weeks. Finally, you push the pieces back into the box, swearing off puzzles until the next family holiday gathering or global pandemic.

Maybe the root cause of puzzle neglect could be traced to the beginning: you underestimated the number of steps, as well as the amount of effort that would be required to persevere beyond the easy ones.

Two weeks ago, I asked a question in my newsletter: “Why haven’t you started?”

My theory was that a lot of people (maybe even most of us) have something that we really want to do, but we struggle with making any real progress. The more I investigate this question, the more I believe that the answer is twofold.

First, we struggle in getting started because we don’t really know what the first steps are. Often there are prerequisites, steps you have to complete before the “official” first steps, which effectively means that your list of steps is incomplete. There’s an obvious solution to problem one: we need better lists of steps.

But that’s not all! The other reason we struggle has to do with self-doubt or some other internal obstacle.

In response to my question, a lot of readers said something like this:

In these situations, having a better list of steps doesn’t fully solve the problem—or perhaps we could say that step one is “learn to believe in yourself.” This will require some more investigation, so I’ll let you know what I come up with.

Until then, know your steps, and have confidence in yourself. Puzzles are hard for a reason!

P.S. One more thing: in jigsaw puzzles, as well as many other challenging endeavors, some steps are harder than others. Some sections may actually be easy, and even in a hard puzzle, putting in the last few pieces is going to be a lot easier than the ones in the middle.