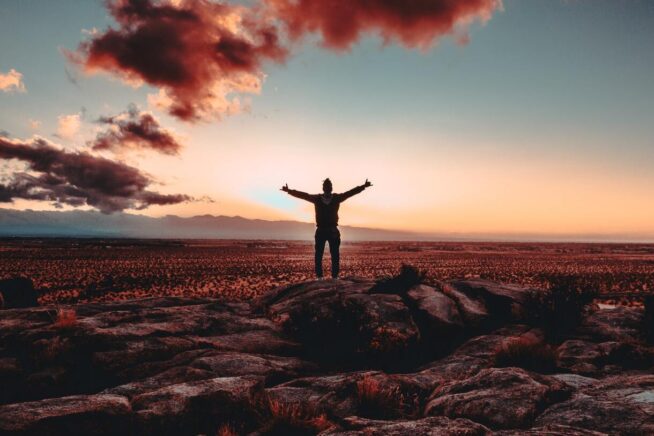 What’s the real secret to personal growth into living your best life? Is it a matter of chance or something more?

Few people seek out difficulties and challenges when they want to grow. Do you?

I don’t, to be honest. Yet I’ve found that it’s in the intensity and difficulty that trials bring where the best results happen.

We’re forged in the fire

Gold that has the highest monetary value is mined from the earth. Yet when it is brought to the surface, it’s not worth as much as it could be. Gold has to go through a powerful and intense refining fire to reach its maximum value.

The same is true for you and I and everyone else.

Whether we look at people in our modern era of success or we travel through history, we see so many variations of the same story. It’s true when we look through fiction and film as well.

See what these characters have in common:

It’s more than what you think. Each of these individuals spent serious time in a figurative desert. Some spent time in a literal one too. The point is, they had to do some deep soul searching to make a commitment to themselves that was unshakeable.

The conventional wisdom of any point in history is to find someone who has done what you want to do and follow their example. What if there hasn’t been anyone you know of who has faced what you’re up against?

The desert is that place where kings and queens are made

We think that success is the result of greatness happening to us. A stoke of luck. Hard work finally coming through. Overcoming the odds and winning.

But the truth is, it’s in the places where we’re tested the most that forge icons. Let’s look at the historic and Biblical character of David, for instance. We naturally think of his battle against Goliath as the pinnacle of overcoming insane odds. But that was just the first step.

The man who would become king was birthed in the desert while on the run from a man who was like a father to him: King Saul. Saul was filled with so much jealousy at David for numerous reasons that he tried to kill him. Repeatedly.

David fled to the desert

It was in this lonely place that he was prepared for what would end up being his reign as king. He learned to trust himself and God. As he waited in the desert, he was joined by 400 people who would become a mighty army.

The experience serving them taught him how to lead. He learned to listen to wisdom instead of the opinions of others. He learned what sacrifice really looked like.

Let’s look at a modern-day icon

Oprah Winfrey spent years in a proverbial desert before becoming one of the richest and most successful names in history. She struggled as a TV anchorwoman when she was just getting started in media as a co-anchor in Baltimore. Winfrey was sexually harassed numerous times and fired less than eight months after taking the job.

What fueled her belief that she could overcome this challenge was the faith she had in herself after surviving a hellacious childhood.  She was victimized as a child through sexual abuse by her cousins. She grew up in poverty and lived in different family member’s homes until her father took her in. That’s just part of the horrendous experiences she endured.

Winfrey made herself strong by refusing to see herself as a victim, and never backing down from challenges. According to Business Insider, she transitioned the program “AM Chicago” from the lowest-rated program in Chicago to the highest-rated one. This program would eventually become the Oprah Winfrey Show. The rest is history.

Your trials have a purpose and it isn’t punishment

We’re conditioned and trained by parents, teachers, and institutions to see trials as something to avoid. So many people are trying to work more to make money so they can be comfortable. Yet comfort and growth are opposites of each other.

Difficulty, trials, and challenges are how you are made into the best version of yourself.

“Pain can be your best teacher because it has your undivided attention.”

(Excerpt from Be Solid: How To Go Through Hell & Come Out Whole)

When you choose to allow your hardest challenges to be a personal trainer, everything changes. The perspective shift is essential. You’re able to now see fully where your mindset is causing you problems. Then you’re able to make the shift and experience real growth.

Where the fire and I intersected changed everything

My lifelong greatest fear was rejection and abandonment by the one I gave my heart to. I thought getting married saved me from this coming true. I was wrong. Yet it was in the hell of my worst heartbreak that I found what was really missing: I didn’t know how to love myself.

Would I have ever learned self-love and personal wholeness if I hadn’t been brought into the fire of heartbreak? I don’t know. But instead of letting that experience break me, I used inspiration from people like Oprah to let the challenge and difficulty transform me.

Your worst pain can be the vehicle that takes you into your best life. If you’ll allow it. And when you fully commit to yourself to overcome the pain so you can live your best life.

You discover that there’s strength in you that you hadn’t tapped yet. This is the path to becoming unstoppable.

The best trials and challenges are ones that come with fire. See your brokenness for what it truly is: a need for you to see yourself wholly and grow your faith.

You can define faith however you want.

Faith in self. Belief in your higher power. Faith in God.

Trust in all of the above.

Don’t run away from the challenges that lay in front of you, no matter how impossible they may seem. You were made to face giants. It’s part of the human story.

You will find the motivation, determination, and power to overcome your hardest challenge present here.

If you find yourself in a desert, stay. It’s where you become the best version of yourself.

D Grant Smith is known as the Growth Farmer, which means he has an old-fashioned approach to living a whole & healthy life. Get his free ebook called Love Is The Seed To Success, that gives help in healing relationships and growing healthy ones. His new book Be Solid: How To Go Through Hell & Come Out Whole is about the journey into self-love and self-care after heartbreak and personal loss. He’s an empowerment superhero who would love to give you encouragement so feel free to reach out!