The Yoga Mat and Me 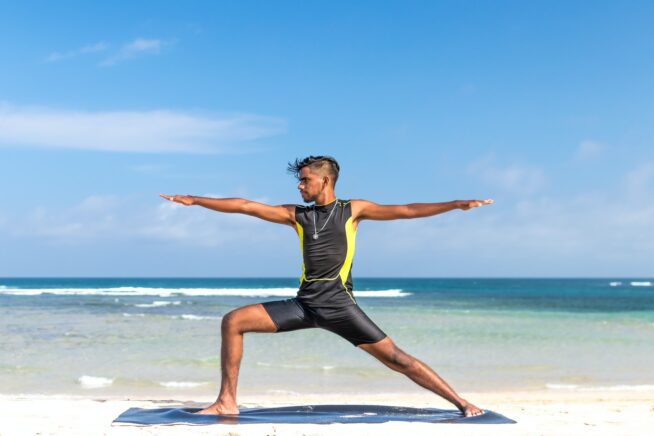 For years, I would go to bed late to wake up to alarms ringing in quick succession at seven every day, reminding me once again of my parents’ dogged insistence on exercising my weight off.

As a young Generation Z or borderline Millennial teenager, like most of those my age, I have been bombarded with what I liked to call body-fit posts everywhere and anywhere I look. And for the longest time, I wholeheartedly chose to believe in them.

A combination of parental pressure, societal expectations, and cultural standards combined to create the perfect hailstorm of internal anger focused on skinniness, and an unhealthy and unproductive obsession with food.

To the average outsider, I seemed like a fit, fairly healthy young man. But in reality, the turmoil inside me was not only eating me from the inside out but actively destroying my body.

Imagine the surprise when this seemingly healthy 150 pounds, young teenage boy found out that he was Type 1 Diabetic. A disease that he was taught was lifelong, difficult to manage, and nearly impossible to force into submission. A boy who loved food but starved himself from it, counting calories and burning them off as if he was on a bodybuilding calorie diet, and then giving in to the temptation of unhealthy foods and binging anyways.

A man whose family believed that a fit, gorgeous body was attained by binging, then exercising the calories off and highly encouraged the behavior. A society where this behavior was not just anti-normalized, but taboo that he didn’t realize he had a problem.

That boy was me.

I struggled for nearly three years with the weight of my diagnosis, at first continuing on the unhealthy spiral of food binging and calorie counting until a yoga session finally made things click.

Public school mental health days are rare, and I am a strong proponent of them. They give kids an opportunity to sit back, reflect, and take their minds off of the hustle and bustle of daily life to breathe.

I remember the day as one that will forever change the way I have and will continue to live life. I went in around six in the morning for a session of yoga before class, expecting to help lead it as I was one of the students who had arranged for the session to happen.

Instead, I got a lesson in humility, acceptance, and the importance of self.

Instead of diving into simple yoga poses and stretches, to begin with, the instructor asked each of us to sit and simply talk to her for three minutes each, alone.

But what surprised me the most during my talk with her was not the conversation we had, but the offhand comment she made as I made my way out. Pleasantries and a thank you could have sufficed, but for some reason, she felt compelled to tell me that I looked dissatisfied, sad, and lost. That my eyes seemed heavy and burdened and to reach out to her if I would like additional yoga sessions in the future.

As someone who is notoriously stone-faced and private in public, I surprised myself when tears began to roll. That instructor had found my breaking point. After another group session, I came back to her and told her everything.

Something about her made me feel like I could confide in her and the fact that I did most likely saved my life. I told her about my efforts to calorie count, my diabetes, and my feelings of sadness that I had no control over my body. She simply listened and asked me to come back to her yoga studio that afternoon.

Instead, I got a lesson in humility.

And eventually, that afternoon turned into multiple afternoons, tumbling into three years of free yoga lessons in exchange for volunteer hours. Over time, she worked with me one-on-one, just as she did the very first day I met her.

I learned reiki from her, an ancient art of meditation, and slowly, but surely, began to turn the tide against not only my disease and diagnosis but my own self-destructive relationship with my mental health.

While I will admit I ended up in much better shape than I would have ended up in otherwise, no longer did I believe that the standard of skinniness that was imposed on me was something that I should fulfill for the benefits of others. The cultural standards, societal expectations, and parent’s warped philosophy with exercise and binging had no power over me if I didn’t give it any.

The yoga studio’s emphasis on personal fitness, commitment to self, and looking inside oneself for betterment transformed me on a fundamental level. Meditation practices and yoga are highly intertwined. Meditation emphasizes long-lasting mindfulness in every aspect of life.

It asks you to consider the “why.” Why are you choosing to take this route to work today instead of the other? Why do you not feel like getting out of bed so early? Why do you feel so uncomfortable in these situations?

This reflection on mindfulness that meditation teaches you asks us to pay attention to the parts of our life that we often do on autopilot or overlook. It teaches you to listen to your body on the most fundamental level, from the rising and falling of your chest to the white noise that rings in your ears when you are trying to fall asleep.

For me, while it was highly uncomfortable at first, I soon learned that after meditating at the beginning of a session of yoga at the studio, I felt physically and mentally relaxed. The worries of homework, sports practice, and college drifted away, not gone, but suddenly not so heavy.

And in time, I learned to use meditation myself away from the studio as well. After the next couple of bad doctor’s appointments where my medication that I was placed on increased and was given a couple of stern talking-to speeches by the adults in my life, meditation seemed like the perfect retreat. And it truly was. I was able to see my diagnosis for what it was – a conglomerate of mental pressures that had manifested physically in my body as an illness and toxin.

The root of my problems was not the food on the table, or how many miles I had run that day or how much sweat I was producing, but rather the exact thought process running in my mind’s eye.

Meditation taught me positivism. It taught me to physically breathe and mentally take a breather. Once my mind’s eye and mental thought processes were cleared, I was able to realign myself physically as well. I took the time and effort to redouble my efforts toward my physicality.

No longer was I running endlessly and ‘working out’ doing something I didn’t enjoy but doing increasing levels of yoga movements and difficulties that made me feel both emotionally and physically satiated.

After school, I spent hours over the course of years learning and training myself to listen to my body. Every shake in an uncertain pose, odd twist of the ankle was not only physically engaging but made me stop the world around me. Over time, I found that not only did my cardiorespiratory fitness and stamina increase but my diabetes A1C levels, which marked the severity of my condition, began to plummet.

Today, I can confidently say that I am one of the few Type 1 Diabetics who has my disease fully under control.

I am the rare person who was able to stop his medication completely and avoid life-long dependence, with a much healthier relationship with the foods I want to eat and the ones that I need to eat. I did not, however, beat diabetes. I beat myself. I beat the negative thoughts that used to control my life and the societal voices that played me like a puppet. And I am that much happier, healthier, and freer for it.

Jake Wolff is a student entering his sophomore year in college in Philadelphia, PA. He got into the world of meditation and yoga his senior year of high school and it has had significant positive benefits to his personal development. He works as a representative for Thrive Flower CBD and helps people discover the benefits of alternative plant-based medicine.