My Predictions for the Year 2084 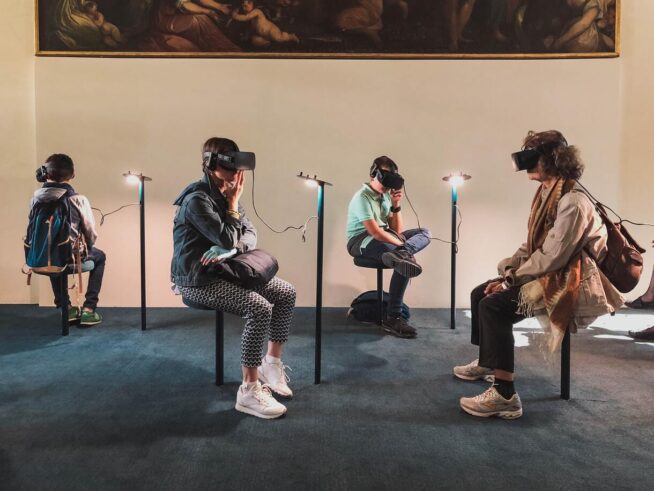 I can’t remember my answer but I can tell you one thing for sure about how I answered: I was wrong.

In 2010 the iPad came out and Steve Jobs wouldn’t let his children use it for fear it would be too addictive. Bandwidth speeds were about 2.5 Mbps. CNBC anchors were laughing at me for saying Apple would be the first trillion-dollar company and… that year I got married. All of those statements would be impossible to say 10 years later.

Perhaps the best sentences that can easily describe 10 years from now and be correct will be statements like: “That seems unbelievable!” and, perhaps, “That could never happen here!”

But let’s give it a try! Ten years from now (or 64) we can take the trends that exist now, throw in a little bit (or a lot) of spicy tension, and sweeten it with some chaos and a dash of inspiration. What we end up with is a clusterf*ck planet mixed with cool high tech.

We’re upping a “g” almost every two years and upping bandwidth at an exponential rate. With “10g” on our phones, we’ll look back at 2020 and laugh about how slow the internet was and how Zoom calls were so low quality and how you actually had to “sign up” for bandwidth as opposed to it being a natural right, an important commodity of air itself.

My children will laugh at me when I’m nostalgic for the days when it wasn’t so easy to go into a complete virtual reality with millions of pixels every centimeter and once you are transported in it it will feel as real to you or more as any other reality.

I will be able to “VR-port” into work, go into my office, see my coworkers, go to meetings, all without leaving my home. Haptic sensors will not only make me feel everything I touch in Microsoft VROffice Suite but also massage my muscles so they don’t atrophy in case I do overtime.

B) AUGMENTED REALITY WILL OPERATE SIDE BY SIDE WITH ACTUAL REALITY

We’ll walk by a neighbor and if his settings are set for “everyone” then we’ll see a floating image of the last movie he saw or recent photos from his latest vacation. Or a listing of his political beliefs, on display for all to see just in case you want to have (or avoid) a conversation with him.

This will be a direct result of increases in bandwidth, storage, and user interfaces for AR.

C) THE RISE OF CRYPTO

When COVID finally ends, many will abandon the expensive cities for safety reasons, quality of life reasons, financial reasons.

Because of increases in bandwidth and the ease of use of Zoom, there will be no more need for office buildings to be full. People could live anywhere and work in the 2D virtual office or in Microsoft VROffice.

With fewer people and companies, the tax revenues will plunge just when the deficits are spiking. Mayors in each city will be forced to fire teachers, garbage collectors, police, etc. Crime spikes, garbage everywhere, and fewer tourists will want to go to each city.

Cities will need to create incentives! Each city will create a local cryptocurrency to provide incentives. New York City, for instance, will create “NYCBucks.”

The idea: Everybody in NY gets a steady UBI (universal basic income) in NYCBucks (instead of dollars), and everyone who visits NYC as a tourist gets an allocation based on how many days they would be in the city. You could only spend your NYCBucks in NYC.

For every transaction both the buyer and the seller “mine” micro NYCBucks pro rata with the size of the transaction. For every 100 NYCBucks you mine, you can exchange for $100 and $100 is deducted from your state and city taxes.

Tourism begins to come back to cities. And businesses return and require more employees to be local. Cities, for the moment, are saved.

D) U.S. CURRENCY WILL COLLAPSE, BUT NOT THE WAY PEOPLE THINK

PART 1: Everyone is worried about hyperinflation.

Unfortunately the value of a currency is based not on just supply but also on demand. The demand for the dollar is too high. Everyone in the world wants out of theirs and into ours.

The Federal Reserve right now is scared to death of DEFLATION. They would kill for some inflation right now. So they print more and more money.

In 2020, there are three electric grids in the United States: East, West, and Texas. Texas secedes first.

The Army refuses to get involved. Other states begin to secede. And soon all of the states secede in one giant Secession Convention held on Zoom.

Each state works out trade agreements with the other states, in an EU like fashion. Washington D.C. is kept on life support but with only the Departments of State, Treasury, and Defense.

A rotating group of governors or lieutenant governors are in charge of each department. Allocations are decided by representatives from each state who will occasionally meet via Zoom. Capital Hill is turned into a museum to attract declining tourism.

Crypto to track everyone with coronavirus and those they go near. And the more you use it, the more “tracing crypto” you mine, which the governments of the Blue states translate into Blue Dollars.

But then the executives of the Blue states realize it’s not enough to contact trace but also compliance trace.

But then it’s best for society if compliance also includes any hate speech, or maybe hate thoughts, or being around people who may have been around people who didn’t think the right thoughts. “You have to keep with the times,” the media will cry.

More and more people are Social Justice Mining and the governments of the Blue states need to borrow money from the Red states to fend off hyperinflation.

The Red state bankers are getting tons of fees putting together the bonds for the Blue states under the premise that these contained the densest, most successful cities and were not liable to default.

But the Red state bankers will get too greedy, the terms too egregious, the Blue states too desperate for money and each individual state’s currency starts to devalue, leading to a currency crisis.

And since Blue Dollars and Red Dollars are mostly tied to the old U.S. dollar, the dollar starts to crash vis-a-vis the euro. The Red state banks collapse because of all the debt the Blue states owe them and the Red state currency collapses, triggering a Blue state collapse as well.

As a last resort, the people decide that the incentive crypto dollars they had been using (e.g. NYCBucks mentioned above) will be the currency for all of the states.

The dominoes fall on every major fiat currency around the world and they all switch to a fork of USBucks called EarthBucks. EarthBucks and USBucks usually trade at 1:1.

The domination of crypto will be complete.

E) STORAGE WILL BE 100X IN SPEED, SECURITY, AND CAPACITY

Because of VR demand and enormous blockchain demands now that crypto is widely adopted, cloud storage demands will be 1000x what they currently are.

The biggest companies in the world will be Amazon, Google, Dropbox, Apple but mostly for providing and upkeeping cloud storage and security for data. Every day of 2030 will add up to more information and data created than the entirety of the human race from 0–2025 AD.

Although quantum computing never will never work out (Murphy’s Law is constantly being broken), quantum cryptography is solved (it’s a simpler problem than quantum computing) and developed to ensure the safety of crypto after traditional public keys are decoded.

In 2020, genomics is in a state of 2D stagnation. Yes, the genome was sequenced and diseases based on single-gene mutations (e.g. Tay Sachs) are being regularly cured with CRISP technologies. But diseases based on multi-gene mutations are still impossible to compute. The addition of DNA computing perfectly is suited to solve the problem, uncovering the gene pairs that mutated for all cancers, heart disease, strokes, Alzheimer’s.

And then later… IQ, emotional intelligence, athletic ability, charisma. The Chinese and Texas governments have no ethical issues quickly using 3D genomics to create a country of super intelligent babies. Nobody knows what the final result will be.

Everything that can be chipped, will be.

The smart refrigerator will scan when you are running low on milk, do a blockchain transaction with the wallet at the grocery store, a drone will drop the milk in the panel in the back of the house feeding into the refrigerator. The more transactions the refrigerator does, the more USBucks are mined.

If you run every day, your sneakers will signal when they are worn out and a new pair is ordered.

If your cortisol spikes, your therapist will try to contact you. If you read the news and feel angry, the government will keep track of your actions. Maybe soft music will start playing.

Big Data and AI plus the tracking of neurochemicals will allow for Minority Report-style situations where crimes can be predicted before they occur.

All data is tracked and there are still pockets of society where social justice tracing keeps the population in line.

Depending on your DNA and other factors, the ideal number of steps, hours of sleep, hours of reading, vitamin D, calories consumed, water drunk, etc. will be counted each day. But more than just “fitbit style.”

It will be all agreed that competition breeds the best results so the results would be public and ranked by various health metrics so all could see who is healthier than whom. Dating apps will be set up to match those with similar health. USBucks will be mined by those in peak health at the end of each month.

Soon other factors of mental well-being will be measured and gamified as above — including the correct amount of dopamine uptake each day, serotonin, oxytocin (perhaps measuring sex?), and then meditation skills would be demonstrated on how quickly each spike in cortisol subsides into endorphins.

This will be ranked each month, with the winners earning the rank of “Buddha” and more USBucks mined.

People who have higher levels of cortisol may be taxed because of surplus cortisol levels, incentivizing people to reduce stress or not engage in revolutionary activities.

Boundaries will shift and countries will turn upside down. Fascism and laissez-faire attitudes will interweave depending on which state one is in, and the panacea of 3D genomics, VR, acommerce, crypto will be everyday parts of society we can’t imagine living without.

Some people will choose to permanently live in VRs while machines keep their muscles from atrophying. Their “geographic footprint” will decrease, allowing for more people to inhabit the planet. Millions of artificial worlds will be created to handle the overwhelming geographic footprints of society.

Will it be a better world? I have no idea. Time will tell.