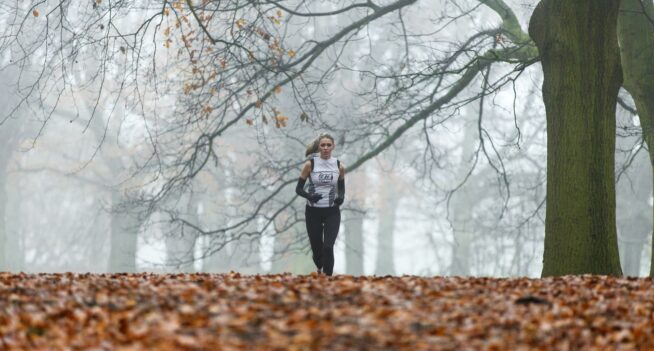 I was caught up in the moment, gliding the edges of my skates from side to side on that freshly-zambonied outdoor rink, I felt invincible. It was my first time ice-skating in years, and rediscovering that I still remembered how, even at 42, was like tasting my youth. With each elongating stride, the exhilarating thrill of gaining momentum returned to me as I puffed out clouds of warm breath. And then, just as I was beginning to embrace the Michelle-Kwanness of-it-all, showing off the moves to my admiring husband, my pick got caught in the ice and flew landing full force on my left knee.

That was my first thought, immediately followed by an intense pulsating pain. As my body lay belly-flopped on the glistening ice, I was afraid to stand up and find I could no longer walk, or my knee was split in half, or a bone was sticking out.

Only one week earlier, my husband had asked me to decide. “What do you think?” “Will you be ready for the marathon? It’s in five months. Should we sign up?” I’d hesitated. It costs over a hundred Canadian Dollars to sign up for the Ottawa Marathon, and I didn’t want to throw away money on an impossible goal. Also, there was my ego to consider: what if I said yes, and then just couldn’t do it? But I wanted to say yes, and I wanted to be ready. “Let’s do it,” I’d said. “Sign me up.”

Now, instead, my husband helped me stand, and I scared-penguin-walked to the edge of the rink. “Are you okay?” a fellow skater yelled. “Fine, thanks.” I felt relieved that besides him, there was only a family with two toddlers to witness my fall. Thankfully, there was no blood, or bones sticking out, but the pain together with the coldness of the day throbbed in a numbing way. I could bend it, though, there was hope yet for the marathon.

I spent the rest of that day with my knee cradled up above cushions and topped with an ice pack, watching reruns of the video my husband had filmed minutes before the fall. It looked as good as it had felt, yet now seemed obsolete. I searched the web for a local physiotherapist and phoned my friend who is a doctor.

“I’m signed up for the marathon in May,” I told the doctor two days later, slightly aware of how wrong it sounded, as if somehow there existed a more urgent cure for runners. Instead, I got a diagnosis of tendinitis, and a referral to physio.

One month after the fall, on January 15th, following eight sessions of physio, I got the okay to run. “Don’t go crazy,” the physiotherapist warned, “you know one of the biggest mistakes runners make is training too hard, too fast.”

To avoid overdoing it, I kept a written record of each training session, which looking back, reads more like the ‘diary of a hopeful knee.’ “The knee felt okay today,” “The knee tingled a little on today’s run,” “I was in the zone today, even with the knee.” By the end of March, somewhere along the path to healing, I really began to train.

One of my favorite things about long distance running is that you can’t cheat; there are no shortcuts to the process. The body and mind rely on muscle memory.

I ran three days a week, one fast-slow run, one set of hills, and one long run, which increased incrementally in speed and length. For fear of icy roads and sidewalks, I did most of the training indoors. On off days, I did strengthening exercises for my knee like a true believer. When race day rolled around, I felt almost ready.

Like always, the starting line was effervescent: excitement, nerves, and the pursuit of a shared goal intermingled with colorful t-shirts, smiley selfies, upbeat music, and the fresh scent of possibility. After an eager countdown, the starting pistol announced we were off.

“I’m already tired,” I thought, barely minutes into the first hill, “How am I gonna do this?” And then a burst of belated clarity, “What the hell was I thinking when I signed up for this?” But my body knew what to do from the start. It drove me forward instinctively, and found a squadron of similarly paced runners. I considered appropriate mantras to help me continue, “I’ve ran two half marathons, which together makes a whole,” I told myself, finding no solace. Switched to “lots of people run marathons,” which failed instantly. So I looked around me and realized “very old people run marathons,” but that was a double-edged knife. I was, however, amused by one of the signs around the 8th kilometer, “Smile if you’ve peed a little” it said, while a band clad in green and yellow played Brazilian music across the road, with a beat my feet tried to mimic. The knee felt cured.

Around the 17th kilometer, when the course got lonelier and hilly, I wished I’d said yes to my husband when he offered to run beside me. “I don’t need your help,” I’d said with conviction. “I’m going to run my own race at my own pace.” He had smiled, like a child who’d been given permission to play outside, and I had felt a little pride.

Big mistake! I thought now, as I adjusted my earphones and settled on the only mantra I could live up to: “One step at a time.” The course toiled on, dotted with encouraging signs. “If Trump can win, so can you!” one urged.

It wasn’t until I passed kilometer 35 that I truly thought I’d finish. The roles were reversed, and although I wasn’t certain that my body would cope, my mind told me I’d crawl to the end if need be.

The slight upward slope on Sussex Drive heading toward downtown might as well have been Mt. Everest. I noticed that everything in my body from the waist down was in pain, never mind the once injured knee.

For the remainder of the course I went through fits of delirious self-realizations that included “I CAN DO ANYTHING,” “I wanna cry right now.” “MY BODY IS SO STRONG,” “I need ice everywhere.” “I AM SUPERWOMAN,” “I’m gonna die.” The midday heat beat down on the circuit as race defectors lay down their relinquished bodies on the grassy patch beside the road. I felt no superiority as my stride narrowed, fighting instead, the ever-growing urge to join them.

When I passed the 41st kilometer, fate sent me Shakira, a familiar Latin tune that held my hand as I rounded the last turn to see the end. I managed to cross the finish line with my arms held up high and a smiling face, really invincible this time, but paradoxically, equally destroyed.

It might appear, at first glance, that I ended up right where I started, on the sofa cradled above cushions, ice packs over my knee. But I’ve heard it said that if you can run a marathon you can do anything, and I’ve done it, I’ve ran a marathon. One step at a time, the possibilities feel endless.

Adriana Añon is a Uruguayan teacher and writer who has lived in Japan, Brazil, the U.S. and Canada. Nomadic life has given her an early awareness and appreciation of different cultures and she writes personal essays that seek to illuminate some aspect of our shared humanity. She has learned from running that like most things in life— it begins by taking that first step, and then refusing to give up.