Even during a Pandemic, Women Are Expected to Look Their Best 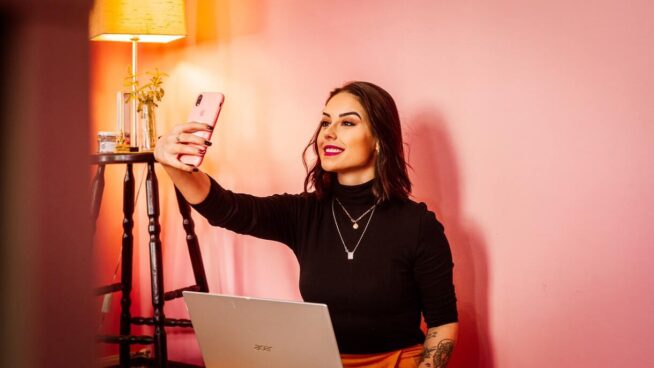 Whenever this pandemic ends, the beauty business should be booming. During the COVID-19 shutdowns, women everywhere have been going without services created to keep them feeling their best. These multi-billion dollar industries (beauty, skin, nails, hair) depend on us to depend on them to determine our self-worth. And sometimes, we actually believe them.

I don’t mean to shame anyone who loves doing some or even all of these things. Self-care is the best care and pampering ourselves is something we should never feel guilty about. I get my nails done professionally because I love how confident I feel and look with freshly manicured nails. And for someone else, getting their hair done or a spray tan every few months might give them that same confidence boost.

But when someone sent me this “females after quarantine” meme (pictured below), it didn’t make me laugh. 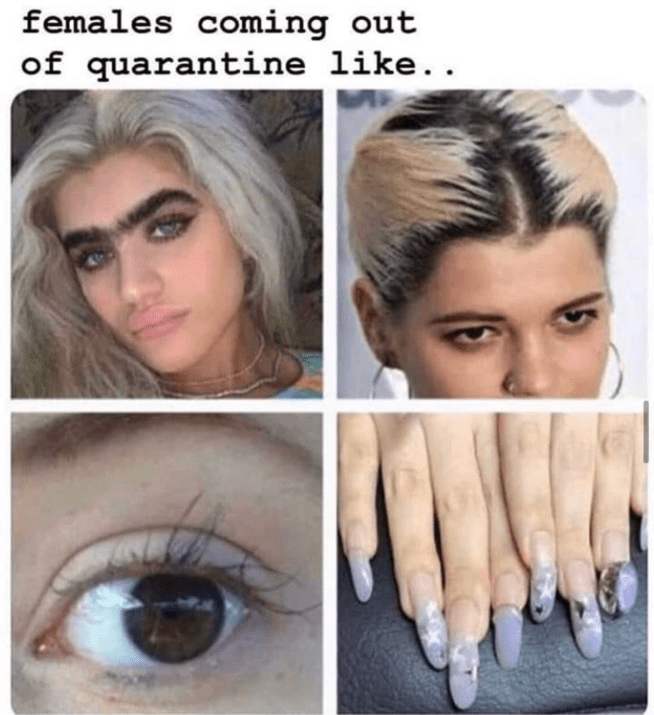 Image Source, although meme has been edited and changed many times by different users.

The unrealistic pressure for women to look put together, polished, and without flaws at all times, continues to exist, even during a pandemic.

Forgive me for having body hair and grown out nails, but where is the pressure for men to get their shit together after this lockdown is over?

And yes, you may accuse me of not having a sense of humor. I get that memes are meant as jokes. But I didn’t find it funny. It only reminded me that the constant criticism and pressure for women to look “a certain way” exists, and so does the silence surrounding men’s appearance.

“Females during quarantine” is just another joke made at our expense. It’s a shame that even during a crisis, a time where we need more self-love and compassion towards ourselves and each other, women are still being shamed for less than perfect looks while men get none of that pressure.

Or have you already forgotten about the dad-bod obsession of 2015?

The dad-bod phenomenon is a prime example of the inconsistency in standards we set for men’s and women’s physical appearances.

In 2015, when online photos of shirtless male celebrities like Leonardo DiCaprio, Chris Pratt, and Vince Vaughn surfaced, showing a “softer” look than we’re used to seeing, something happened to the previous standards for Hollywood men.

Instead of body-shaming and backlash, we celebrated these men for rocking a less than perfect physique. This would be a monumental step forward if we were also celebrating women with normal bodies. But we weren’t.

And suddenly, the world announced they loved the dad-bod.

Dad-bod: “a male body type that is best described as “softly round.” It’s built upon the theory that once a man has found a mate and fathered a child, he doesn’t need to worry about maintaining a sculpted physique.” This InStyle article wrote: “A dad-bod doesn’t care about hitting the gym morning and night; he would much rather order pizza. (Our kind of guy.)”

Where is the mom-bod movement?

When the dad-bod phenomenon was at its peak, I don’t remember seeing men stand up and proclaim their love for women who skipped the gym. There were no articles praising women “who would rather order a pizza than work out.”

We have never put the same amount of excruciating pressure on men to have perfect bodies, faces, asses, etc., the way we have on women. It’s exhausting.

We pick apart the women who don’t put the most effort in their physical appearance, but men, we celebrate just for showing up. (Ahem, Ed Sheeran.) 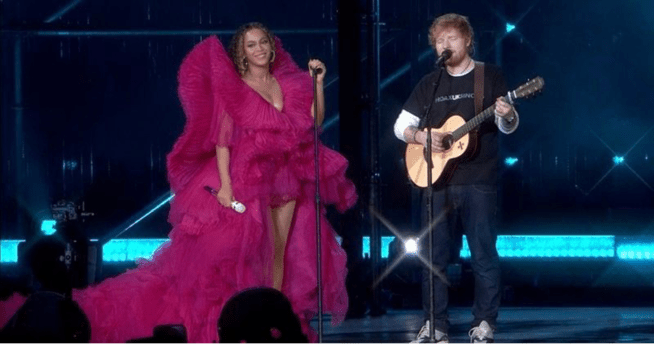 In 2018, artists Beyoncé and Ed Sheeran came together to perform at Global Citizen Festival. Beyoncé appeared on stage wearing a beautiful pink dress, ruffled and angelic, as she does. Sheeran, well, he walked on stage in a T-shirt, jeans, and unkempt facial hair.

The internet went crazy. This Revelist post titled ‘This Photo Of Ed Sheeran Next To Beyoncé Perfectly Sums Up Garbage Gender Norms’ said it best.

“If you’re going to perform next to Beyoncé, this is not what you show up wearing.”

Does this tell us something we didn’t already know? That women have to try twice as hard to prove they belong, even Beyoncé? She had to show up in a ball gown. If she wore a t-shirt and jeans, the critics would destroy her for being lazy and not caring about her appearance.

Yes, even Beyoncé herself has to swallow her pride, stand up next to a man who won’t even put 1/10th of the effort she has, and do her job with a smile.

Our looks are criticized constantly, and our bodies are picked apart and held to impossible standards. I thought, even for a moment, that in a time of crisis, perhaps the world would be a little kinder to women.

But even during a pandemic, we get shamed for not looking our best. And memes are created to shame us for not looking perfect after a quarantine. I’m sure some may have found the memes funny, but I wasn’t laughing.