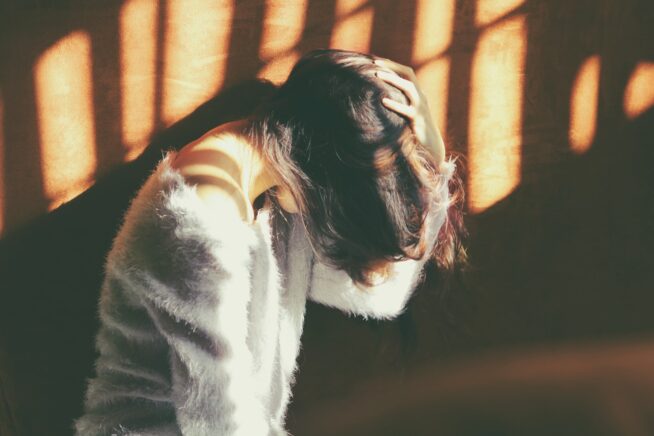 Walking in the doors of Target for the first time since the pandemic began should have been cause for joy — the kind of joy that involves dancing through the aisles in song. Instead, I walked through the store wearing my mask and thinking, Something is very wrong with me. On the heels of that thought came another, and no one even notices.

I know that I am not the center of the Universe. My own perhaps. But I don’t expect strangers to notice my pain. I don’t even expect friends to see it. After all, I hide it far too well. By being high functioning. By being strong. By keeping myself up, up, up relentlessly.

And I do it all in silence.

But being strong doesn’t mean breaking alone and in silence, allowing no witnesses to see us fall apart.

That’s what I keep telling myself when I try to do it all and be it all with no one to lean on. I keep trying to make myself stronger than I am. After all, why wouldn’t I? I’m a single mother in a culture where single parents are told we have to be both parents. But we cannot be more than the one parent that we are. We can’t compensate for the missing nuclear family, and yet the pressure to do just that is enormous.

I am breaking under it.

Then there’s the part of society that tells us that if we are single — as in, status unmarried and living alone — we should also learn to be enough on our own. We get the idea that we aren’t allowed to lean. We aren’t allowed to need anyone else, even for a minute. Even when partnered, we spend so much time trying to hold ourselves up so that no one ever thinks we can’t do, and be, it all. It’s exhausting.

I’m self-employed, too. I am the manager of my time, the one who has to keep it all going. Even when I’m sick. Even when I’m exhausted. Even when I just need a break. No one else will pick up the slack for me if I’m not my best self at work. There are no sick days. No paid vacations. There is only me, holding up the world we’re living.

It would be easy to think that being strong is holding all the weight while steadily breaking beneath it, but that is not strong — and it’s not sustainable. Eventually, our bodies break down along with our minds. We succumb to illness — mental or physical. We cannot continue pushing ourselves and trying to be more than one person doing the work of two or more. We have made ourselves the village, and with that pressures comes a whole village of problems.

I cannot be more than the one parent I am. I sometimes need to lean. I need days where I don’t have to be strong at all, so that I can be human. I can’t be the infallible machine, a worker who never takes a break or a day off or a breath. I am learning to accept my limitations as normal and human rather than as personal failings.

Sometimes, I fail at doing that, too.

But strength sometimes looks like asking for help — even when it’s hard and we hate it, and we’d rather do anything to avoid the vulnerability of asking. It may not feel like strength, but it certainly is. We have to get around our hang-ups long enough to admit that we cannot do or be it all. We need help sometimes — like anyone else.

Strength can look like taking a break or taking a rest. It could be going to bed early or taking a day off to sleep in. It looks like taking an actual lunch where we only eat instead of endlessly multitasking.

Strength sometimes looks like an intentional yes or no — when we turn down obligations that leave us drained in exchange for spending time in ways that bring us joy or rest or relief. It’s accepting that we are adults who don’t have to explain why we do or don’t want to do something. It’s living our lives for ourselves rather than for the approval of others.

Strength is often prioritizing ourselves — even if it hurts someone else’s feelings. It’s being firm that self-care is necessary and non-optional. It’s making that time a non-negotiable priority.

Strength looks like letting ourselves be helped. By admitting something is wrong. By speaking up. But also by letting other people show up for us without trying to pretend we don’t need them.

Sometimes, strength is telling someone that we don’t want or need their advice and only need them to listen so that we don’t feel so alone. It’s calling out their inattention and asking them to please tune in to hear us. It’s asking that they shelve their discomfort to sit with us in the darkness without trying to fix it or cheer us back into the light.

Strength isn’t breaking, alone in the dark. It’s not doing and being everything while our bodies and souls are wrecked in the process. It’s not being an island, and it sure as hell isn’t pretending to be okay when we are absolutely anything but that.

Today, I’m not worried about looking strong. I’m worried about getting through the day with my health and sanity intact. I’m focused on accepting that I will never be more than I am — but that who I am is absolutely enough. No more is required of me.

I am settling into that idea right now. I am not both parents; I am one. I am independent, but I need others, too. Sometimes, I just need to lean. I need to be able to feel how I feel— but I don’t have to do it alone.

I don’t need to build the emotional strength training that will allow me to take on the world. I need the understanding that strength is sometimes accepting that the world was never mine to carry.