A Psychological Trick to Help You Make a Better First Impression 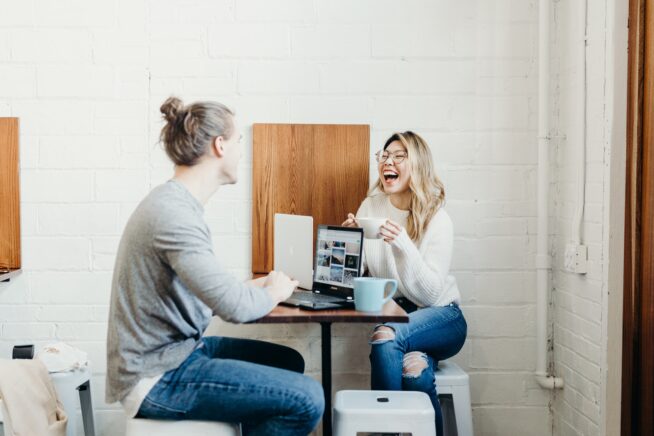 Imagine if you knew exactly how to introduce yourself in a way that would leave an amazing first impression. It’s the kind of minor change that could have serious ramifications on the rest of your life — after all, first impressions count more than any future impressions you’ll make in a relationship.

“First impressions…are tightly connected with the enduring biases subjects bring along,” write Schiller et al in their 2009 study on a neural mechanism of first impressions.

It’s possible to change a mind later on — but it’s easier to make a good first impression right at the start.

The problem, as a lot of us will recognize, is that when humans get put under any kind of pressure conversationally, we don’t tend to make good impressions. We’re prone to talking too much about ourselves and forgetting the names of those we speak with.

Luckily, the benefit of having monkey brains that often let us down when we most need them is that they’re relatively easy to hack. You can train yourself to remember people’s names, for example, by using some simple mnemonic devices. You can subtly influence your own actions and those of others with material priming. And you can learn to make better first impressions just by changing the language you use.

Your Brain on Positive Language

Authors Andrew Newberg, M.D. and Mark Robert Waldman tell us that “…a single word has the power to influence the expression of genes that regulate physical and emotional stress,” in their book Words Can Change Your Brain. That’s a lot of responsibility for just some words.

They describe how simply focusing on positive words can cause short- and long-term changes in our frontal lobe, while negative, fear-inducing words increase activity in our amygdala, the fear center of our brains.

Another study in 2009, conducted by Maria Richter et al, described similar results. They explain that the presence of negative words like “disgusting,” “grueling,” and “dirty,” cause stress in the moment as well as contributing to long-term anxiety. Positive words, like “refreshing,” “celestial,” and “warming,” conversely, decrease the expression of stress hormones.

How to Use Positive Language to Make Good Impressions

We know that holding positive and negative words in our brain has a real psychological impact on our mood, whether spoken, heard, or thought.

How can you use that to make better first impressions? Well, you tweak the words you use when you speak with someone for the first time.

It sounds so straightforward, but most of us are shockingly casual with our language, especially when meeting someone new for the first time. It’s scary and stressful for most of us, which can cause us to word-vomit anything that comes to mind. If you choose to talk about anything stressful (which is easy now — we’ve got the pandemic, the election, the weather events, and the increasing price of chocolate all top of mind) you might accidentally shove someone else’s brain into a spiral of stress, which will cause them to think less positively of you.

Instead, go into your meeting or conversation with intent. Be mindful and specific about the words you choose — it may be hard to wrangle “celestial” in casual conversation, but maybe you can talk about some warming hot chocolate you had or a refreshing cool breeze you enjoyed while on a walk.

It’s worth noting that all of the standard rules of good first impressions still apply here — body language, tone, and eye contact are all still important. You can’t just say “celestial” and be done. But the very words we use are often overlooked in the quest to make a perfect first impression, even though they can be vital.

Word choice sounds simple, but it’s also simple to ignore. We underestimate the power of words at our peril — they have very real consequences on how we perceive ourselves, and how others perceive us.

We like to pretend we’re at the mercy of our brains — that through no fault of our own, we forgot to buy milk at the grocery store, that we acted weirdly at a party for no reason, that Twitter has us hostage and doom-scrolling.

But we underestimate our brains. Often, we perceive the physical world as more important than our mental one, and we ignore that how we feel and think has a very real impact on our physical reality.

Just take the phrase “sticks and stones will break my bones, but names can never hurt me.” It’s categorically untrue, and we all know it — the words we use affect our minds, which affect our bodies.

That’s why this is such an effective technique. It’s easy, and most of us don’t do it today, at least not on purpose. Just by ensuring your language stays positive and doesn’t stray into negative wording when you speak with someone for the first time, you can help tip the complicated mental algebra someone else is doing to try to figure out whether they like you or not in your favor. All it takes is some positive language.