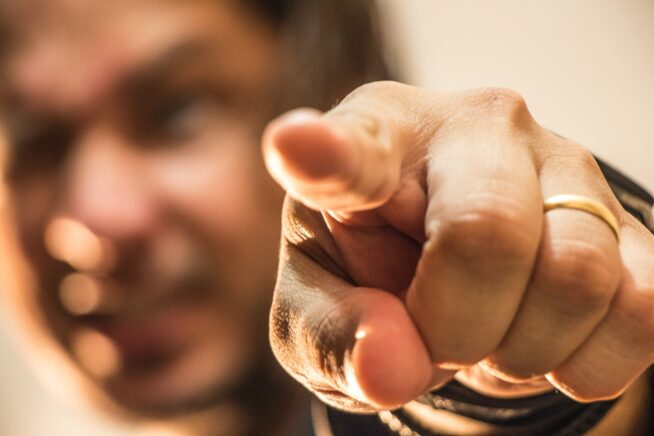 You say you want love. You’re swiping hard for it. You’re on all the sites (or, at least all of the free trials). You have your friends and coworkers (the few you trust) on your case. You even went so far as to write out your love-dream!

But, alas, it’s to no avail. Not only have you not met your person yet, you’ve got a truckload of evidence that there is a great human-drought out there! All that’s left for you are the scraps of society: liars, texters, and bunny-boilers.

What if the truth is that you are more of the antagonizer of this scenario rather than the victim? Meaning you are so much more a Don Corleone than a damsel/dude (for lack of a better masculine “d”) in distress. What if you found out that you haven’t actually been looking for love at all, but playing another sport altogether?

And, what if seeing and admitting that you are your love life’s biggest problem is actually good news? In fact, this revelation would free you up to play a better and braver sport. One that proves love easy to find and that the quest for it is a deeper, more spiritual one than solely a numbers game.

If you have always attracted, or been attracted to, the sub-marrying-kind and/or are only getting dating profile responses from “interesting” people, it’s best to suspect something in your own formula, rather than simply blaming the dating pool. Just like with Pandora Radio, if you don’t like the songs you keep getting on your personally-designed playlist, start suspecting it’s NOT Pandora that’s the problem.

Yes, YOU are the only common denominator in all the people you’ve dated. You picked them. You attracted and are attracted to them. You dated them. And, hell, many of you even kept and married them. There is a reason those particular crappy songs keep playing on your “playlist.” Best to stop looking so doe-eyed. Your fingerprints are everywhere. And, once you fully buy the realization that YOU are YOUR problem, you can do something about you.

In order to figure out what’s in your particular formula, make a list of all the people you’ve dated over the last ten-plus years (depending on how old you are). Once you’ve finished listing them all out, go through them. What’s the commonality between all of them (besides you)? What must your theories be about love, about yourself, about relationships, about all men or women, about marriage and monogamy … that would have you date, keep dating, crush on and/or suffer over this particular “playlist”?

Truly, you wouldn’t date a jerk, tolerate a temper, flirt with someone who is unavailable, or ignore so many red flags if you didn’t have something to prove, right?

Let me give you an example of one of my favorite crap theories about love. Back in the dark ages (a.k.a. my dating days), one of my favorite lousy and highly original theories for which I gathered years of evidence was: “people don’t appreciate me”. Well, what kind of man do you think I dated, coveted and was attracted to? Someone who liked me and thought I was great? Nah. Surprisingly (NOT!), I called those guys “friends”. I wasn’t attracted to anyone who really liked me; the man I wanted was the one who didn’t turn around when I walked into the room. The one who, no kidding, washed his privates after we had sex (can’t make that stuff up). Yep. That was MY type. Sneakily, my heart pitter-pattered for that kind of man and stayed comfortably dumb as to why I wasn’t finding lasting love.

Another great place to see what love-sport you’ve been playing is in your dating profile (even if you’ve retired it). Look at your profile and see if you managed to slip in any of the following:

Trustworthy, does not cheat, loyal, makes ME happy, takes risks, edgy, sarcastic, finds me attractive, mentally stable, emotionally available, not an x or a y, accepts me for me, sex does not get boring, unconditional, mutual, when things get tough he/she will go to counseling with me, no matter how often we fight, when times get hard, sticks with me through and through, everlasting, loyal, loyal, loyal and, what the hell, unconditional again.

In your profile, more than likely, you are unconsciously fixing what didn’t work in your last swings at love. Sneakily, you are invoking your favorite theories, pretending you are not. Go investigate it for yourself; hungrily and happily find your theories hiding within it; and, yes, rewrite it.

Truth is, the only way to change your tune when it comes to love is to see what’s in your current formula, and rework it. Be willing to prove something much braver than drought.

Dare yourself to invent a NEW sport or radio station altogether when it comes to finding love and be YEARS inaccurate about everything you sneakily believed to be “true” about you and love.

P.S. If you’re looking for even more reasons to say “maybe it’s me,” try Inner.U: our digital 12-session coaching course that equips you with lessons, coaching assignments, and prizes to change your life for the better.