Why a Snowstorm Was the Perfect Pandemic Weather 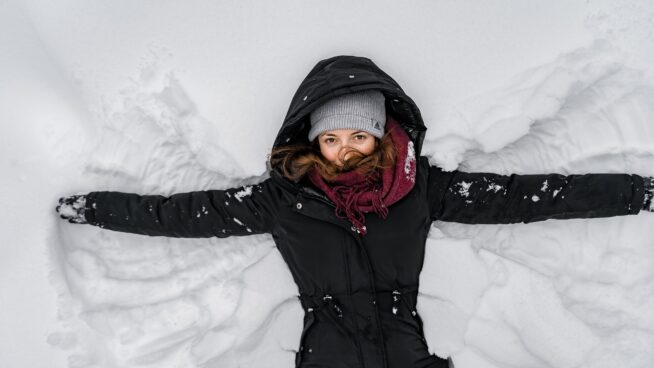 Two weeks ago, The Netherlands had its first snowstorm in ten years. That Sunday morning when I woke up, there was 15 centimetres of snow on the ground. Instead of the quiet stillness that often comes with snow, a blustering wind had left most of the trees brown. Our back garden, though, is quite sheltered, and so there was a snowy blanket covering the table and chairs, the plants and crates of bulbs, as well as snow covering the branches of the sumac tree behind the house.

It’s incredibly unusual to get so much snow in The Netherlands, so, wanting to make the most of it, we went outside. It was our one-year-old, Otis’s, first time seeing so much snow, and we wanted him to experience it, too. I lay down in the snow with him to make snow angels (he didn’t like this), we had a snow fight (he thought this was hilarious) and my husband had a go at skiing downhill through the street on his short skis. For a good while, too, we walked around with Otis in our arms, tramping through the thick snow while he stared at the children going past on sleighs.

An army of walkers in the snow

When it got too much for him, my husband took him home, and I went for a walk in the snow, eager to be outside some more. There was a strong, cold wind that kept blowing flurries of snow into my eyes, but there was a thick layer of snow down – 30 centimetres deep in some places – and I was dressed warmly, in ski trousers, ski gloves, five layers, a waterproof jacket and a woollen hat. I turned out of our street and trod through the powdery snow. And I wasn’t the only one. There were loads of people out there, walking by themselves or in twos, or out with their children. We all walked right in the road, which we had as good as completely to ourselves – the only people who were out driving really had to be somewhere, and were crawling along on the snowy streets before they got out to the motorway – and enjoyed the novelty of the snow.

At least the pandemic has been mostly kind to us in The Netherlands when it comes to the weather. After an improbably long period of spring weather during the first lockdown and a hot and sunny summer that seemed like it would never end, now this. And on the weekend, too! Everyone who was out, was having fun. There were children on sleighs, people on skis, people with snowboards, and so many people walking. All of the people who have been spending the lockdown doing the only thing you really can do – go walking – all seemed to come out at once. It was glorious. An incredible sense of happiness came over me as I was walking along, in the middle of the road, that had been taken over by an army of walkers. After such a long time of seeing hardly anybody in person except for a really small circle of friends and family, it was astounding to see so many people (they were really here! other people!), out on the street together, obviously wanting to make the most of the snow.

And, unlike in regular daily life during the lockdown, everyone was in a really good mood. People were greeting each other, laughing, smiling at children on makeshift sleighs (who were being pulled along in plastic crates), and throwing loose powder snow at each other. And, even less like in life in the lockdown, strangers were helping each other, stopping to give cars that had gotten stuck a push to get going.

A reason to go outside

The rest of the week we had fun taking Otis to the crèche in our hiking backpack, going on foot through the snow (which got many smiles from passers-by), and I went on walks through the snowy woods with him every day, often twice a day. On ordinary days working from home in the COVID-19 lockdown, I often don’t have the discipline to go for a walk every day (far from it!), but now, with the snow, I wanted to be outside as much as possible. Being outside, and especially on that first walk, when it seemed like our whole neighbourhood had come out of their houses, was positively exhilarating. There seemed to be a sense of kinship between everyone who was out: the lockdown has, at the very least, been wearing on most people and, now, there was finally something out of the ordinary to go out and enjoy. With the shops, gyms, cafés, restaurants, libraries, museums, cinemas and theatres closed, the snow was a major event. I hadn’t known how much I was missing just simply having people around, including strangers and passers-by, until I saw all of those people out there on the street, enjoying themselves. And it really hit home when, later that first day, two friends I hadn’t seen for a while happened to drop by for a spontaneous socially distanced walk. We tried to build snowmen, and, with one of them leading the way, I discovered a new route through the woods near our house I couldn’t believe I hadn’t known about before. Going out in the snow made my world a little bit larger – and I hadn’t realized how small it had become.

Of course, the snow was not just all-round wonderful. It wasn’t any good for all those who were stuck in their houses because they were too sick, too frail or otherwise unable to go out. And, to be sure, there are many, many problems that a bit of snow isn’t going to solve. Like small business owners going bankrupt because of the continuing lockdown, the increase in domestic violence that the pandemic has seen, and the disruption to children’s education due to school closures, with all the issues that go with that. The snow, moreover, won’t bring back those who died. Also, the fact that snow has become such a rarity in this part of the world is most likely a sign of terrible global warming, that we are seeing more and more of in our daily lives.

But, with the days blurring into one and social contacts dwindling, for those who were able to go out and enjoy it, the snow (and I speak for myself) was a welcome relief. One that helped break the monotony, and to do something to make the day memorable – for a change.

What helped you to break the monotony of life during the COVID-19 lockdown? I’m curious to hear your stories!

Saskia Bultman is an emerging Dutch/Irish writer based in The Netherlands. She writes personal essays, and loves anything to do with bold women in history, English literature and ghosts. You can find her on Twitter as @saskiamorna.