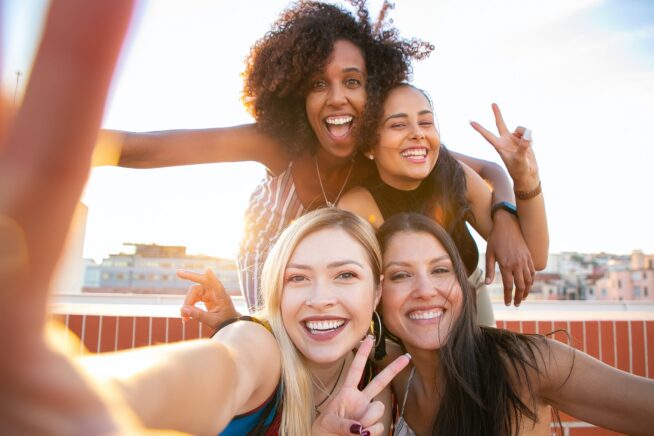 By now, you’ve more than likely read enough of our blogs, blurbs, and what have yous to know that we like to give names to our less-than-attractive traits.

From “mean martyrf*&cker”, to “sweet and sour chicken”, to “squeaker-of-the-house”, clearly, I have befriended, named, and leashed (for the most part!) some of my most ghastly traits.

This week’s subject matter is particularly near and dear to my (occasionally clogged) heart: two-facedness. The ability to say “yes” when I really mean “eff no”, and squeak when I am trying to be nice, but really am lying through my teeth.

I have decided to name this trait “two-faced tuna”. Why such a ridiculous name as “two-faced tuna”? It’s because my sister, Lauren, and her husband, David, before they had kids, had an awful rat terrier named Tuna. Tuna was nuts, shaky, and worse than just unfriendly, a mean chicken of a dog. He’d hate on you, but only have the balls to bite your ankles when your back was turned, as you were leaving.

And, guess what? So can my mom. I know, shocking, right? Again, hopefully by now, you’ve done enough coaching with us, or read enough of these blogs, to know this is NO real surprise at all.

I = my mom in so many areas, whether I’m a reaction to her, busy not being like her, being an upgraded version of her, or just plain being exactly her. And, by now, if I didn’t laugh, do something about it, or purposely opt not to, it would be duh-mb of me. But, for the sake of keeping this blog legal length-worthy, let’s not go into all of our similarities, let’s just talk about our fake niceness and lousy friend maintenance.

You see, recently, my mom got fired by one of her closest friends of fifty years. Her friend was done tolerating and excusing my mom’s bad behaviors. In her view, my mom, had been failing her for years – from not calling her, to being late, to only talking about her kids and her cooking, to blaming her for bankrupting my dad (p.s. my dad is pretty smart), to not thanking people forty years ago for saving tables for them until the Sabbath was over at the country club, and so on and so on and so on and so on.

How do I know this best friend turned ex-friend of my mom had this list on her? Oh. I spoke with her. Gasp!

Oh, don’t gasp yet. It gets worse.

First, I wrote her.

You see, I was so incensed that she did this right before my mom’s birthday (can’t say which number birthday it is here cause my mom is shallow and vain, a trait we don’t share — just kidding!) that I wrote her the following email, on my mom’s (and clearly, my own) behalf.

(Yes! I changed all of the names. But, otherwise, it’s verbatim.)

It’s been too long for sure.

I am sending this note to you as I’m in the middle of putting together a small gathering for my mom’s birthday and I’d obviously be remiss to not include you, not just for her, but for me.

That said, I heard from my mom that you fired her. She knew I was still going to invite you, but does not know what I wrote in this letter.

Lord knows, I’m not gonna defend her (okay, maybe a little), as I have fired her myself many times. She’s fireable. And, I’m sorry that she, once again, hurt your heart, didn’t take care of you, and disappointed you. I also know you have put up with, and forgiven, this exact same disconnected and cold behavior of hers (and theirs) for YEARS.

The only thing I can say (probably not true) on her behalf is that the fine print, or warning label, on her ‘packaging’ is not actually so small. In fact, it’s fairly large and loud. She’s great and adorable at many things and sucks sh-t at many others, i.e. picking up the phone. Who she is as a friend/mom/grandma falls short in many areas. Always has. But, again, that said, who I would want by my bedside, if ever I was sick, or whenever I’ve been sick, is that chick. Who I want to shop with, call as my pretend doctor, giggle with, talk cooking with, is she. Always.

And, who doesn’t have caveats, right? I mean, my very fallible folks have organized around your (husband) -Joe’s Joe-ness, out of love, no matter what. It’s part of the packaging that you either love, or don’t love, when it comes to friendships and either deal, know, accept, tolerate, forgive, or not.

Obviously, it’s your prerogative to forgive her or not, accept her foibles (lousy as they are) or not. I just was not going to sit by and not invite you or not say my piece/peace, even though it’s not really my business, except I Iove my mom and I have a similar flaw when it comes to friend maintenance.

I know she loves you, is scared of you, often feels like a disappointment to you, which is also FYI “home” for her as her folks weren’t an easy crowd either. Sad but so.

Please read this letter for what it is. Me butting in, sure. But, in honor of my love for you and for your daughter and clearly, for my mom.

I am a little nervous for your reply, but I figured love and courage are worth more.

Now, I wish I could tell you that our conversation, after I sent the email, was awesome and inspiring. It wasn’t. And, though I went in trying to save my mom and their friendship, what I ended up seeing was the relationship for what it honestly was: a lie.

Here were some of my other parting gifts:

Lo and behold, one of the my favorite things to teach people is about the nature of our less than sweet species: the fact that we NEVER test people to pass.

My mom’s best friend, who thought herself nice by swallowing her truth, was not nice at all. Was not saving my mom at all. Was not even tolerating my mom’s freak, but was in fact constantly giving her pop quizzes and letting my mom fail each and every time.

How nice is that?

Welcome to the species — print your fine print bigger, people, get your lousy traits and freak flag waived and waving. And, if you too are testing your friends, either help them pass or stop pointing only at their failure without seeing that you’re not being such a great friend either.

P.S. Identifying and naming our bad traits is just the first step on our way to bad trait redemption. If you’re interested in learning more about how to redefine yourself and be your best you, sign up for Inner.U, our 12 session online course that gives you the tools to hack into your own life, hone your dreams, and have every last thing you want in the areas that matter most to you: CAREER, MONEY, LOVE, TIME, FAMILY, and HEALTH. Do this life thing better from wherever, whenever!