What Happens After You End a One-Sided Relationship 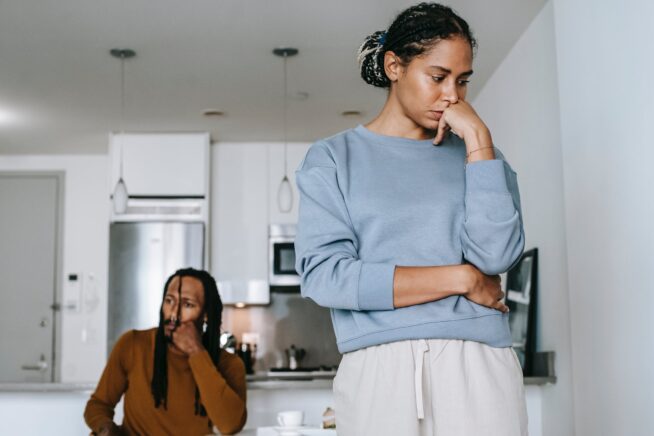 Many people, specifically people-pleasers like me, have found themselves at the exhaustive end of a one-sided relationship or friendship, wondering how they got there. Usually, during a period of self-reflection or therapy, we come to the realization that a certain person—like a romantic partner, a friend, or a family member—is stopping us from personal growth and happiness. This relationship might make us happy, but we know deep down that we deserve so much more.

This article breaks down the complicated aftermath that often happens once you’ve done the hardest thing and walked away.

A one-sided relationship is exactly as it sounds; unbalanced and unreliable. These types of relationships are recognizable because one person is putting in all of the work, the time, the energy in the relationship.

In the past, I was Friend A — the one who took on more than she could handle emotionally while Friend B neglected my wants and needs.

Friend A goes above and beyond for Friend B, but Friend B doesn’t seem to reciprocate, ever. Friend B forgets about plans but expects others to drop everything for them at the last minute. Friend B can always count on us for companionship, moral support, and advice, but when the tables are turned, they never seem to come through for us.

And if we find the courage to stand up for ourselves, if we confront them and tell them how we feel, nothing changes. They tell us we’re being sensitive or taking things too personally.

They’re experts at finding a way to place the blame at our feet. Always.

This exact scenario has taken place in my life during a failed romantic relationship with an older man and a horribly toxic friendship with a friend who drained me emotionally and mentally until I had nothing left of me to give to her. (I wrote about that here.)

I ignored the red flags (and all the orange and yellow ones too) in my one-sided romance until I admitted I was not loving myself while staying together with my boyfriend. Years later, it happened with my friend. I suffered every time they let me down, and I hated putting myself in these situations.

I wasn’t exactly sure how I got this deep into a one-sided relationship. Most of us never do; we look around in our friendship or romance, and we don’t know where it went wrong. What we do know is we want to end things with this toxic person. No, we need to end things with them.

When we feel that we cannot grow as a person, as a partner, as a human being with this person by our side, we must walk away.

Breaking up doesn’t happen overnight, and it’s rare to end things with a toxic person on the first or second try. If you have children with this person or a long history, it is far more complicated. With more time that passes, the harder it becomes to create a scenario where you see yourself living without them. And when there’s a long-term emotional investment in the relationship, we usually try every which way to make it work, even if we’re unhappy.

(There are countless fascinating articles that delve into the psychology behind why individuals stay in (and seek) toxic relationships.)

But when we can admit that we’re hurting ourselves by staying friends or partners with this person, that is when we test our strength, our might, our ability to love ourselves.

That is when we make the choice to stay for another month, another year, ten more years — or we get up and choose to fight for ourselves and our happiness.

It took several tries to end things with my toxic friend.

Even though I was emotionally drained from giving her all of my energy, and getting nothing back, I didn’t want to lose her. I stuck around. I continued to be her shoulder to cry on throughout her relationship problems, her work problems, her money problems. I invested all of my time in trying to help her out of debt and into a new job, but all it did was create more problems for me. She blamed me for getting involved in her relationship, she blamed me for everything.

Our friendship was exhausting, repetitive, overwhelming. I needed to move on for my mental health. I needed to put myself first and walk away from a relationship that was wholeheartedly harming me and my personal growth.

So, I did. I let her know that I needed some time to myself, and she said best friends are always there for each other.

All I could say was, “When was the last time you were there for me?”

I stopped replying to her texts after that which made her angry. I declined her invites to outings, and I stopped returning her calls.

It was easier said than done, but eventually, I separated myself from this person. And in the long run, I healed from the agonizing wounds of heartbreak and I grew.

It was scary to detach myself from someone who I’d been friends with for over 10 years.

Even scarier was to admit that I was happier without her; my coworkers noticed a positive change in my outlook. My family told me that I seemed less stressed. I really didn’t know how affected I was by staying in a relationship with someone who had been playing with my emotions through her own pain for so long.

I thought saying goodbye was the hard part. I thought doing the painful work of therapy, self-reflection, standing up for myself, and saying, “I think we should take some time apart,” was the hardest part of this process. I was woefully mistaken, and I learned that quickly.

The aftermath of leaving a one-sided relationship is just as hard on our hearts as the decision to leave.

If you have even the slightest people-pleasing tendencies like me, you never want to see other people unhappy with you. You will go above and beyond to make things right. You’ll feel terrible for ignoring their calls and texts. You’ll jump through every hoop to justify the decisions you’ve made that others can’t seem to understand. And that’s what I did after I walked away from my friend.

Mutual friends wanted an explanation. “What happened between you two?”

They couldn’t believe we weren’t friends anymore. Others gossiped behind my back that I was selfish for not sticking by her side. All of it weighed on me, but it didn’t change the fact that I knew deep down, I had made the right decision for my well-being.

The aftermath of walking away from a one-sided relationship also involves navigating the intricate pain of missing someone you know is not good for you.

I missed my toxic friend, and I hated admitting that.

It was a long time before I stopped beating myself up for missing someone who never treated me well.

My therapist explained that after so many years of having this person in my life, it was only natural that I longed for their phone calls and visits. There wasn’t anything wrong with missing my friend, she was an important person in my life for many years.

However, there was something wrong with returning to old habits and negative patterns while healing. Putting myself first was something new to me, and it definitely felt foreign. But in the end, I knew leaving this friendship was the right thing to do.

Something important to remember while dealing with the aftermath of a toxic friendship or relationship is that this process is incredibly exhausting — mentally, emotionally, physically.

Once you’ve made that critical step towards ending the relationship, you should recognize the strength it took to get there. You’re on the right path to getting what you deserve out of life and you should be proud of yourself. It is a privilege that not every person in a toxic or unhealthy relationship has for a number of reasons, such as children, financial dependency, fear, etc.

Fighting for ourselves should be a given, but it’s not easy for all of us.

This inability to speak up for ourselves and recognize that we deserve loving, respectful friends and partners stem from traumatic childhoods, unhealthy modeled behavior, and previous abusive/toxic relationships.

Despite what others say, you yourself know what feels right and what doesn’t. If walking away from a one-sided and toxic relationship feels like a breath of fresh air, then who cares what other people — including that toxic person — think. Let yourself breathe.

Love yourself enough to recognize that you deserve friends and partners who are as invested in your feelings as you are in theirs.

One last note that I’d like to leave my readers with.

When you decide to leave an unhealthy relationship, it isn’t foolish of you to hope that walking away may become some kind of wake-up call for them. It isn’t wrong that you hope they change because they lost you.

But please, do not count on this transformation.

Do not break up with someone if your only reason is hoping they change and want you back.

This is not walking away; this is taking a temporary leave.

You don’t need to justify your decisions to anyone. But recognize the difference between walking away for you and walking away because you hope the other person realizes they don’t want to lose you.

Change does not come easy. We know this. And I’m in total awe when I read the stories of brave persons everywhere coming forward after walking away from an unhealthy relationship. It is difficult, but you are strong, and you will look back one day on these hard days and recognize your strength. I certainly have, and I’m incredibly proud of myself for finally speaking up. For anyone reading this who is struggling to leave their own one-sided relationship, I wish so deeply for you to one day know how it feels on the other side.