The Original Rose Bak: What My Grandmother Taught Me about Life 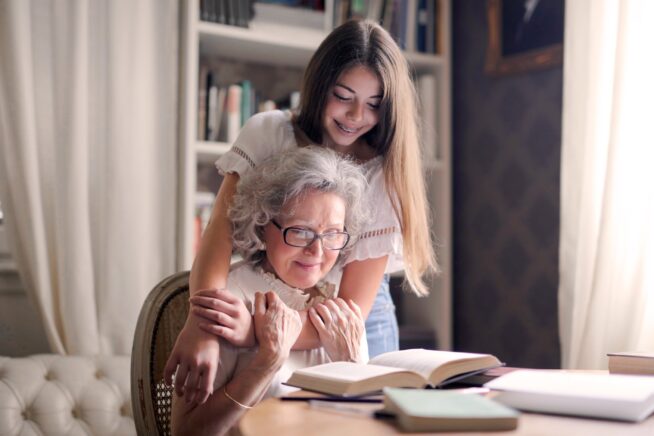 Thirty-two years ago today the world lost the original Rose Bak — my grandma.

Oh sure, there have been other people named Rose Bak throughout the years, but my grandmother was truly an original. One of a kind.

Grandma was born in Chicago in 1914. She grew up in the Polish neighborhood of West Pullman with her six brothers and sisters, in a brick house on Normal Avenue. Her parents had immigrated from Poland at a young age, and my grandma was a first-generation American.

She was deeply impacted by the death of her brother Leo when he was only a teen and later named her son after him. When one of her sisters entered the convent at the age of 14, and Grandma bonded with her remaining siblings. They were a close-knit group, and they all raised their kids together in the same neighborhood.

Like all children of immigrants, Grandma learned to work hard and dream big. She was extremely close with her mother, who taught her cooking and sewing and how to be “a lady”.

Grandma was a good student and very social and extroverted. The picture below is from when Grandma was on what would be equivalent to a homecoming court — she’s the beauty on the right, sometime around 1931. 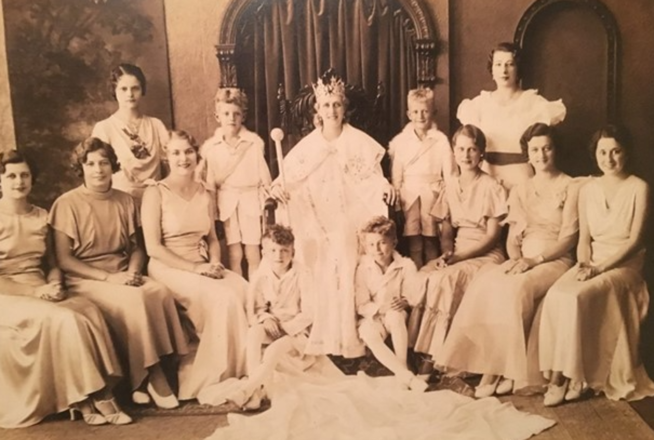 Grandma met my Grandpa when they were both singing in the choir at the Assumption Catholic Church. It was a popular activity for the young people in those days, and many matches were made through the choir connection.

Both of my grandparents had a huge sweet tooth. When they were dating during the Depression, they would pool their bus fare and use it to buy a pound of assorted candy from the Fannie May candy store. They would eat it together as they walked several miles to see a movie or do other activities.

Grandma married Grandpa in 1937 at the church where they had met. They had a huge reception at a country club in the suburbs, thanks to some connections Grandpa’s brother had at the time.

Their country club wedding was the talk of the neighborhood for years to come — it was unheard of in their working-class neighborhood to go to a country club where rich people hung out. At my grandparents’ 50th anniversary party, their friends and family were still marveling about their “fancy country club reception”.

My grandparents were married for 51 years before Grandma died at the age of 74, and they had three children together, including my father. Their children gave them eight grandchildren who brought them a lot of joy.

As the oldest grandchild, I was fortunate to spend the most time with Grandma and Grandpa.

I was named Rose-Ellen, after each of my two grandmothers, and my Grandma always insisted that I use my full name. Her full name was Rosalie, and it bothered her that it’d been shortened to Rose, so she was resistant to me shortening my own name. That’s one of the few things I ever defied her on, choosing to go by “Rose”.

When people ask me if I go by Rose-Ellen, I always say, “only to my grandparents and the nuns in school.”

When my grandparents still lived in Chicago, I would often spend the night with them. In those moments, I felt like the most special person in the world. They weren’t just grandparents; my Grandma and Grandpa were the parents I never had. With their love and encouragement, I was able to achieve far more than I ever would have without them. They were also the only people in my life who would make sure I had clothes that fit and shoes without holes and that I got a haircut now and then.

When I stayed with Grandma, she would take me on grand adventures. We would visit relatives or friends and she would show me off like I was a princess. She liked to take me to the Roseland neighborhood to go shopping and eat lunch at the lunch counter at the department store. Sometimes she took me to events at the Moose Lodge, where she was part of the women’s club and my grandpa was an officer.

Every Christmas she would take me downtown to see the windows on State Street and eat a holiday lunch at the Walnut Room. I haven’t gone to the Walnut Room since the last time we went when I was about ten years old. It just wouldn’t be the same without Grandma.

Grandma taught me two important rules of shopping: “If you buy something cheap you’ll spend more in the end when you have to replace it” and “Never pay full price, wait for the good stuff to be on sale.”

Grandma had a saying for everything and to this day I will use a little saying of hers and add, “as my Grandma used to say”. My favorite saying was: “Good, better, best, never let it rest, until your good is better and your better is best.”

She had a quirky speech mannerism that I’ve purposely adopted as I’ve gotten older: she liked to put “the” in front of stores. “I’m going to the Walgreens,” she would say. “And then I’m going to visit the sales at the Weiboldt’s.”

Grandma loved to joke around and she had a touch of whimsy. When my sister and I visited her for the last time in West Pullman before my grandparents retired to Florida she saw us looking at the mostly empty house sadly and cheered us up by teaching us to “skate” on the hardwood floors in our socks.

I didn’t see Grandma too often after their move to Florida when I was seven, but we wrote letters and talked on the phone frequently.

As soon as I started making my own money at age 16 I would save up and take the bus to see my grandparents on school breaks.

Grandma taught me how to cook and how to clean and how to hand sew, but sadly she could never get me interested in crafts. She loved crafts and would spend hours with her two daughters, my aunts, making the coolest gifts and decorations. She could do everything: sew, macrame, crochet, and craft.

Grandma gave her sister, “the nun” as all the siblings called her, a doorstopper when she and I were visiting. Grandma had made the door stopper which was a wine bottle full of sand that was covered with a dress and a doll’s head and bonnet, so it looked like a woman with a “Little House on the Prairie” dress. She lifted the dress to show her sister the wine bottle label, “Look, Blue Nun, just like you.”

Grandma also had a unique way of dealing with kids. When my sister refused to eat something because she said she didn’t like it, my Grandma would say, “You don’t like Chicago vegetables, these are Florida vegetables, they’re much better,” or “You don’t like them the way other people cook them, but you’ll like the special way I make them.” That worked like a charm.

Grandma was very religious. She went to church every week, and each night, even when she was older, she would kneel by her bed and say her prayers. She rarely swore and even when someone irritated her while driving she would say, “God bless you my child”, telling me that they needed god’s help with their driving more than they needed a curse.

My grandparents’ relationship was full of love and laughter despite all the ups and downs of their long life together. She loved to tease my Grandpa and would sometimes interrupt his stories with a joking retort like, “How come you remember every detail of what happened in 1940 and you can’t remember to take out the garbage?”

One of my favorite memories of Grandma is from Disney World.

In the early 1980s my aunt and uncle (who were also my godparents) brought me down to Florida with them and their daughter, and we met our other aunt and her family there.

The whole group of us went to Disney World and Epcot: the six adults and five kids. We’d had a great day and were all watching the nighttime parade and fireworks. Music was playing and my grandma got up and started dancing and twirling around. In that moment I saw the happy little girl she once was.

Grandma struggled with heart issues for many years. After the birth of her first child, she spent most of a year in bed, weakened and having heart issues that were never really diagnosed.

“My heart was acting weird, going really fast,” she told me about that time, “I don’t know why but it was exhausting”. She was very pragmatic about it.

I was a junior in college when my father called to tell me that my Grandma was in the hospital after a heart attack.

A couple of days later my godmother called me to break the news that Grandma was gone.

“I talked to her in the hospital,” my godmother said, “She asked me to take care of you if anything happened.”

We had Grandma’s funeral back in Chicago and we estimated the funeral procession was close to a mile long. So many friends and relatives came to celebrate her life, I have never seen anything like it in my life.

After the funeral, my aunts helped my Grandpa go through Grandma’s things. They had to carefully check every shoe and pocket of her clothing because as a child of the Depression, my grandma believed in saving for a rainy day. She saved $20 here, $100 there, all hidden in her clothing.

I had never thought my Grandma to be particularly sentimental, but my aunts also found a stack of letters and cards from me that Grandma had saved, tied up in a ribbon, and a box of broken crayons with a note that it was my first box of crayons.

It’s been over 30 years since she left us, but I still think of my Grandma almost every day. She was an original.