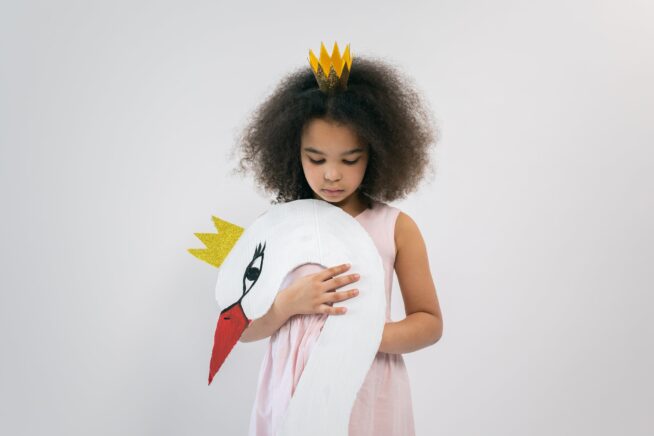 It’s not easy out there for kids who are introverts.

Strangers keep asking them prying questions. Their parents always tell them to stop being shy and sometimes complain about them to other adults. Their teachers insist that they should speak up, stand out more, and stop being so quiet.

Everyone keeps trying to change them, and most people don’t respect their need for privacy.

I used to think that was just a normal part of my life as an introvert. But becoming a dad changed my perspective on the way some kids get treated.

Accept That Some Things Can’t Be Changed

I know that all this meddling comes from a place of love and care.

Parents want to make sure their children get all the best opportunities in life. Teachers try to promote social skills and cooperation among their students. And it is true that life’s a bit easier for extroverts. Of course, people want to help kids “get over it” and become more social, more gregarious.

Introversion has a strong genetic component — our brains function slightly differently than extrovert brains do. We’re at our best in low-key, quiet settings. Crowds unnerve us, and many of us feel anxious in the spotlight.

We fare badly when we don’t get enough alone-time to recharge. The less privacy we have, the more distant and jumpy we become.

Just think back to your childhood — how often did you get to be alone without interruptions? You were always surrounded by kids at daycare and later at school. Adults often interrupted you and demanded your attention, whatever you were trying to do.

It’s not surprising that introverted kids are under strain, and that makes them reclusive. This is the way they’re built, and it’s not something they can turn off like a switch. They can’t “stop worrying about others” or “just have fun” in crowds.

You’re basically telling them to change their nature. And that means setting them up for failure.

This behavior from adults explains why many introverts develop bad habits in childhood. Unlike introversion itself, these are preventable.

How do kids react to feeling like they’ve disappointed a parent or other authority figure?

The outlooks and behaviors developed in childhood haunt us all our lives. Some people unlearn them when they grow up, others never do.

If you’re a parent, there’s plenty you can do to help your introverted child. Instead of showering them with generic advice, try the following:

1. Make sure the kid has some personal space.

I’m not saying your child has to have a room of their own — I know that’s not always possible, and there are some benefits to siblings sharing a room anyway.

Nonetheless, kids need spaces where they can be alone and mostly uninterrupted.

Let them read or draw in peace — or if they’re older, computer games (in moderation) can be a fine way to decompress too. If you have to interrupt them, give them some time to redirect their attention to you.

Try to avoid rushing them, and don’t lose patience if they need a few minutes to “tune in”.

2. Don’t make a big deal out of social events.

From a very young age, kids mirror their parents’ behavior in distressing situations. If a toddler bumps her head and you tell her it’s no big deal, she’ll laugh it off with you. If you fuss and panic, the kid panics too.

The same applies to family get-togethers, public speaking events, group projects, and so on. Treat it as a natural, casual part of life. If it’s important, don’t let them get out of it but don’t berate them for asking.

You can tell them it’ll be easier next time. They might not believe you, but it’s true.

3. Stop labeling them as shy, quiet, or unsociable.

Everything you say about your kid sticks to his or her psyche. You’ll forget it by tomorrow, but your kid may carry it forever.

So don’t call them shy — in fact, it’s best to avoid labels in general. Kids box themselves into categories because they want to match their parents’ perceptions. They try so hard to be “the clever one”, “the quiet type”, or even “a little troublemaker”. Remember that their personality is in flux and it’s best not to generalize.

Also, avoid talking about them when they’re in the room. Kids always find that annoying, and why shouldn’t they? If it’s rude to do it to an adult, don’t do it to your child either.

4. Don’t meddle in how your kid chooses to have fun.

Let’s say your child is spending time at a playground, making castles in the sand, keenly observing others at play, exploring new ways to use a stick as a prop. They may look lonely, but odds are they’re happy as a clam.

Introverted kids typically have a vivid imagination. They get lost in the stories they tell themselves. They’re also curious about the world — they just prefer to watch before they join in.

In small groups, introverts can be dazzling. But it’s important to let them form these groups by themselves. Any meddling from you will embarrass them. Or worse, they’ll become dependent on you as their social manager. Even if it takes some time and trial-and-error, they have to develop these skills for themselves.

5. Give them unconditional love.

Most introverted kids forge a few close friendships that mean a lot to them… but some remain loners until their teens or even beyond.

Either way, your main job is to love them. If they know they can rely on you as background support, they’ll maintain some confidence and unfurl their wings when they’re ready. That can’t happen if you’re judgmental or disappointed in them.

This Is One of Many Things You Can’t Control

Parenting is terrifying. I often get the urge to shield my kids from every hardship: I want their childhood and teenhood to be happy, and I also want them to be successful, resilient adults.

But the tough truth is that there’s not much my wife and I can do about that. We can’t ensure their happiness or success. All we can do is love them.

Whether your child is an introvert or an extrovert, they’ll have to find their own path in life. As scary as it is, you have to let them. Don’t waste time worrying or nagging them — instead, enjoy them just as they are. If you keep trying to change them, you’ll miss out on the pleasure of watching them grow as individuals.