Are You Being Emotionally Manipulated? 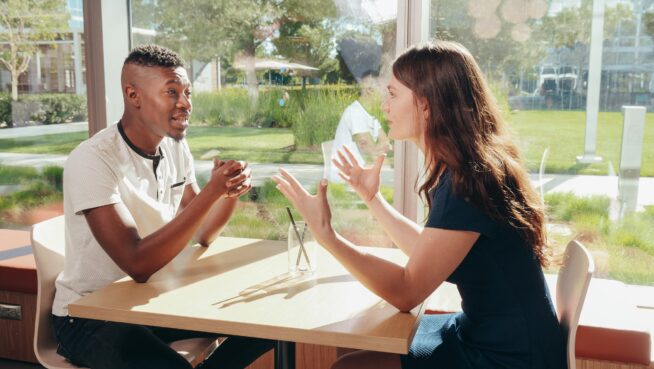 Everybody is manipulative to some degree.

We use manipulation or influence because we are social beings. But for some people, like narcissists, manipulation is a way of living.

Say there’s a friend in your social circle who is singling you out, treating you differently than they treat the others. They apparently like everything you say or do. Are they trying to love bomb you? Or are they just awkward and enthusiastic?

You can drive yourself crazy trying to figure out what their true intentions are.

Self-reflection is more productive than endlessly analyzing another person’s behavior. If someone is manipulating you, that causes changes in your life. Let’s talk about some of them.

One of the best ways to identify a manipulator is that everything about them is intense.

Compared to other people you hang out with, manipulators have a strong impact on your mood. It’s not always a negative impact. In fact, you may start thinking they’re the only person in the world who can cheer you up.

But you can’t trust them to do that consistently. They can make you feel on top of your game — and then tear you down a few minutes later. There’s never a comfortable middle ground when you’re around them.

Another telltale sign is preemptive exhaustion. You realize you’re going to be meeting up with them, and you sigh, feeling drained in advance.

Things get really tiring really fast if you disagree with a manipulative person, so it’s easier to just let them have their way. Some manipulators get a thrill out of something as simple as convincing you to order a meal you don’t like. And all their little victories add up to make you feel tired of life.

Note that they don’t always pick fights. Some of them prefer to discuss everything in detail, claiming to look for “the most rational solution”, and they maintain a steady tone throughout. If you get irritated or bored, you feel like the flaw lies with you. Who doesn’t like rationality?

3. You feel guilty all the time.

Guilt is a corrosive force, and manipulators are great at using it to their advantage. They gradually change the way you view yourself, little mistakes you make start feeling like huge personality flaws. Any disagreement becomes proof of your callousness or lack of care.

Not that the manipulator is likely to say so outright — they’ll just insinuate that something is wrong with your taste, your judgment, your friends, your ability to resolve conflicts, and so on.

People with high levels of empathy are easily manipulated. If you want to be kind and reach a compromise, you’ll get browbeaten into agreeing with the manipulator.

4. You think you’re insane, oversensitive, or “too tired to think straight”.

The internet likes to overuse the concept of gaslighting. It’s not about two people having different perspectives on a topic, and it means more than just a lie.

Gaslighting is meant to make you think you’re irrational. If it goes on long enough, you give up: you end up agreeing that the other person knows best.

But it often starts with little things. A manipulator may tell you you’re misremembering something you’ve experienced, or they talk about how forgetful you are. Or maybe it’s your judgment that they like to question. For example, they’ll imply that you don’t understand social situations, that you’re too naive or too cynical.

This may be veiled in a joke or an expression of concern. It’s the first step of a long process that is meant to destabilize your sense of self.

5. You keep second-guessing everything you do.

This is a gentler version of the above.

You don’t necessarily think there’s something fundamentally wrong with you. It just takes you longer than usual to make decisions. You often wonder if you should have done something differently.

This kind of indecisiveness can be the result of various factors — exhaustion, depression, bad past experiences, lack of sleep, and so on. But sometimes, the root cause is that someone is messing with your mind.

Personally, the worst manipulation I’ve been subjected to happened in the form of compliments. The manipulator flattered my ego, made me feel like I was inherently better than the others. At the same time, the seeds of doubt were there. I wanted to live up to this glossy image of me, but I knew it was fake. I gradually became self-conscious, and every decision became agonizing.

The red flags aren’t very subtle, but the thing is…

… manipulators are much harder to spot if they’re close to you.

If you notice bad behavior in a family member or partner, you may think “eh, that’s just how they are”. You can’t see any changes in yourself because they sank their claws into you a long time ago.

But as hard as it is, it’s always useful to look at your relationships with an objective eye. Is there someone in your life who is making you feel tired, guilty, anxious, or like you’re not good enough? If so, it might be time to take your distance.