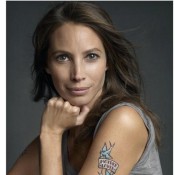 With more than twenty-five years at the forefront of the fashion industry, having graced every magazine cover from Vogue to Time, Christy Turlington Burns has established a diverse career as a model, writer, entrepreneur, spokesperson, advocate and now filmmaker. Philanthropy and service have long been a part of Christy's personal and professional mission to make a lasting impact on the world. As the daughter of a Central American mother, she felt compelled to support efforts to rebuild post-war El Salvador in the early 1990's. After losing her father to lung cancer in 1997, Christy’s activism shifted to preventative healthcare, more specifically smoking prevention and cessation. Christy collaborated on several public health service campaigns and in 2002 launched an award-winning website, smokingisugly.com.

Christy founded two successful lifestyle brands; SUNDÃRI, an Ayurvedic skincare line and nuala, a yoga inspired apparel and accessories line. During that time, Christy also merged her love of yoga and writing to author her first book, Living Yoga: Creating A Life Practice (Hyperion 2002). Christy has contributed writings to Marie Claire Magazine, Yoga Journal and Teen Vogue along with contributions to the Huffington Post, Canada’s Globe and Mail and the UK’s Evening Standard. She has also contributed to NBC’s Today Show as a guest correspondent, which included reporting on the status of girl’s education in Afghanistan in early 2002 and an interview with H.H. The Dalai Lama at his home in Dharamsala, India.

In 2005, she began working with the international humanitarian organization CARE and has since become their Advocate for Maternal Health. She has also been an Ambassador for (RED) since their launch in 2006. Her work on behalf of CARE and (RED) inspired her to pursue a Masters in Public Health at Columbia University’s Mailman School where she is currently a student.

In 2008, Christy began working on a documentary film profiling the status of maternal health worldwide. In her gripping directorial debut, Christy shares the powerful stories of at-risk pregnant women in four parts of the world, including a remote Maasai tribe in Tanzania, a slum of Bangladesh, a post-abortion care war in Guatemala, and a prenatal clinic in the United States. NO WOMAN, NO CRY made its world premiere at the 2010 Tribeca Film Festival in New York City and the US television broadcast premiere on the Oprah Winfrey Network (OWN) on May 7, 2011. Concurrent with the debut of her documentary, Christy launched Every Mother Counts, an advocacy and mobilization campaign to increase education and support for maternal and child health. Every Mother Counts seeks to engage new audiences to better understand the challenges and the solutions while encouraging them to take action to improve the lives of girls and women worldwide. The keystone of the campaign is everymothercounts.org, an interactive platform providing the tools to raise awareness, education and action.