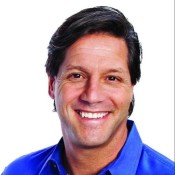 John Assaraf is an International Speaker, New York Times bestselling Author of The Answer and Having It All.  He is a Lecturer, Consultant and Consummate Entrepreneur.

His expertise for achieving the psychology for success has landed him guest appearances on Larry King Live, Anderson Cooper 360, The Donny Deutch Show, The Ellen DeGeneres Show and numerous radio and print media, worldwide.

He has consulted for Hollywood Stars, Politicians and CEO's worldwide on achieving life and business success.

John is of the featured experts in the smash hit movie “The Secret” which his company helped launch into a worldwide phenomenon and he appeared in the PBS special “Quest for Success” with the Dali Lama and Richard Branson.

In the past 25 years, he has grown five multimillion dollar companies including a 100 office  Re/Max real estate operation and a highly successful IPO on NASDAQ with online virtual tour provider Bamboo.com.