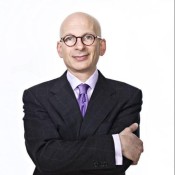 SETH GODIN has written fourteen books that have been translated into more than thirty languages. Every one has been a bestseller. He writes about the post-industrial revolution, the way ideas spread, marketing, quitting, leadership and most of all, changing everything. American Way Magazine calls him, "America's Greatest Marketer," and his blog is perhaps the most popular in the world written by a single individual. His recent Kickstarter for his newest book, The Icarus Deception, broke records for its size and the speed that it reached its goal. As an entrepreneur, he has founded dozens of companies, most of which failed. Yoyodyne, his first internet company, was funded by Flatiron and Softbank and acquired by Yahoo! in 1998. It pioneered the use of ethical direct mail online, something Seth calls Permission Marketing. He was VP of Direct Marketing at Yahoo! for a year. His latest company, Squidoo.com, is ranked among the top 125 sites in the US (by traffic) by Quantcast. It allows anyone (even you) to build a page about any topic you're passionate about. The site raises money for charity and pays royalties to its million plus members.
Working