An Artist, a Surfing Rabbi, and Tragedy to Triumph [PHOTO BLOG] 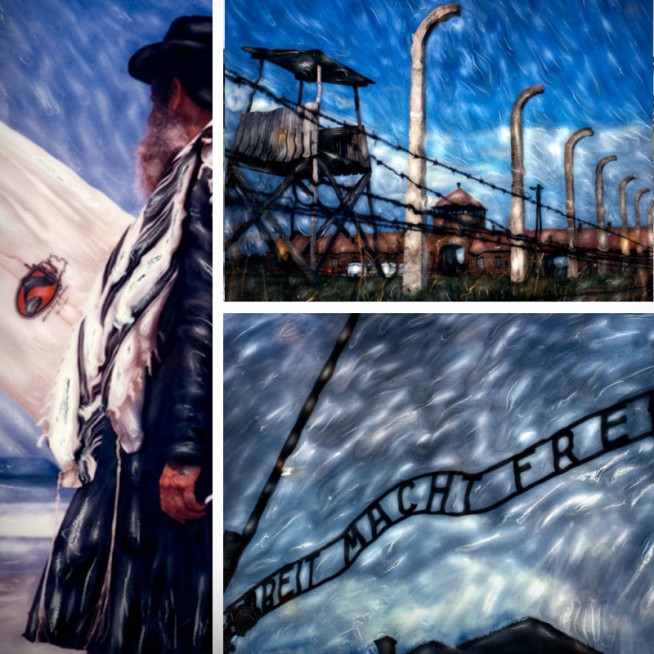 I had seen movies and heard several stories about the holocaust. I knew it was tragic and I had met people who had survived it. But I never really got it until I visited Auschwitz-Birkenau where two million people were murdered. I got it that day. It was the most haunting experience of my life. I saw barracks with thousands of pounds of women’s hair that was shaved before they were put through the gas chambers, and the endless tortures documented on this massive plantation used to murder human beings. I was searching within the ashes to find that one little flower that was growing and that’s what I was going to focus on and make art of. There were no flowers, not there, and my heart broke in a way that I could have never imagined and I awakened to an incomprehensible reality I did not know existed—until that day.

I was at a loss for how to process what I had taken in. It was waytoo much. When I returned home to Los Angeles, I contacted a surfing Hasidic rabbi I had heard about. We decided to go to the beach and make art. Our trip yielded the surreal “Perseverance—Portrait of a Surfing Rabbi” which depicts a grey-bearded rabbi in long black coat, prayer shawl, and fedora, carrying a surfboard under blue skies gazing out to sea.

What I love about this work of art so much is that it is the biggest, most hopeful, warmest, feel-good scenario I could have ever imagined—and it’s our reality, filled with a sea of “flowers.”

Arbeit Macht Frei—Work Will Set You Free
The Entrance to Auschwitz.

Perseverance: Portrait of a Surfing Rabbi in Southern California

The powerful images of mixed-media artist Robert Sturman have a vivid presence that is both other-worldly and deeply rooted in the earthly wonders he has explored so adventurously in his global travels. A spiritual journeyer as well, Sturman is an intuitive creator whose works resonate with an inner vision as much as they reach out to embrace the viewer with tactile, richly hued physicality. The official visual artist of 2005’s 47th Annual GRAMMY® Awards, Sturman has formal training as a painter and photographer, and holds a Bachelor of Arts from the University of California, Santa Cruz. For more on Robert and his art please visit him on Facebook or his website.