Who’s Going to Want Me? 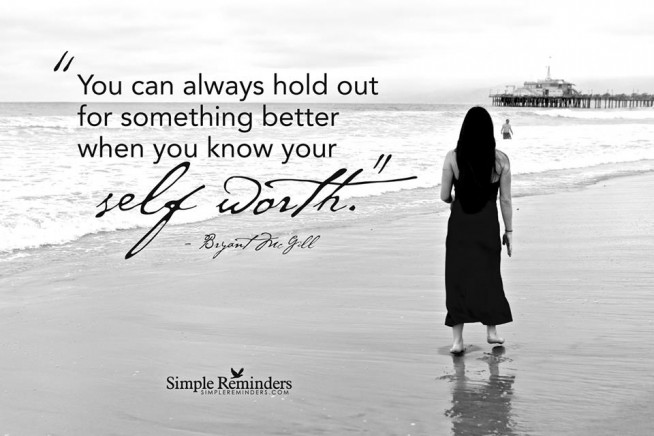 Who’s going to want me?

So much of it all boils down to that, doesn’t it?

Now that I am: Fatherless. Fat. An orphan. Old. Broken. Divorced. Handicapped. Widowed. Left. No Longer Have Perky Tits. Deaf. An Amputee. An Atheist. Sober. An Alcoholic. Lonely. Honest. Motherless. Childless. With Children. Ugly. Bald. Go ahead, put your word in.

You may wake up one day at 5:33 in the morning and shoot up out of bed as if from a nightmare where your car was flying off a cliff, and you may find yourself once again muttering those words. Who’s going to want me now that I’m dead?

You’re not dead though. You woke from the dream. See, you are sitting right here; your head matted with sweat; the back of your neck hot and cold at the same time, and you are reading these words and nodding along, and you are very much alive.

There’s this line from my favorite Robert Lowell poem, “Night Sweat.” The last line of the poem:

“If I cannot clear the surface of these troubled waters here,

absolve me, help me, Dear Heart, as you bear

this world’s dead weight and cycle on your back”

He wrote about having nothing to write about—a variation on the good old Who will want me is Who will read me.

How much dead weight we carry. Look how much.

My friend Steve Bridges died last year. His sweet little maid found him on his couch, like he’d fallen asleep watching television. She tried to cover him with a blanket at first, until she realized what the reality was. I don’t ever wish that I’d been her that morning, covering Mr. Steve with a Mexican blanket only to realize that, no matter, he’d always stay cold.

She’d worked for him for years. They would sit in his kitchen while she cleaned, and he wrote and laughed, and she laughed, and she loved him. So, when she realized he wasn’t sleeping but dead, her sweet little heart must have stopped, and I would wager a bet it has been beating a little differently since that morning. Perhaps that thought came rushing at her one morning in her own bed—Who’s going to want me now? Who will make me laugh in his kitchen?

When he died, I kept teaching my yoga classes, but I would have to turn around so that my back faced the class. I would cry and then wipe the tears and tell them to take a vinyasa or do child’s pose. Sometimes, I just let the tears fall because, the truth of the matter is, the people who take my class know who I am; they know how I applaud honesty. They expected nothing less than for me to take him right into class with me that week, and they commended me for my willingness to show them my suffering and heartache, because they had felt it too, and sometimes we actually need to remember that feeling, that raw my gut is ripped out feeling so we wake up.

We all woke up that week or two after he died.

Steve and I hadn’t known each other terribly long. Oh, but we had. (Isn’t that such a yoga teachery thing to say?) We had known each other our whole lives, so when we met, it was not a thing. He started coming on my retreats, and I referred to him as my brother, and he referred to me as his teacher, his agent, his sister, his friend. We loved each other; we did. With Steve, I never felt the ghost of Who’s going to want me now.

Yes, I am married, but it is beyond that. It is such a cellular level instinct that it goes way behind the logical, the rational, the explainable, all the way to the center of the Earth where it pierces and shrieks.

He listened to me. He saw me in a way few others have ever seen me. When he died, that shriek howled from the depths of the world and knocked me over, right in the middle of the street. It was impossible. Impossible that he was dead. I tried crawling my way through the dirt and mud toward that sound coming from below, but I was stuck, reeling from the explosion. I was stuck. I couldn’t get him back.

Before he died, the last conversation we had, actually, was in Mexico. It was the last day of my retreat, and we sat eye to eye as everyone else took pictures of themselves doing various yoga poses below on the beach. He told me that he wanted a family. He said something to the effect of, “I can’t leave the earth without having a child.” In the movie version, I will insert some foreboding music there so we know it’s foreshadowing and that he will never ever have a child. We should know this when the music plays and the two people sit eye to eye above a Mexican beach as happy as they’ve ever been with such a knowing that the Who’s Going to Want Me Now is so far in the past, because, to have found a tribe like this, nothing could ever go wrong, all was good in the world. All was safe.

I didn’t get over his death, but I kept going. It’s what we do. Someone dies, and you keep going.

That is Choice A. Choice B is you die. I did not die nor did I want to, so I kept going. Eventually, I felt a little less sad because Time, that ruthless beast, does that.

It softens you in some places and, at the same time, ages you and hardens you, but mostly, it dulls the pain. Believe me on this.

If we remembered all our visits to the dentists and all our heartbreaks with clarity, we would have rotting mouths, and we’d all be alone in our rooms watching The Bachelor.

This morning, I popped up at 5:33. I am on England time, so it is eight hours ahead. I popped up, and Who’s going to want me now clamored me over the top of the head. I was reading an article in The New York Times about a George Saunder’s book. He is fifty-four and started publishing at thirty-seven. I thought: Oh, ok, good. I’m ok. I am around that age.

I have not published anything yet. No books, no short stories, no articles. I am Saunders age when he wrote his first book, and what have I done so far? I have been a waitress for decades and now a yoga teacher and, here it is, drumroll, it’s coming: Who Is Going To Want Me Now?

I am not looking for advice. I am talking about a deep guttural voice with a trajectory to nowhere that I have to conquer on my own, like I am in a battle zone. And I am. With my life.

I do not know who will want me. I can let that stop me and not write my book and not try to publish it, or I can write it and have a deep knowing that someone will take it, and if they don’t, they don’t. I will then keep going. I will not use it as some sort of empirical proof to say See? See? No one wants me.

Every time someone has left me (there’ve been two major ones), I have questioned who would ever want me again, as if they were the only two men on the planet and I was an untouchable.

Someone did want me. Many did. Not just men and not just sexual. You are reading my words. You want me. But screw all that. Here’s the kick in the pants I was talking about the other day: I want me.

Most days. Most days, I want me, and from there I go. I go from there, armed with my self-love and my husband and my Tribe and my indefatigable urge to write, write, write.

Then there are days, like today, where I wake up and my heart has fallen out and rolled somewhere under the bed next to some old birthday cards and a shoe. I have to crawl around in the dark and move through some dust, but I find it and screw it back in. It happens. It’s bound to do that once in a while because there is some ancient agreement I must have signed long ago before I knew I was signing it. I ripped up the agreement, but there are days when the memory of the signature is strong enough to stop me in my tracks and have me say to myself Just Who Do You Think You Are?

Finally, I am getting to the point.

Who do you think you are? Go back to your blanks. Fat, Legless, Manless, Childless, No Longer Young.

Whatever it was you signed to on that contract, I want you to scribble it out. Get a black magic marker or some other stinky kind of pen and scribble it out at least a hundred times. Then, leave it blank.

You think thirty-eight years old sums you up? You think divorced says it all?

You can’t define yourself in a word. You are a world, Dear Heart.

I’d love to hear below just who you think you are. Be brave. Own it.