What Fills Your Emptiness? 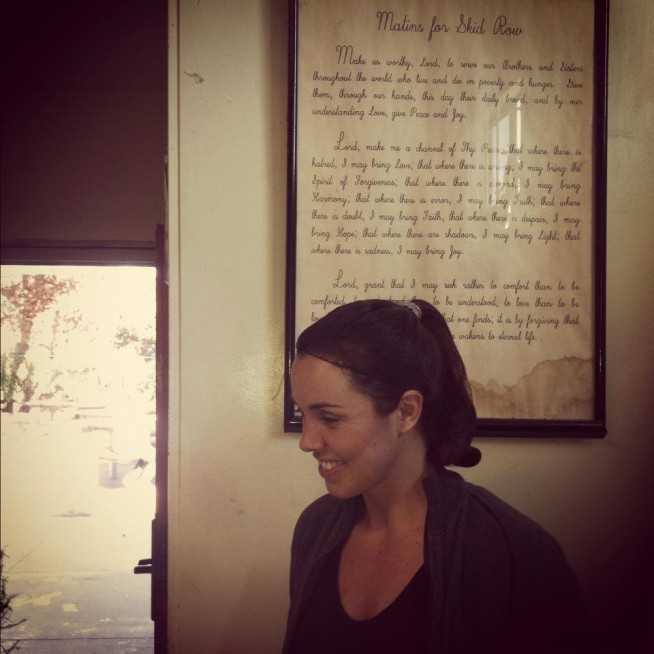 At seven o’clock in the morning, I sat in my car gathering the courage to get out. I watched as the residents of Skid Row folded up their tents and gathered their sleeping bags—a whole makeshift city inside a city. Many people lurched as they walked, reminding me of the scenes from zombie movies.

I stepped out of the car with my keys clenched in my fist. I crossed the street at an intersection where, a few hours later, a homeless woman would be discovered dead on the pavement. I finally asked directions and was pointed toward The Hippie Kitchen.

Inside, I found exactly what I had expected: mounds of day-old donations needing to be turned into lunch and a sense of in-the-trenches fellowship found in places where volunteers work day in and day out in a never ending battle of social justice.

The whole place reminded me of my own hippie, Catholic grandparents.

When the lady struggling to butter the bread because her hands shook so much asked me why I’d joined their ranks, I told her about my Papi. I told her about his death and his life. Watching her, I was struck by how many excuses she had to stay home. Surely, she has done her service, but, still, she came. She was not afraid, even though she could hardly shuffle, to walk the streets of the homeless capital of the world.

When the gates opened, we served the guest food, music, and laughter. Some mumbled angry nonsense while others gave blessings. “Everyone is beautiful in their own way,” the director of the kitchen sang. I realized it was true—the frosted blue eyes of the blind, the boy with death-count tears tattooed on his cheeks, and the woman with five grey braids.

While cleaning up, one of the leaders pressed a newsletter into my hands. Inside was a story about beggars. There was a quote by Thomas Merton saying: “the beggar is the bearer of the empty place. The wealth of the group touches his bowl at all sides. The gift gathers there, and the beggar gives it away when he meets someone who is empty.” We all are the beggars and the givers.

In a world so intent on telling us we need more to be complete, we forget how much we have to give. We are so focused on what we perceive to be our empty spaces that we ignore the gathering gifts getting stuck inside us.

Walking back to my car, I was afraid of only one thing—forgetting.

Like hunger, our thoughts need regular attention. After the meal, the guests emptied back out onto the streets. One meal will not save them. One encounter will not change me. But a steady diet, one meal given again and again, will. “What do we have today?” one homeless women asked. “Whatever God gave us,” a volunteer replied. She smiled and chanted the wisdom over and over again, shaking her head in wonder.

What do you have today? Hold out your bowl that it may be filled, so that you, sweet beggar, can take joy in giving your gifts away. And may peace always be with you.

Danielle Orner is a writer, actress, motivational speaker, yogi, vegan, cancer survivor, and amputee. Diagnosed with bone cancer at age fifteen, she spent a decade getting scans, surgeries, and chemotherapy treatments. Three years ago, she decided to take an active role in her health researching anti-cancer lifestyles. Currently, she is cancer-free. She doesn’t wait for the six-month scan to tell her she can start living. She’s too busy making impossible things possible. To learn more about Danielle, follow her on Twitter, Facebook, and YouTube.