How To Be A Voyeur 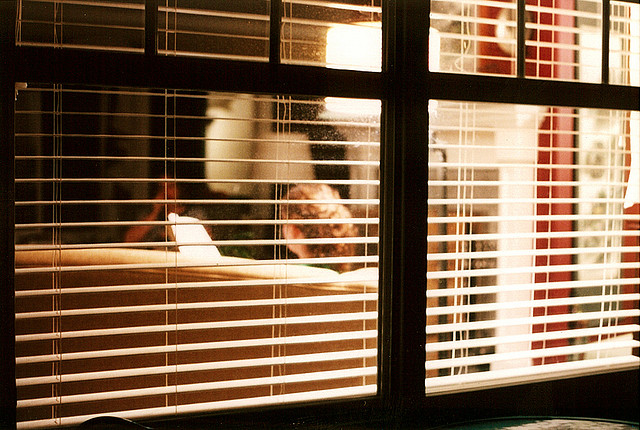 When a couple was going to have sex they would beep my friend (this was in the days of beepers.)

He was working with about ten couples. Then he would go over to their house, let himself in, and photograph them using a special camera that worked well in the dark. Then he would leave.

He put together a collection of the photographs of all the couples in intimate positions.

At the end of the book he also had photographs of all the couples just standing and looking at the camera, fully clothed. The book is called, “Tenderness.”

When the couples were having sex, they looked beautiful. It seemed as if the photographs were of the most beautiful people in the world having sex.

When the couples were just standing they looked totally ordinary. Like anyone you would see in the street.

It was fascinating to see the difference between the intimate photos and the same people in “ordinary” photos.

My friend was a voyeur. His readers were all voyeurs.

Much later, he and his brother made what I consider the first quality Reality TV – Taxicab Confessions on HBO.

People in cabs would be videotaped without them realizing it. If you ever watched it (making you a voyeur), the last episode of the first show is one of my favorite scenes on TV ever.

I don’t know why – but voyeurism is pleasurable. TV and reading are substitutes for it. We peek into other people’s lives and get pleasure, even if it’s just fiction. Gossip magazines are a version of voyeurism.

One step further is reading other people’s emails. Another step is peeking into their window. The more direct the voyeurism is, the more illegal.

Voyeurism is money. Facebook is built entirely on a platform of Permission Voyeurism.

Match.com, even if you are not single, is one of the most trafficked websites ever. People don’t spend just one minute on it. They spend an average of a half hour on it, viewing all of the profiles. Again – permission voyeurism.

Maybe Google also. How many times a day do you search an ex-partner. Or someone you no longer speak to but you want to know what is happening in her life. Or even googling yourself. To voyeuristically peek at yourself the way others might see you.

Google is like a shovel you use to dig underground where the secrets are.

There’s three ways to make money (and have fun) via voyeurism:

A) Build something that let’s people peek into the lives of many others. For instance, Facebook. Or more recently, the app, Secret, that has been making the rounds.

B) Build something that is entertaining. That lets you peak into the lives of others even if those lives are fictional. Books, TV shows, any kind of story telling.

C) Be an exhibitionist. I’m not saying this in a bad way. Don’t take off your clothes and run through a stadium (but if you do, I’ll watch.)

But take a part of your life and share it with others. Sharing your life with others is a great thing. It lets people know that their own horror story of a life is not so unusual.

We’ve all been picked on. We’ve all started something and failed. We’ve all disappointed each other. We’ve all done the worst things imaginable and are ashamed of it.

Or at least I have. I hope other people have or I’ve been making a giant fool of myself (which is certainly possible.)

Every piece of art you make is not about other people.

It’s about you taking a sharp knife and slicing off a painful piece of your life, and giftwrapping it in a creative way for others to see.

All of the art in the world is really that simple. It’s not about others. It’s about you.

Showing a piece of yourself is a great gift you can give to others. @jaltucher (Click to Tweet!)

It also gives permission (“if he failed and is not ashamed about it and learned how to use it to turn himself around, then maybe I can also.”)

Take a map and highlight all the stories that happened to you in each place on the map.

It can be a real map of the world or a metaphorical map (with locations for fears, loves, hates, successes, and all the roads between the different “locations.”)

Gurus who give advice from their pedestals are scams. Fools who share are wise. I’m a fool. And every day I get more and more emails telling me what a fool I am. Those are badges of success for me.

There are many side effects:

Pleasure is a side effect. When you create and share, the nerve cells in your body release a highly addictive and pleasurable neurochemical called dopamine. The same drug that is released when having sex. Or when snorting cocaine.

Dopamine is also contagious. It jumps from body to body once released.

And you get to experience it just by sharing something from your life in a creative way.

Money is another side effect. Friendships are another (people like to bond with people who share. Secrets are often the currency of friendship.)

Don’t be afraid of what comes out of you. If you blend the magic world inside of you with the “real world” outside then you will learn to live in a hybrid world where magic and real come together.

Having this luck is the greatest thing to ever happen to me.

Ugliness is keeping it all bottled up. Keeping every part of yourself hidden out of fear. Wearing the masks of shame and insecurity.

Hoarding your past, present, and future so nobody will ever see the angels and demons bottled inside.

And when you die, that’s the only way to disappear forever. My theory is that hoarding until death is what creates all the dark matter that makes up 99% of the universe.

Don’t be dark matter. Let people see your light. Let your life be fireworks and explosions.

So I can watch.

(Photo by Isaac B Watson)