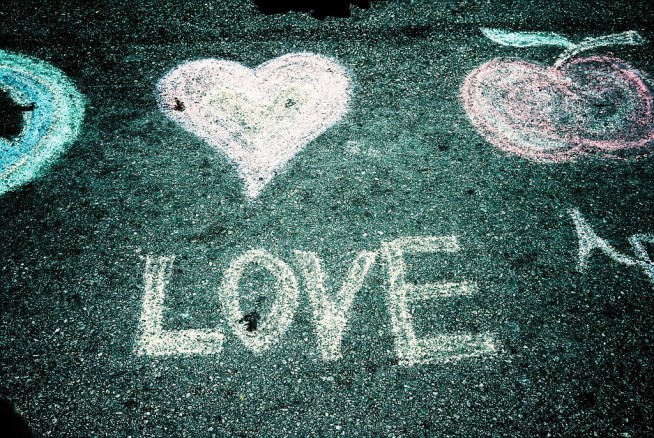 Yes, it’s time. Time to stop resisting. Time now for me to write about awakening to the wellspring of love, because more importantly I know that it never could have happened had I not awakened to myself first.

I often talk about honoring the space between no longer and not yet, for it’s in this liminal space that resiliency and resourcefulness are born.

I spent much of last year self-resourcing. And finding resiliency in self-love.

On February 25, 2014 – my forty-ninth birthday – the man I had been seeing and I decided to part. We left each other, though still very much in love, because we wanted different things.

Eight years younger than I and never married, he longed for a partner and playmate to share life with. And I, having left an enmeshed co-dependent marriage, was a workaholic, happily entrenched in my career and on the road for long stretches at a time. The truth is that I was either working or recovering.

Love and play felt like items on my to-do list. Yet I believed I could juggle it all and give myself fully to everything. That belief ultimately stretched our relationship to its breaking point and sent me into eight months of solid certainty that it’s far easier to be alone.

Over that summer, friends of mine got married and their wedding was like the one at the end of every romantic movie, times a billion. The gorgeous, joyous and madly-in-love couple exchanged vows, pledging their hearts and souls to one another before friends and family against the backdrop of sunshine and waterfront. It was magnificent. Really and truly. And yet as I sat there watching, it was so crystal clear to me that I didn’t want what they were having.

Why on earth would I want that? I had no one to answer to and no one to take into account for decisions I was making. I was free from the obligation of relationship. And I could work as much as I wanted to! It was sheer bliss.

I started to long for fun and play: for full moons, camping, road trips, mountain biking, and the yummy love that my guy infused our relationship with.

These are things at one time I resisted for fear they would threaten my work. This wasn’t about being lonely or wanting a boyfriend. It was about wanting him. Wanting us.

When my guy and I split he helped me load up all the stuff that was at his place in Aspen so I could drive everything back to my place in Boulder. He even packed me a spare head for the electric toothbrushes we have.

Remember, we left each other in love.

Nearly eight months had passed without any communication. He made that request and I was determined to honor it.

Historically, I’ve been really good at restrictive, righteous self control and less good at following my heart.

And then, one sunny Saturday in October, I took a risk.

Over the past few years along the journey to finding my own truth, my own voice, and my own power, I’ve learned that when we stay inside the lines too rigidly, we stop the flow of allowing.

Sometimes we need to burst the dam and let the pent-up energy move so that new possibilities and options can emerge where before there was only stagnant, lifeless water.

Years to know that my life was my own and that I didn’t owe it to anyone. Years to get free from believing the only way to be loved is by buying it, bending over backwards with people pleasing.

Years to know that everything we are seeking externally needs to be resolved internally first. Years to live life from my own inspiration, motivation, and agency rather than in response or reaction to anyone or anything else. Years to know that our present moment choices can actually predict our future and that every choice we make today is either in service of the life we desire living, or sabotaging it. Years to know that the answer to freedom is self-love, self-acceptance, and self-forgiveness.

I took a risk and followed my heart. I was so worried about breaking a boundary that I almost didn’t.

Here’s some of what I emailed:

i want to relinquish

and let you know

i miss you in my life

i love you always

i am in love with you still

Here’s some of what he wrote back: thank you for reaching out. i appreciate the risk you took in doing so. after writing and rewriting you for the past two hours, i don’t know what to say. it feels good to hear from you. i am crying.

Turns out, as fate would have it, he was in Boulder that weekend.

Two days later we met for a walk and sat on a rock in the creek for four hours. It was as if everything and nothing had changed.

We have been together ever since.

We put closure on the past so that we can do it differently now.

It’s a tall order. Building on the good, facing fear, and allowing for expansion and possibility. To be independent and entwined, each successful in whatever way that means. To be all in this loving relationship where we speak our truth and where we don’t get threatened or lose ourselves in love.

It’s a tall order, I know, but day by day we’re doing it.

I no longer have one foot out the door. I’ve shifted the belief that being in a relationship and being successful in my career are mutually exclusive. We’re just wrapping up a six-week stint in Moab, Utah, where I’ve made mountain biking my priority while also devoting myself to my coaching business, and my relationship – everything is thriving.

I will always love my work but I have a reverence for play now too, appreciating the ebb and flow of how one feeds the other.

And still, the bud of self-love that awakened in me blooms big, making me more and more positive that while life might indeed be easier when alone, it’s much more fun when shared.

i feel your heart

when i am submerged

in love with you

Nancy Levin, bestselling author of Jump … And Your Life Will Appear and Writing For My Life, is a Certified Integrative Coach through The Ford Institute For Transformational Training. Since 2002, she’s been the Event Director at Hay House, Inc. producing experiential events and innovative conferences, focusing on self-empowerment, health and spirituality, while weaving in her own story and poems to connect with audiences around the world during keynotes, workshops and seminars. When she’s not on an airplane, Nancy lives in Boulder, Colorado where she received her MFA from Naropa University. You can visit her online at www.nancylevin.com and follow her on Twitter or Facebook.