Have You Lost Your Crown? (From Slave Girl to Queen) 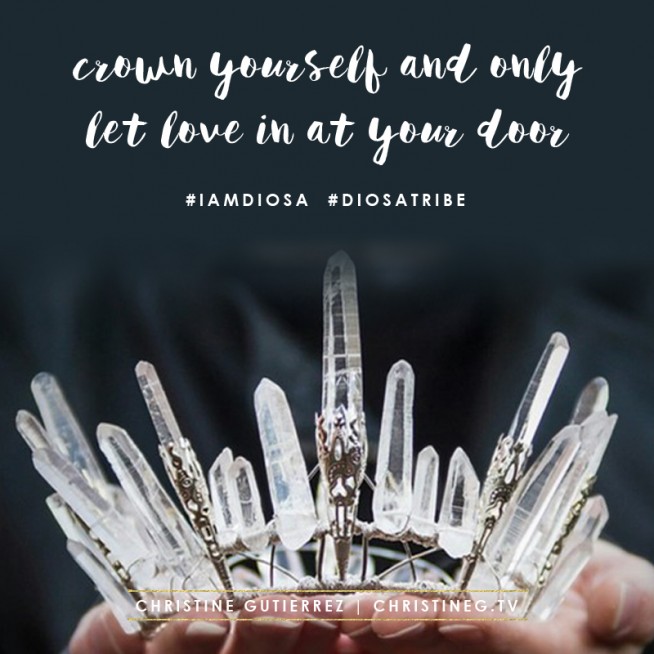 I was in my early 20’s and I found myself on my knees begging him to come back to me. Let me be specific though…

I found myself on my knees begging for my abuser to come back to me.

I had just spoke to the woman that he cheated on me with. I called her on the phone, and she told me the painful details of their secret relationship. She told me how she would drive his car and pick him up from the school we went to together and how he would take her shopping. I was heartbroken. However, even in that moment I had some other worldly strength come through me so that I wasn’t angry at her. The words poured out of me… “It is not your fault, you dishonored yourself as you dishonored me. But the true fault, is his. It is his fault, because it was him who gave me his word.”

Even in that moment of heart-ache something knew that displacing my anger on her wouldn’t help. It was ME I was angry with for allowing myself to choose a man like him. It was him I was angry with for breaking his bond to me. She was actually a gift, for me to SEE the levels of disrespect and dysfunction.

But back to my story… He cheated on me, and my response was to rationalize and forgive him before I could even process the pain. My response wasn’t anger towards him, it was how could I get this to go away so I could get him to love me again. I couldn’t bear to feel the agony of the truth. I wasn’t ready to hear the truth. My insides were scrunching tight. I was broken in a million pieces and I had convinced myself that he was the glue. With each word I mustered to him, I lost a part of me. “Please… how could you do this?… do you love me?… did you mean it? …tell me you didn’t mean it….will you do it again? Promise you won’t .. promise me. please.”

I felt ME disappearing. I felt ME deteriorating. I was losing myself to this sickness. I was drowning.

He had called me every name in the book at this point. “You stupid wh*re.” “You sl*t.” “B*tch, attention seeking sl*t.” and I stayed. His cheating was the icing on the cake. It was as if the more he hurt me the more I believed I was unworthy and the more I wanted to stay to beg to see if I could find my WORTH somewhere inside of him. I didn’t know my worth was within me. I believed my worth was in his words, his actions, his respect or disrespect for me. I based MY WORTH ON HIS, and that was a toxic and dangerous game because he didn’t love himself at all.

Hurt people … he sure hurt me and I had sure hurt me. I was carrying the pains of the wounds of my family abuse and trauma and I secretly hoped that by replaying this sadly similar saga that I would heal my childhood wounds. Clearly, that was a flawed plan.

The bright light that I was slowly started to fade. I felt dim and heavy. I remember writing a poem saying “My colors are now gone. I am grey.” The world began to feel small. My life had become consumed with one thing: my pursuit and addiction to get my worth back from him.

I was in pain. I was in agony and I knew I wanted out but I lacked the strength to do it. But amidst the sorrow and the darkness, I heard a tiny and faint voice within say, “This isn’t good, eventually you need to leave.”

It was that soul whisper that led me out.

It wasn’t an easy out, I can’t give you that inspirational quick turnaround story – I apologize. Instead, it was an excruciating and slow process. I kept going back to him for years. In and out of relationships, I would go to him when I felt low, he had become my poisonous love drug. I was hooked.

I had a final conversation with him at the end of those six years as I had come to the final chapter of letting him go. And he said, “Get paper, write this down. Mr. M is a piece of sh*t, and will always bring you down. He is sick and as close to death as someone can get. I am too good for him and always will be.” He continued to instruct me what to write, “I am too good for this and I will never again come back to you.” I said thank you, it was the only decent thing he had ever done. (*note in the future he would again attempt to bring me down because this is what most abusers will do But I chose to take it as a final gift before I parted ways for good.)

I lost my crown and I allowed abuse to be served instead of love. I was the slave girl and not the queen. But I learned and rose from the ashes.

And now, I refuse to let my shine dim. I refuse to allow pain in, instead of love. I have crowned myself again knowing that my worth is not found in anyone or anything, but instead, is inherent.

Have you lost your crown? Is it time to place your crown upon your beautiful head again my dear one? Do it. Do it for all of the women before you and for all of the girls and women to come.

Sending love and majesty to you all.

Christine Gutierrez is a psychotherapist, advice columnist, speaker, author, poet, and founder of  Christineg.tv an online hub that features psychologically-savvy and soulful advice, articles, videos, private consultations, workshops, retreats (both live and virtual), radio appearances, and television projects. “Ancient wisdom with a modern twist” is the motto. She has been featured in TimeOut NY Magazine, Latina Magazine as “The Future 15: The Healer,” Yahoo Health, Ebony Magazine, Cosmopolitan for Latinas, The Conversation, Cosmopolitan Magazine, Ricki Lake, Lifetime TV, and more. You can also follow Christine on Twitter and Facebook and Instagram And sign up for her weekly newsletter at: www.christineg.tv. Want a free 15 minute consultation call? Click here to set it up!

If you are wanting to heal these childhood love wounds and crown yourself with self love, then I invite you to join my free video series Fierce Love Now. Can’t wait to hear from you and see you there!