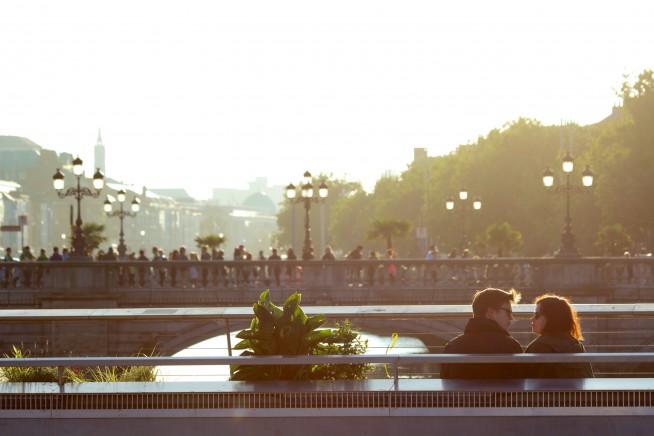 Thirteen years ago I fell in love with the wrong guy and he completely saved me from myself.

I was fresh out of college and was working as a day camp counselor in Estes Park, Colorado at the YMCA of the Rockies. I was there for a leadership training program with a non-denominational religious organization I’d joined back in college at The University of Missouri in Columbia.

You probably know the type of church I’m referring to. They’re the ones with the rock music, the church staff that’s into yoga and rock climbing and the pastor with the trendy haircut and tattoos. They usually meet on saturday nights and focus their membership on college students.

I’d joined this group, let’s call them “The River,” because I had a total crush on a guy that attended. Seriously. (I was twenty-two years old, remember) But, honestly, by my sophomore year in college, I just wanted to belong to something and with the poor state of my health and relationships I knew I needed to make a drastic change in my life. The River was the springboard to clean up my relationships, habits and lifestyle. And it worked. I completely reinvented myself.

Yet, there was a cost to belonging. After a few years of praying, learning and growing with the group, I started to question.

It started to bother me that as a woman I was only allowed to teach and lead other women and, regardless of how progressive The River claimed to be, they still claimed that homosexuality was a sin and “those people must be prayed for.” How could I be a part of this community when I had been practically raised by my aunt and her partner who were the symbol of true love and commitment?

And then I met Charles.*

He was tall, lanky and a bit goofy just like myself. When I first saw him I was instantly drawn to him like a bee to honey. It was his energy. His blue eyes. His 6’3” frame (at 6’1” I’d had a hard time finding a boyfriend that was over 5’10). But I was cautious. I’d been celibate and focused on my spirituality for three years – I knew a boyfriend wouldn’t be regarded well by my church friends.

As fate would have it, and to my utter surprise, he felt the same way about me. Soon I learned he’d done everything that I hoped to do someday:

Spend time at an ashram. Check.

Travel all over the world. Check.

And the kicker…he also had dreams of going to the Peace Corps. And it was done. I was in love.

But I didn’t go down that easy. Though Charles pushed, I was determined to stay true to my faith and not lose the community I’d created. Because, you see, Charles referred to himself as a Buddhist. He explained in no uncertain terms that he had no intention of joining my church, but he’d happily learn about my faith if I’d learn about his. This shook me to the core. This was more love and authenticity than I’d experienced in years. He thought we could make it work and combine our two worlds. So I gave it a try.

But life had other plans. Though Charles attended meetings, helped me babysit my pastor’s kiddos and even hiked a mountain during the night in a snowstorm to help rescue a few church staff who were abandoned, he wasn’t accepted into my church community. At first, the staff members and my pastor tried to convert him since they realized I was quite attached to having him in my life. They’d invite him to attend functions, but he was no dummy and they didn’t get very far. Eventually the staff stopped trying to convert him and instead tried to break us up.

During this time I was regularly told by members of The River that I wouldn’t go to heaven if I was with someone of a different faith. I was threatened repeatedly in person and by notes left in my room or on my car. If that wasn’t enough, most of my closest friends started avoiding me and life started getting really difficult.

It was about that time that I gave even more of my heart to Charles. Here was this man going through all of this because he wanted to be with me. He never once asked me to leave The River. But I’d seen enough. In the few months since dating Charles he’d shown me more gratitude, generosity and kindness than I’d ever experienced with my church community.

And so I quit. I thought that once I left The River that life would calm down a bit, but it only got worse. The rest of that summer Charles and I were completely shunned by The River community. My heart was broken. My soul felt lost. I was more in love than I’d ever been, but I’d never felt more alone.

Life got better once The River community left Estes Park and headed back to their college towns. Charles and I stayed on at the YMCA to teach outdoor education to youth from the Denver area and our adventure together continued. Little did I know that I’d need years to heal from the pain of that summer.

I wish I could say that Charles and I are still together today. That we got married, had several babies and lived happily ever after traveling the world together. But, again, life had other plans. We did get engaged for a short period of time after a few years together, but we ended our relationship in 2005. He was an amazing person, yet he had his own demons to fight and after giving what I bet was his all, Charles took his own life in January of 2009.

I’ll be forever grateful that Charles came into my life at the right time to save me from myself. Often in my life, I’ve seen relationships (especially intimate ones with men) used as teachers to wake me up from a destructive path I’m on. To save me from myself-from my insecure, closed mind and my addiction to belonging no matter the cost. Sometimes we have to fall in love with the wrong person, but at the right time, to save ourselves from ourselves. As I’ve found:

*This name has been changed.

Angela Watson Robertson is a holistic health coach, writer, reiki master and yoga teacher who teaches you how to live an authentic and balanced life. Find her free recipes, wellness tips and health coaching programs at www.angelawatsonrobertson.com. For holistic living inspirations, join her on Facebook, Instagram and Twitter.