The LIE of AFFILIATION. Or…Why Group-Think Can Really Suck. 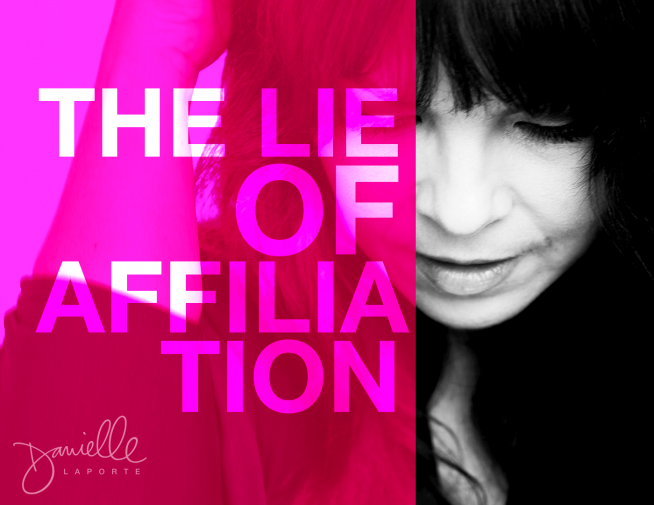 We have to fall for some lies to get to our truth. This is a big one….

THE LIE OF AFFILIATION. The Lie of Affiliation says, “Groupthink is good think.” We could also call this “The Lie of Being Cool.”

Flashback: I’m in one of those personal development workshops where the Apparently Evolved Guy Who Has More Money Than Everyone in the Room is working his neural-linguistic programming kung fu to get participants to share their deepest secrets with a group of utter strangers. (What? You were there? Thought I recognized you.)

“Who wants to share next?” asks The Leader Guy into the microphone. There are only thirty of us in a small conference room. He doesn’t require a mic to be heard, but, you know, spectacle. He doesn’t wait for anyone to volunteer. He zooms in on Pablo. Because it’s obvious that Pablo is scared sh-tless. Now, I naturally gravitate to the sweet, scared guys in group settings because I’m a natural mama bear and it’s easy to make the kind and quivery guys laugh. It’s a win-win. So I was sitting next to Pablo, noticing that he’d balled up tissue in both hands to help with his sweating palms. I looked at him to say, Dude, it’s your call.

Leader Guy walks Pablo through his proprietary and trademark-pending series of spirit-cracking questions and, right on cue, Pablo gets into his childhood story. An obese and verbally abusive mother, living in a house of total squalor and infestation, being sexually abused by a relative. It went on. It got worse. Unspeakably (unless you’re in a group workshop) worse. That abuse resulted in all kinds of neuroses and obsessive-compulsive behaviour in adulthood. He cried through his story, and all the emotionally available people in the room joined in with him. Leader Guy walked him through the final phase of the Q-&-gruelling-A. And then, I kid you not, he signaled all of us to group-hug Pablo while the workshop DJ in the back of the room played Wynonna Judd’s cover of Foreigner’s “I Wanna Know What Love Is.” You can’t make this sh-t up, but you can pay $795.00 plus accommodations for it.

At dinner, one of the spirit-intoxicated attendees says to me, “Isn’t this wonderful?! That sharing that Pablo did is going to change his life!” I looked up from my bowl of quinoa and said, “Maybe. But I think when he gets back to work on Monday he’s going to regret the sh-t outta this.”

Because some things are too sacred for a fluorescent-lit hotel conference room.

There are some things you should only tell your qualified therapist or your best friend in the sanctity of private space, when you’re truly ready—and that’s how the real healing happens. With respect and skill, not manipulation.

But groups get it out of us, don’t they? We tend to love the comfort of belonging, even if it’s belonging to miserable company. And leaders take the heat off of us to do the work ourselves, if only temporarily. All we have to do is spill the beans and cry, and we’re welcomed right in. But a few days later, we wake up with a wicked spiritual hangover.

Wanting to be affiliated with a cause or group can get more convoluted when we’re getting together for spiritual reasons. It’s not like we’re meeting to strategize Ponzi schemes or kidnappings. We’re getting together to make the world a better place, man. Who’s gonna stand up in the “How to Be More Loving” retreat to say, “The workshop leader is being mean to people and this is total bullsh*t”? That would not seem very wuving.

We experience group enchantment to define our individuality. We enlist, we play, we promote, we wake up, we leave the flock. And then, we go find where we truly belong.

This is a peek-a-boo from my new book love, White Hot Truth, Chapter 2: The Really Big Lies. You can read or listen to the entire chapter free by clicking HERE.