It Takes Courage to Tell The Truth 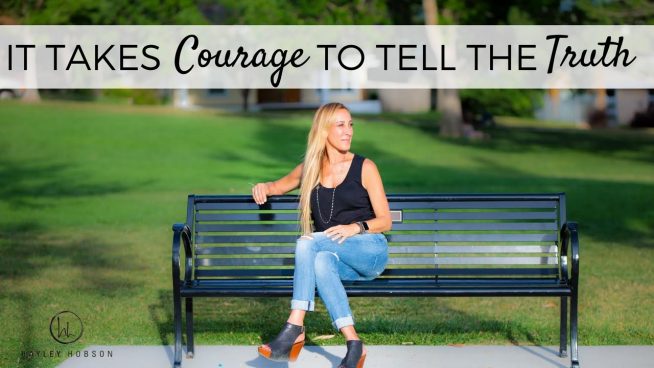 A few days ago, Madeline and I were on the beach. She was quietly sitting on a beach chair while I had been talking on the phone. I hung up the call, put the phone down and took a look at her. She immediately stuffed something behind her back.

I got up, looked around and found an Oreo cookie with three gummy bears on top of the white icing.

“Where did you get that?” I asked.

She doesn’t know who handed her the Oreo, how she got the idea to open it up, make a gummy bear sandwich with it and then try to hide it from me when she knew I wasn’t paying attention?

I’m not sure what age it started at, but lying and hiding things and just, in general, being sneaky at some point became the norm for her.

Lying is one of the most disrespectful things one person can do to another. But most peeps don’t lie, do they? I mean, most tell the truth, right?

This is going to blow you away: a published study showed that 60% of people lie at least once; what, in a week, a day? NO. In a ten minute conversation.

You’re probably thinking, not me. I don’t lie. Well, the study showed most people lie. They just don’t think so because we all have different definitions of lying. And not everybody agrees about what telling the truth means either. A lot of peeps attach the stigma of being labeled a liar to their self-worth so they deny it.

The average person will say they ALWAYS tell the truth. Are they lying? Not necessarily. They believe it. Well… except for little white lies. You know; they’re just teeny-weeny lies. They don’t count, do they?

Well, technically yes. A blatant lie is a deliberate statement we make intending to deceive or hide the truth. (Like the gummy bear situation?)

We say something misleading as if it’s true. And we can also lie without saying a word. Faking it—creating a false impression—is also a lie.

Are all lies harmful? Some believe it’s okay to stretch the truth or embellish. And there are lies that are not malicious, but used as defense mechanisms or told to protect someone’s feelings—or even our own. Are these types of lies okay?

Before you answer, think of it this way: how would YOU feel if you found out someone was being dishonest just so your feelings would not be hurt? Would that be okay? Would you be able to trust what they say in the future?

The truth is the truth, period.

So, why are some of us afraid to tell the truth?

Well, confrontation can be super-uncomfortable. Have you ever heard of “people who lie even when the truth sounds better?” People often lie to avoid punishment—even when there is no punishment coming. Why?

Was Madeline afraid to tell me she snuck the Oreo from somewhere? Was she afraid to rat on her dad for buying them? Or on her sister for giving them to her?

How do you feel when you tell a lie? Most people feel guilty, but compulsive liars can be super-comfortable with lying. It’s a way of life, especially if they’re pathological. Sometimes they believe their lies even when the truth is laid out for them.

How Can You Stop Lying?

Breaking the habit of lying starts with knowing why you lie in the first place. Do you lie because you don’t feel good enough? Because you want to feel important? Because you don’t want to deal with confrontation? That’s usually why many people lie. They literally just don’t feel like dealing with the alternative.

Once you figure that out, think about why you want to stop lying. Do you want to feel better about yourself? Do you have trouble keeping track of your story or do your lies spin out of control?

I know—sometimes a lie is easier, but:

If you break that bond, it’s hard to rebuild a relationship. Sometimes you won’t be able to get it back, and even if you don’t, change for YOU.

Are you ready to gain back the trust you’ve lost because of your lies? Good! This shows you are gaining self-respect. Hey, it can take a ton of courage to be honest. Begin by paying attention to how you are feeling when you lie. Knowing your motivation will keep you moving forward.

Be patient. It can take time to change a habit but the more often you tell the truth, the easier it gets. You’ll see how freeing it is to be honest and pretty soon you’ll feel safer telling the truth.

Sometimes just talking with someone can help dissolve your fears and help you live the quality of life that comes from being honest and authentic. Do it. You’re worth it! And you’ll feel a whole lot better living in authentic truth.