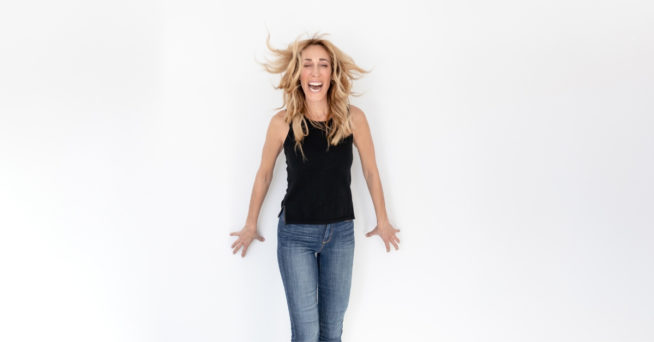 Have you ever had a moment where you were on the verge of tears… in public?

You were doing your best to hold it back. But with every blink of your eye, the stinging got stronger.

Maybe you turned your head from side to side, willing the tears to absorb back into your eyeballs … but they just weren’t going to cooperate, so you let it go.

And with each drop, you felt a little less embarrassed, and a little more connected to yourself in that moment.

This was me a few weeks ago.

I was standing in a crowded room, surrounded by other entrepreneurs who were each on their own journeys and most likely experiencing their own little ah-ha moments… but I didn’t even notice because I was so wrapped up in my own.

Maybe it’s trite to say I was having a Come To Yoga moment, but I’m gonna say it anyway.

Here’s why: you ever have a year that feels like it just.won’t.end? Every time you think you’ve hit the bottom of what it’s going to toss your way, it comes back with one more throw you didn’t see coming.

I didn’t realize at the time what the universe had in store for me was a series of unfortunate events that would nearly break me. Of course each one was surmountable… but if you’ve ever been in a similar place, you know at a certain point you just get TIRED.

Sometimes, you question why you’re even still trying….

It started in March with a flood in our new house that resulted in carpet getting pulled up and replaced. Which, no, is not a big deal in the grand scheme of things except at the same time – without us realizing it right away – our house in San Diego had a sewage leak.

It took us awhile to figure out where the smell was coming from until we ended up finding an inch or two of muddy water in the crawl space we store all our patio and pool furniture. Crap. Pun intended..

That wasn’t even the end of our issues with sewers. The septic tank in our new home began causing trouble which led to our yard flooding… and the water had nowhere to go but into our basement. Again.

Then both of my parents ended up with injuries: my mom with a broken spine, and my dad had a complication with a pretty major surgery he’d had.

And in the midst of all of that… I was watching the business I’d worked SO HARD on the last seven years fall apart before my eyes.

Leaders were quitting left and right. My ads were not converting. My copy was falling flat. I didn’t know who my ideal client was anymore.

Every day I was either waiting for one more calamity to happen in my personal life, or I was  witnessing another issue rise up in my business I didn’t know how to solve.

I was not consciously creating the life of my dreams. I was consciously attempting to survive.

Then… I had the moment I just described to you. With tears on my face, I suddenly knew the why behind every single heartbreak I’d been experiencing since I had made the declaration that I was going to own 2019.

I was being tested.

It was because I’d put my intention out into the universe. You see, the universe was just making sure I was sure. It was like she was saying back to me “Oh yeah? Well let’s see how badly you want this.”

And in that moment I realized I had passed the friggin’ test. Everything I’d experienced that year had been preparing me (in a number of extremely unpleasant ways) with the tools I’d need to level up my game.

I’d been refining my skills without even realizing it.

The only thing that could possibly get in my way was myself and my own limiting beliefs. My lack of being intentional with my actions and my choices.

My lack of creating space for expansive growth.

Intentions make space for magic to happen – and that was my biggest ah-ha moment of all through this life-altering moment.

Sometimes the deepest truths are the most simple, aren’t they?

And that’s why I’m going to share with you three ways you can set intentions but from the mindset that when you do so, you may experience your own version of testing and preparation.

But my fingers are also crossed that your life becomes a complete shitshow as soon as you set them because then you know your game is ON.

1. The first step to setting an intention is to make it specific.

What do you specifically need in order to hit your next level?

Those are not intentions. Those are general statements that provide no direction for what you actually have to do to accomplish anything.

Name what you need, clearly and succinctly.

That may look like saying, “I need three women between the ages of 25 and 35 who are willing to invest in their health journey and commit to building a business with their own dedicated customers.”

Or, it may look like saying, “I will make $10,000 each month from my business because I am committed to bringing in 20 new customers each month, who are invested in cleaning up their health and building their own personalized wellness routines.”

2. The second step to setting an intention is to apply what you know.

I’ve got a truth bomb for ya, friend: knowledge isn’t power.

So you can toss out any lapel pin you’ve saved from high school with that phrase emblazoned on it because it’s plain wrong.

Applied knowledge is power. It’s useless to know something if you don’t do anything with what you know. @hayleyhobson (Click to Tweet!)

When you set a very clear and specific intention, chances are your brain immediately begins to figure out ways for you to reach that goal.

If you know you need to attract a certain type of person, then you know your next steps are to uncover where that person is (either online or in your hometown, or both) so you can begin your collaboration with them.

This step is where the real work is. And this is where you’re most likely going to begin noticing the universe will start messing with you.

3. The third and last step to setting an intention is to understand you’re conspiring WITH the universe and not against it.

This is your opportunity to not go off track like I did.

Listen to me: you want the universe to come play with you. Because when you expect this to happen, you’ll be in the right frame of mind to play right back.

You’ll be prepared to accept the challenge and use it as fuel to keep going.