To Bone or Not to Bone 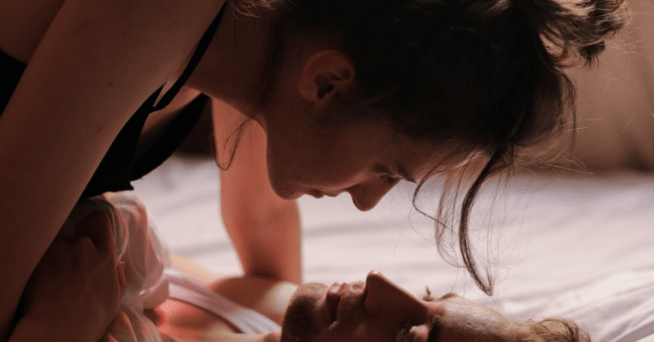 (Not a Fish, Silly, My Partner)

I remember the chilling moment that my coach said this simple sentence to me that changed my relationship with my husband forever: “You know, Laurie, sex is the only thing that really distinguishes a marriage from a friendship.”

In other words: you and your husband are friends who co-parent.

The saddest part? We weren’t even that friendly.

Eight years in, two kids later, I had sold out on my marriage. I and it was nowhere near my dream – I had rated it a 4 out of 10. Somewhere along the line, I even decided that sex was optional. I mean, since I clearly didn’t care about it anymore, it must not be important or necessary, right?

I think back to those “old days” and feel bad for my spouse. There was no reason, other than my own issues (fear of intimacy and an aversion to giving up control), not to have sex. And he just had to suck it up. Whereas some areas he could talk about easily with me, this topic was taboo, mostly because of male/female dynamics. He had no real structure, or invitation to bring up his concerns. Recently, my husband even joked to me that, back then, he knew there was a possibility of sex, IF and ONLY IF the following were applicable:

1) He took me to dinner (and the food didn’t upset my stomach),

3) We got home early enough,

4) No family member called during the evening, and, last but not least,

5) He said nothing I considered stupid.

Then and maybe then, I might consider having sex with him that night. Even before two kids, this meant once a month (at most). After kids, less.

Truth is, I really was (and still am) committed to having my dream partnership and a great sex life BUT my excuses and “mood” really got in the way for a long time, and we got into an “accidental” abstinence rut.

I wondered aloud to my coach if it was right to “force” myself to do something I “didn’t feel like” doing and she directed me to remember how I felt after I did something that was: a) brave, b) a challenge to my mental construct, and c) great for my marriage.

I always felt proud when I ____, and in this case, triply so. So, I changed my thinking from “sex is optional” to “sex is crucial to the good vibes in our home,” and from there I began to change my actions in honor of my ideals. Sure, sometimes “it” (aka my niceness) didn’t come naturally, but with a little hard work and the right promises and consequences, we made it.

It didn’t take long before I understood how deeply important sex was to our relationship. It’s much harder to feel disconnected and be snarky to someone with whom you were just skin to skin. And to boot, there’s the boost of pride and happiness that comes from stretching myself (pun intended) and the endorphins and oxytocin that get released.

Powerful, right?! Not to mention…fun!

I’ve noticed over 16 years of using The Handel MethodⓇ in my own life, that when left to my own devices, and without my coach consistently pushing me to take accountability for combatting my fears and brattiness, I do not show up how I want to in my marriage.

What if it’s not just that I (and we all) can be moody? What if the truth is that any human’s mood is actually directly correlated with how much their thoughts and actions of the last 24 hours matched their highest ideals? At least for me, when I think loving thoughts about my husband and make it hot and sexy between us…I am always in a good mood!

I used to wonder what was the easiest way to shift my ____. And, after much “home” study, I’ve learned to change my thinking, my feelings, and my actions. But I’ve concluded the most powerful message for me of all is: Figure out what you really want and JUST DO IT!

Over and over, I am glad I do. You coming (pun intended…again)?

P.S. Inner.U is a 12 session online course that gives you the tools to hack into your own life, hone your dreams, and have every last thing you want in the areas that matter most to you: CAREER, MONEY, LOVE, TIME, FAMILY, and HEALTH. Do this life thing better from wherever, whenever!

Laurie Gerber is a Senior Coach and Co-President of Handel Group® Life Coaching. For over 15 years, Laurie has led international events and private coaching courses. She has appeared on MTV’s True Life, A&E’s The Marriage Test, Dr. Phil and TODAY. Image courtesy of