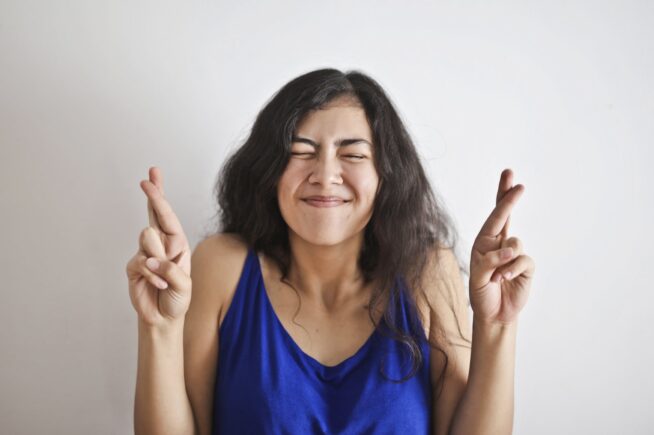 “You’re a lucky man, Eric,” a new acquaintance told me the other day.

From his point of view, here’s why I’m lucky:

I work from home with a flexible schedule and have done so for the last 15 years.

I’m successful as an entrepreneur and I’m genuinely enthusiastic about what I do.

I’ve lived abroad and I first moved across the globe in my early twenties — this often comes up in casual conversation.

When people attribute it all to luck, I know they’re ignoring the choices I’ve made that let me live the life I want.

But there’s something else that bugs me even more. They seem to think that luck just happens. That isn’t true in my experience.

Luck comes to those who create the circumstances for it. Or maybe it’s better to say that luck avoids people who’re determined to be unlucky.

If you’re looking for advice from a “lucky man”, read on.

1. Lucky People Don’t Cling to a Narrow Idea of Success

Luck can easily pass you by if you don’t stay open to new possibilities. You may get stuck in a rut, trying to work toward impossible goals. If you’re too rigid about how you see your future, you won’t notice a few great opportunities hovering right in front of you.

Some people feel unlucky because they haven’t achieved their childhood dreams. This might sound callous, but in my opinion, childhood dreams are overrated. We form them before we understand who we really are. And these wishes are always based on what we see around us growing up.

But the world has changed since then. I had a bunch of starry-eyed ambitions when I was a kid, none of them included being an entrepreneur working from home. It simply wasn’t an option at the time! I changed my course as the world started changing around me.

If you feel trapped by bad luck, you need to start with some tough questions. Ask yourself:

You should also interrogate your approach to responsibility — it’s all too easy to blame bad luck for mistakes you’ve made.

I recommend doing regular self-introspection slowly, on paper — take a few days and really think about it. After you’re done, you might be willing to try a different approach to the things that keep tripping you up.

Back when I was still working in an office I met a guy standing next to me in the elevator. He invited me for afternoon tea and we quickly became friends. He offered me a job I couldn’t refuse, handling online marketing remotely for his company. I haven’t worked in an office since.

You won’t catch a lucky break until you start creating opportunities for yourself. The best way to do that is to meet new people.

I’m not saying you have to be a networking savant. But if you stay open to real human connections, you might meet someone who’ll help you out (or who’ll give you the information you need to start doing something new — lucky outcomes still require work).

If you tend to avoid social interactions, you won’t meet the person who’ll bring luck into your life. And if you dislike people by default, you likely won’t value anything they have to say.

Don’t get me wrong, most advice you get from strangers is crap — but there’s always a chance someone will inspire you to change your life for the better.

In a fascinating paper, psychologist Richard Wiseman researched lucky and unlucky people from many different demographics. The ones who had luck on their side were likelier to be extroverted.

One of the study participants — a man who considers himself lucky — worked out a strategy to force himself to meet a wider range of people. “He had noticed that whenever he went to a party, he tended to talk to the same type of people. To help disrupt this routine, and make life more fun, he thinks of a color before he arrives at the party and then chooses to only speak to people wearing that color of clothing at the party! At some parties he only spoke to women in red, at another he chatted exclusively to men in black. Although it may seem strange, under certain circumstances, this type of behavior will actually increase the amount of chance opportunities in people’s lives.”

But just meeting people isn’t enough — you also need to maintain a conversation with them. Try to keep an open mind and approach people with kindness. Most of them will respond to you in the same way.

So next time you’re in an elevator with somebody, don’t hesitate to initiate the conversation.

In the same paper, Wiseman found that bad luck is often a self-fulfilling prophecy. People who see themselves as unlucky will expect bad things to happen to them.

That makes it likelier for them to notice bad things. They might automatically exaggerate these bad things, and then they’ll use them as proof that they truly are unlucky.

In a way, pessimism and bad luck form a feedback loop. But does the same apply to optimism and good luck? Do lucky people tend to imagine that the future will be rosy?

Not exactly. Wiseman found that lucky people are perfectly able to imagine negative outcomes. It’s just that they tend to apply a glass-half-full kind of approach to them. For example, all the participants in his study were asked to imagine living through a bank robbery. The unlucky ones concluded that the robbery was another example of bad luck in their lives. The lucky people? They said that it was fortunate that the robbers didn’t injure anyone.

“Lucky people tend to imagine spontaneously how the bad luck they encounter could have been worse and, in doing so, they feel much better about themselves and their lives. This, in turn, helps keep their expectations about the future high, and, increases the likelihood of them continuing to live a lucky life.”

If you’re not the optimistic type by nature, don’t worry. Like so many other traits, this is something you can develop deliberately.

You can start with something called the Best Possible Self exercise. For five minutes each day, spend time thinking about yourself in a future where everything turned out great for you. Give this future you everything you want in life — imagine that you’ve achieved your goals, you’ve had luck on your side, and all your hard work has paid off. Then try to step into your future self’s shoes. How do you feel in their place?

The more you think about your best possible self, the easier it will become to navigate life. You’ll find it easier to forgive yourself for mistakes. You’ll be likelier to try out new things.

Unfortunately, bad luck and bad mental health can go hand-in-hand, and it’s hard to make progress if you’re stuck in that kind of loop.

Some people see themselves as unlucky because of depression, anxiety, or a history of trauma.

They are prone to catastrophizing, and that makes it impossible to adopt a glass-half-full attitude. They feel uncomfortable in new situations, and they just can’t relax enough to embrace (or even notice) a lucky break coming their way. As much as they’d like to become an optimist, they simply can’t change their outlook in life.

Taking care of your mental health is as important as looking after your physical health. Here are a few things all of us should do.

Meditate. Becoming more mindful will make you happier in general. But it can also help you become luckier. According to research, “mindfulness meditation reduces cognitive rigidity via the tendency to be ‘blinded’ by experience” — meaning that you’re more able to see opportunities and novel solutions if you regularly practice mindfulness.

Make enough time for yourself. You may be stuck in a rut because you simply don’t have time to think about your life. I know it’s not easy, but you must create some time alone with your thoughts without feeling guilty. I like to spend my morning alone time journaling, but I think contemplation can be just as useful.

Turn luck into a useful tool. Interestingly, some superstitions can relieve anxiety and they can help us get a handle on our mental health problems. They let us feel like we have control over an unpredictable world. So embrace whatever rituals can help you break out of your negativity loop! Put on your lucky shirt and decide you’re going to have a good day for once.

Of course, sometimes the best option is to start getting professional help. The past year has taken its toll on all of us, so it’s not surprising if your mental health has deteriorated. Therapists and other professionals can help you reframe your thoughts and actions, even if you didn’t need that kind of help before.

To become a luckier person, you need to stay flexible, sociable, optimistic, and you also have to be kind to yourself. All of that is easier said than done. If you aren’t able to embrace these changes, there could be an ugly obstacle standing in your way.

We can all fall prey to it now and again. But if you believe yourself to be unlucky, it’s extra tempting to fixate on other people’s ‘lucky’ lives.

In the age of social media, it’s easier than ever to dig into other people’s personal business. You might catch yourself staring at someone’s photos, comparing your life to theirs. Social comparison is a habit you can fall into without noticing, and it often increases anxiety and depression.

I have had to deal with an excess of envy before. In my experience, it’s hard to shift your perspective — but since I’ve stopped thinking so much about other people, I’m both happier and luckier.

The first thing I did was to stop commenting on other people’s luck. (That might be part of why it bugs me so much when people comment on mine.)

I also quit most social media platforms cold-turkey. I unfollowed a bunch of influencers and other people whose job it is to evoke envy in the public.

It helps to remember that I can never see the full story of other people’s lives. And to be honest? I don’t need to know! It doesn’t matter to me whether others are lucky or not — all that matters is how I’m doing in life.

+1. Lucky People Don’t Sit Around Waiting for Luck to Drop Into Their Lap

They can’t rely on “luck” to get them out of every difficult situation.

Luck will arrive at some point, but nobody knows when and how. All we can do is to remain prepared and expose ourselves to more opportunities to experience a fortunate stroke of serendipity.

And that brings me to my favorite quote from Ernest Hemingway’s The Old Man and the Sea:

“Only I have no luck anymore. But who knows? Maybe today. Every day is a new day. It is better to be lucky. But I would rather be exact. Then when luck comes you are ready.”