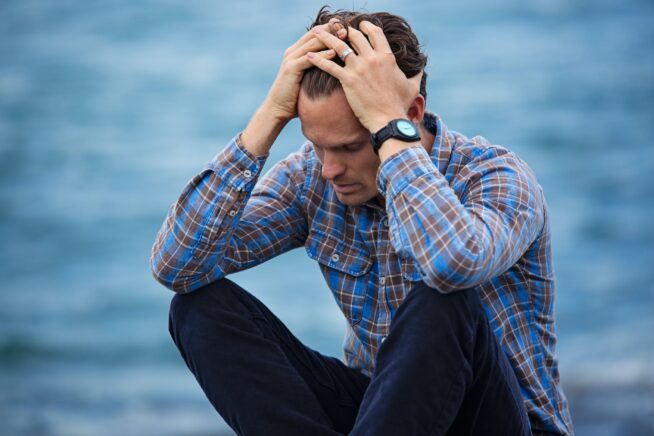 I distinctly remember my dad’s birthday from three years ago. I forgot to call him. Didn’t call him that day at all.

The first pangs of guilt crept over me the next day as I woke up. It was too late! I wasn’t sure I would ever forgive myself. And I didn’t stop there. My imagination went into overdrive and I envisioned my dad sitting at home alone, wondering if anyone cares about him anymore.

Then, I started thinking about some ways to make my amends. Should I spring a surprise visit on him and take him out for lunch? Should I bring my kids over as well? Should I buy him something nice, a more impressive present than I’d usually get? There were so many options, each grander than the last. and I was paralyzed with indecision.

Worst of all, I was so consumed by my guilt that I couldn’t bring myself to pick up the phone and call him already. With each passing moment, I was locking myself in a toxic cage, ready to throw away the key for good.

I felt like the worst son in the world, and my guilt didn’t let me do anything about it.

Unfortunately, these all-consuming remorse spirals can get triggered by relatively trivial things. Whatever the cause, guilt wreaks havoc on our mood, self-acceptance, and long-term happiness.

But how do we find our way around it? Eventually, I was able to shake myself out of my funk and pick up the phone. But first, I had to take control over my guilt.

Guilt “involves a sense of moral transgression” (Tilghman-Osborne et al. 2014), a negative self-regard that makes us reassess our position within our family and society.

It’s a highly internalized feeling, rooted in what we’ve done to other people. It implies the need to seek atonement, forgiveness, and redemption — but even if we achieve these things and get absolved by our community, we may still feel guilty in our own mind. The wrongdoing sticks in our memory and makes us cringe each time we remember it.

This is clearly a complex emotional mechanism that demands a complex approach to untangle it. That is, if we’re willing to try.

In all too many cases, we get so accustomed to the feeling of guilt that we can no longer shake it off. It becomes almost comfortable — we still feel like shit, but we don’t want to do anything about it.

I hope you’ll forgive the comparison: living with all-consuming guilt is like dating someone who’s bad for you. You know the situation is toxic and you know you should leave — but it’s ridiculously hard to break the habit and get away.

Not all guilt is bad

My wife and I work hard to teach our two kids right from wrong. I’ve always felt that this is one of the toughest things about parenting — how do you raise children who make good choices, without stomping on their self-esteem (or else overinflating it)?

Here’s a recent example of how I tried to do that.

My daughter has her little stash of coins in her piggy bank and she keeps it on her nightstand. My son knows he’s not allowed to touch it, let alone take the coins or damage the piggy. During one of his shenanigans, he knocked the piggy over and it shattered to pieces. I was with my daughter in the other room and we rushed to the bedroom to see what happened.

It was immediately obvious that my son was guilt-stricken. Although my first urge was to yell at him, I counted to ten and sat him down instead. We talked about why his behavior was out of place. He was obviously aware that he transgressed, he didn’t need me to condemn it even further. He was able to move past the mistake quickly, and I know I can trust him not to do it again (or at least, not to get this careless too often). He apologized to his sister easily enough.

Guilt is a universal human experience. Recent studies show that even psychopaths experience a version of it! In normal cases, guilt is a useful tool that keeps us on track and deters us from temptations and bad habits. This is a natural part of growing up and learning about the world.

The problem is when guilt grows out of proportion.

Good vs. bad guilt — how to tell them apart?

Can you see the difference between my son’s guilt and my guilt (other than the fact my son had someone to acknowledge his remorse, which was certainly helpful to him)?

It’s all about this corrective action. My boy is not old enough to do it on his own, so I was there to guide him through the journey. I try to do that as much as possible.

But what about me? I should be old enough to help myself, right? But I fail at it all too often. I get dragged down by my negative emotions and I stop doing anything to make up for my mistake.

The ways I could make things right did cross my mind, but I kept going with the pointless guilt. My train of thought wasn’t constructive. It never occurred to me that I can avoid this kind of mistake in the future by editing my calendar (or putting a reminder on the fridge for next year). I simply couldn’t stop thinking about my failure.

My only focus was how bad I felt about it. It was, frankly, a selfish way to behave.

So, how to make it through your next episode?

Ask yourself: What is this voice of guilt telling me?

If you want to make your guilt healthier, you need to get that voice to acknowledge your mistake without blowing it out of proportion. Pay attention to the implications of your guilt. Don’t fall for your own catastrophizing — stick to the facts.

Ask yourself: Whose rules I’ve broken?

In the majority of cases, we feel guilty when we break the moral rules WE placed on ourselves. That leads to a distortion in perception — of course, we think our rules are the most important ones in the world. But that doesn’t always match up with reality.

As it turned out, my dad was out with his friends on a field trip that day, and he didn’t even notice I didn’t call, let alone blame me for being the worst son in the world.

Ask yourself: Am I punishing myself or making this better?

Unhealthy guilt feeds off our self-reprimands. We overinflate the damage we’ve done to others, and then we succumb to hopelessness. To get over unproductive guilt, you have to be realistic when assessing the harm you’ve caused.

You should also try to be as realistic as possible when you’re thinking about ways to make amends. Don’t overcompensate (like my fleeting daydream of buying my dad a new car) but also don’t minimize your ability to make a difference.

Ask yourself: How can I avoid this in the future?

The best way to navigate away from guilt is to learn your lesson. You don’t necessarily need to reframe your beliefs, principles, or values — even after everything, calling my family on special days is very important to me.

Just acknowledge what you’ve done, and make a few simple changes that will help you avoid the same issue in the future. Maybe you need to change your schedule, be more mindful, improve your habits — whatever it is, it’ll surely make you into a better person.

Patience is the best antidote to guilt

Unhealthy guilt is the perfect proof of how we can never make a change by applying force. Aggression, even if it’s directed toward yourself, is seldom fruitful. This is why unhealthy guilt is an ugly trap to fall into — it has no benefits, it’s just a power trip you turn against yourself.

As soon as you recognize this happening within you, you are on the right track toward recovery. It helps to treat yourself like a little kid who made a mistake — stop yelling at yourself, focus on simple steps you need to take, try to make amends, and learn your lesson.

It takes time, but you can grow out of an unhealthy guilt habit. I am much calmer since I’ve started giving myself permission to make mistakes. And in case you’re wondering, I’ve never forgotten my dad’s birthday ever since.