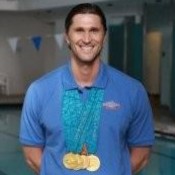 Lenny Krayzelburg is a four-time Olympic gold medalist. He won his first three gold medals in every event in which he participated at the 2000 Olympic Games.

Despite knee and shoulder surgeries that kept him out of most competition during the three years following the 2000 Games, Krayzelburg came back to qualify for the 2004 Athens Olympics and won his fourth gold medal.

In 2005, Lenny founded the Lenny Krayzelburg Swim Academy. There are currently five US locations. Its core purpose is to teach children to be water safe and inspire love for the water.

Lenny is married and has twin daughters Daniella and Alexa.
Inspiring