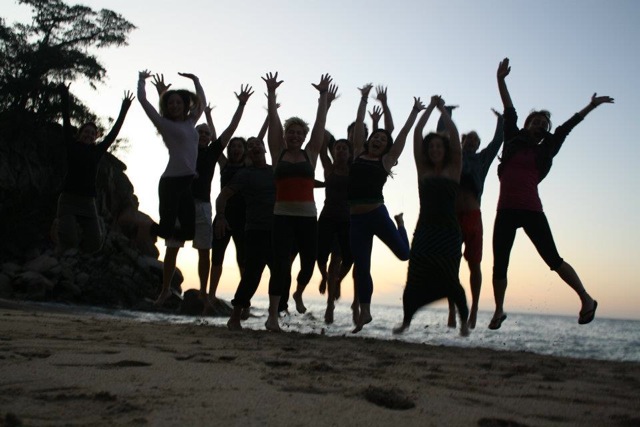 How Do You Define Success?

I was sitting on the couch with my husband a few nights ago and I looked over at him and asked him: Did you have any idea, when we started dating, that I’d be this successful?

My hand quickly shot over my mouth.

For so many reasons.

1) Dare I say out loud that I was successful? Let alone “this” successful?

2) Was I even successful? I had never said that out loud. Or really thought it for that matter.

3) How can I be successful if I don’t have a lot of money?

He looked over at me and said: I knew you had potential.

He was being facetious. And yet, he wasn’t.

I was waitressing at The Newsroom Café, and had been for thirteen years, suffering from depression and miserable when we started dating. Truly not the Jen I am today. She was in there somewhere, buried under the layers of  black aprons, but it was deep under the dust of restaurant smells.

Here’s our story in a nutshell:

We met fifteen years ago.

My first love had just dumped me and I had a nervous breakdown, or close to it, while I was living in New York City. I relived my father dying like a big fat cliché and felt abandoned and scared. So I moved to California where my mom and sister had moved a year prior. We had moved there once before after my dad died when I was in the fourth grade and then moved back to NJ again when I was in eighth grade. In that time we lived in California I made friends for life, started acting and was even on Punky Brewster. Moving back to NJ felt like a cruel joke to me at age thirteen and eighth grade was borderline suicidal for me. Not a joke.

I got over it and fell in love.

Cutting back to the New York years: first love dumps me and I move back to California. We were like the crazy Jewish traveling gypsy women who only traveled between LA and South Jersey.

My mom had this studio on Robertson Blvd. in West Hollywood which she rented out to actors and acting teachers and movie makers and other Hollywood types. She called me and said she had a writer she wanted me to meet and, that, oh yeah, she was dating Neil Diamond.

(I still have the Harley-Davidson leather jacket he gave me for Hannukah that year.)

We met at the Newsroom Café near her studio. I looked older than I do now because I was so anorexic and pale, and Robert, the writer my mom wanted me to meet looked—nice.

He was nice. Which, for me, at twenty-one, meant one thing—boring.

Not long after I started working at The Newsroom Café Robert sent me roses. I didn’t know they were from him because I thought him far too shy, and too nice to do such a bold thing. So I was stumped as to who the “Robert” was who sent me roses at work.

He called and asked if I got said flowers.

Eeek! Yes I did get flowers and I just want to be friends, I said like the twenty-one-year-old I was.

(Did I really say that?)

I am still working at Newsroom. Robert comes in. I recognize him straight away. (I have a photographic memory. People would come in to the café to eat in 1999 and in 2005 I’d wait on them again and ask if they wanted the chicken pot pie again.)

He looks cute, I remember thinking, I’ll go over.

He says he remembers me but cannot remember my name.

(I still think he was lying about not remembering my name. He still denies it. Although now, I see he has a horrible memory and was probably NOT lying.)

We went out for dinner, and afterward, sitting in his car, I knew I was going to marry him.

He tells me now that he waited for me all those years.

So yes, he saw potential.

But all those years I was stuck and depressed and we would have never made it. I had to go through what I went through and meet him again to fully blossom.

So here we are on our couch. In our apartment. With my hand over my mouth in shock because I actually said out loud that I am successful.

We are taught to not say that. Or that we are beautiful.

Aren’t we taught that? Even subconsciously?

What does success even mean?

I no longer wait tables. I am happy. I have fun. I am sitting on the sofa next to the man I love watching Modern Family. I get paid to do what I love.

And here I am.

You are reading my blog.

Is my nephew who has Prader Willi Syndrome and Autism successful even though his “milestones” are different than other kids his age? (Answer: yes.)

Are you successful even though you ended up walking a marathon when you had intended to run? (Answer: a resounding YES!)

Am I successful even though I need a pair of hearing aids to help me hear, and even then I think you are saying Dan when you are saying Sam? (Answer: yes.)

Am I successful even though I wrote a blog post about being hard of hearing and not being able to afford hearing aids? (Answer: Yes. Someone who took my yoga classes read that very post and got me a pair of $10,000 hearing aids. It’s okay I could not afford them. I did not think less of myself because someone donated them to me. In fact, I bowed in gratitude to human nature and kindness and social media. Big success!)

Is my friend, who does play after play, successful even though she still has to have two waitressing jobs? (Answer: yes.)

Who or what measures success?

Does success mean money? (Answer: no.)

Are we supposed to acknowledge our own success? (Answer: Sure, why not.)

You see, my husband always believed in me. He did! From the moment he met me—when I was twenty-one and anorexic and lost and scared—to now. He may not have remembered my name all those years later but he most certainly remembered who I was.

Even though I had forgotten.

He had an unwavering faith in me when I had no faith in myself. It took years to come back to him because I was not ready.

I am ready now.

I am ready for success.

And let me explain what I mean when I say success.

I mean joy. I mean laughter. I mean being able to say “I love what I do and I do what I love.”

By success I mean: love.

I am ready for love.

What are you ready for?

In the comment section below write down how you define success. Also feel free to add what you are ready for in your  own life. Finish the sentence: To me success means ____________.

* Above photo was taken at my Mexico Manifestation Retreat in February 2012. It is the one of the last known photos of my beloved friend and student, Steve Bridges, the well-known comedian and impersonator who suddenly passed away weeks after this photo was taken. He was one of the most successful human beings I have ever met, not because of his money or fame, but because of his undying joy of life.

Jennifer Pastiloff was recently featured on Good Morning America. She is a yoga teacher, writer, and advocate for children with special needs based in L.A. She is also the creator of Manifestation Yoga® and leads retreats and workshops all over the world. Jennifer is currently writing a book and has a popular daily blog called Manifestation Station. Find her on Facebook and Twitter.