How to Shortcut the 10,000 Hour Rule and Make Your Contribution to Life 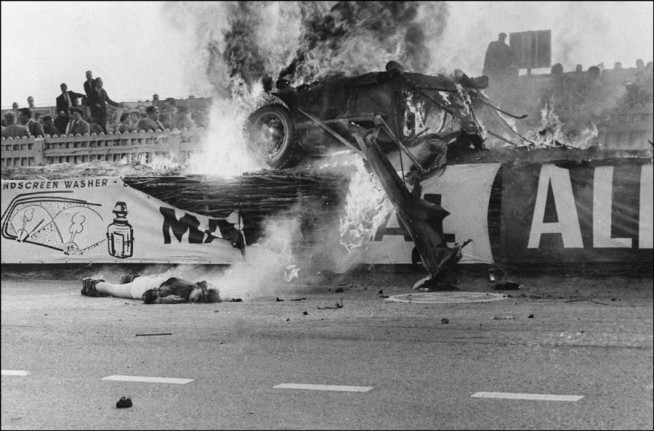 Pierre Levegh killed 88 people in a car race. Even I am not that bad a driver. I’ve only almost killed one person. Maybe two.

Pierre tried to get ahead of the Aston Martin in front of his Mercedes, made a sharp turn, flew into a wall, exploded, pieces flying everywhere, his skull crushed on impact, a fire and pieces of cars blew into the audience, and eighty-eight people died.

The worst accident in a race in history.

It was Pierre’s sixth race.

What’s the biggest difference between a professional race car driver who has put in his 10,000 hours of deliberate practice and one who has put in “just ” 1000 hours?

I asked a friend of mine. He said, “reflexes”.

Both drivers pretty much have the same reflexes.

The answer is the rear view mirror. The driver who has put in his 10,000 hours has his rear view mirror adjusted just a few millimeters different from the guy who has “just” raced professionally for 1,000 hours.

How come? Because the more advanced driver is interested in one thing: PREVENTING A HAZARDOUS MISTAKE.

Both have the same reflexes. Both will make the same turns. But the one who checks for more hazards – will win.

If you want to shortcut the 10,000 hours, you check for hazards. You check for more things that can go wrong. Then you will get better faster.

And you will live. You will stay in the race.

I’m divorced and re-married. If you don’t want your relationship to crash and burn and kill eighty-eight people, you watch out for hazards.

Objection #1: Shouldn’t we be optimistic? If we’re always worried won’t that paralyze us? Yes. Yes it will.

If you sit around being paranoid then the worst case will happen. Analysis paralysis.

When a possible hazard comes up, the amateur will sit and worry.

Objection #2: Shouldn’t we move towards positive goals instead of constantly thinking of the negative.

Won’t that attract negativity to us?

Let’s say you are married. A worst case scenario could be your wife or husband thinks you are not romantic enough and eventually leaves you.

Now you will be anxious, sad, jealous. Eventually you might drive your spouse away because you are so jealous.

It’s not wrong to think you might not be romantic enough. Maybe you are right. But don’t sit there and be worried about it.

How do you take action. Spend one minute today being romantic. ONE MINUTE. Maybe tomorrow you can do two minutes.

If I’m worried I’m going to be fired tomorrow then there is a lots of actions I can take.

Maybe take on side projects. Be a consultant. Speak at conferences. Look at the various ways one can make money from home and start to develop those skills.

All of these involve taking action instead of “thinking” or “fearing”.

A “boss” is sometimes called “your superior”. He won’t be superior if every day you take action. Once he fires you, you will be smiling.

One time a boss yelled at me, “I’ve seen plenty of your type come and leave and I’ve survived you all”.

He’s still there. And I’m here.

To succeed you have to make a contribution to the world. The world is one giant story. Uni-verse. One story.

How will the world be better because you were here? It’s not easy. That’s why they say (mistakenly) you need 10,000 hours of practice to make your contribution. Your stamp.

My worst fear in life is to be “stuck”. To not know what the next direction to take. To always sit around thinking instead of doing.

Here’s the secret. The one secret.

The risk is there because everyone is afraid to step out of line and contribute. But you will be able to do it.

When your idea muscle is strong, when you are willing to take the risk that nobody has ever taken before, when you persist through all the things that can and will go wrong, you will make your unique contribution.

I know this works.

Here’s how you do it.

A) Write ten ideas a day. You strengthen the idea muscle very quickly. You start having good ideas.

I always say my life has changed completely every six months since I started doing this. Now I don’t have to say that anymore.

Now I’m getting emails from tons of other people whose lives are changing.

B) Mitigate all risk, shortcut the 10,000 hour rule, by constantly analyzing the worst case scenarios.

Sitting doesn’t do anything. Thinking is just in your head.

Take action every day. Even one minute of action. Because one minute every day compounds much faster than money in a bank.

In other words, ideas happened, risk was mitigated, the world changed.

Pierre Levegh and eighty-eight others died but perhaps 100,000s were saved since then. Energy technology (fuel cells) and impact technology were improved throughout the world.

And today, while Claudia is hard at work, I will take action. I will bring home a flower. I will look at her ideas.

Maybe I can also take a risk. A tiny one. And if I crash into a wall and explode I know I will dust myself off. I will live. I will enter the next race.